JOURNEY TO FATHERHOOD | The Journey To Become A Father

“Click”, and with that I had spent twenty thousand dollars. 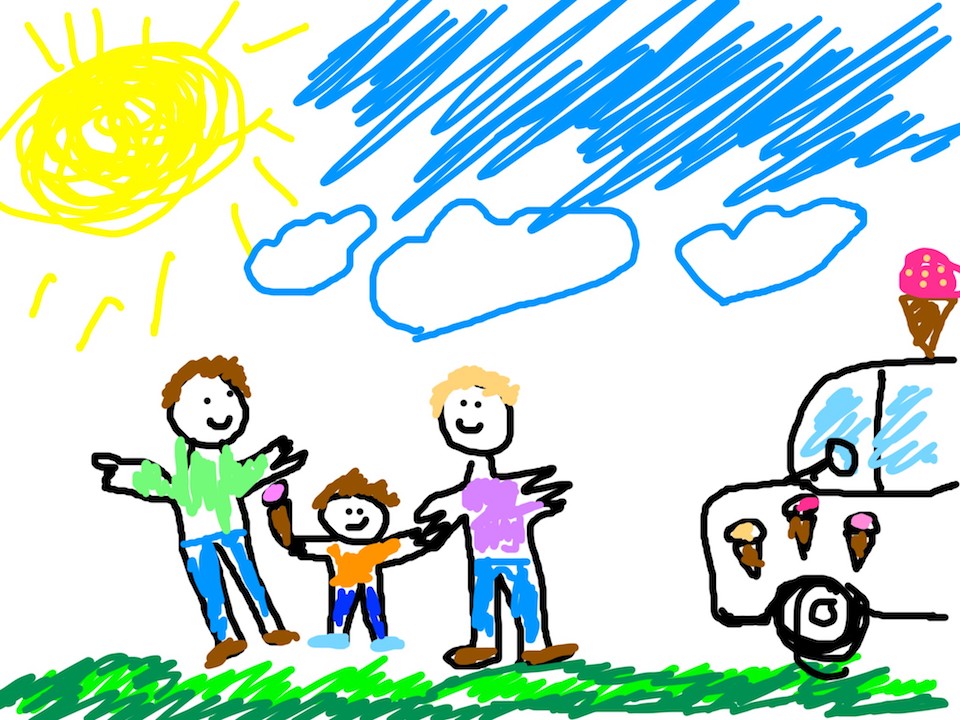 But, I didn’t feel anything. Is this what the super-rich feel when they spend twenty thousand dollars, nothing? What if I did it again, would I feel ecstatic, excited at what was about to happen, a sheer sense of relief after all the months of agonising, or just more nothing? I still had four thousand five hundred pounds to spend on the surrogacy agency… At this rate, I might have to spend a lot more money before I felt something. If spending this type of money doesn’t garner a reaction I wondered, how much does?

The only other time I have spent this sort of money was when I bought my first house and had to put a deposit down. No, hang on, that was the bank of mum and dad, so actually, this is the first time I have spent this kind of money. Which sort of gives you an inkling of the kind of background and money that you need to have, to go through having your own baby as a gay man. It’s a bit like buying a house, except not as easy.

It all started some three years ago. I had met the love of my life: tall, blond, blue eyes and muscular, in a languid kind of way. In fact, easy on the eye, *Grrr* – if you know what I mean ;o) (Sadly he knew it too…) I’m no looker, so I have to try hard to get a man’s attention. He was easy to get along with and we sort of clicked. We met when I was having the car serviced. Having said hello on Grindr before (this was outside my usual haunts), and with time on my hands, I suggested we had a bite to eat. We started to meet up each weekend, then had the monogamy chat, and the rest, as they say, is history.

The first time we mentioned children was when we were talking about what we wanted to do with our lives. He wanted to work in finance, as for him it was like playing an instrument, music to his ears. I wanted to reach the top of my profession and one day get into politics. And then the ‘c’ word was mentioned. And what about having a family, children? I think it was me that said it. Lots of my friends agree that I have always talked about becoming a father. Both he and I were brought up in very traditional middle-class families, where, once we grew up, we would: meet a girl, get married, buy a house with a Labrador, park a Volvo in the drive and have 2.4 children. Well, obviously that plan hadn’t worked out for either of us. I had the house, a BMW, no pet, a new partner and was now thinking about children.

“Yes, I would” he said and we left it at that. I think a gay man’s biological clock does exist, but unlike a woman’s, it is slower and the alarm doesn’t sound until your mid-thirties. I think I only met someone once who was in their twenties, who wanted to have children. It was way off my radar. My twenties I spend shagging, clubbing, being thin, losing my hair, getting more muscular towards thirty and developing a career path. I lived in London, Manchester, Leeds (long summer nights spent in the courtyard next to Queens Court, steadily getting more intoxicated with the growing throng of gay men buzzing in the background, like a flock of birds preening on a South Atlantic Beach), London again, Bristol and the West Country. At the start of my thirties, I settled once more in London. I didn’t have as much sex as some, but perhaps a lot more than others. Now however, in my thirties, what I wanted was changing.

I didn’t want drink, sex and spending hours in an obligatory circle with friends in the middle of the dance floor till 5am. I wanted more ‘quality of life.’ I had reached a stage, where money wasn’t a struggle and more expensive holidays were the norm. (Think Italy, Barcelona, a Conde Nast Traveler top 100 hotel snuggled in the hills of Gran Canaria, half an hour from Playa Del Ingles.) I wanted to find a community (still do) a bit like Leeds, but down south, where I can pop for a pint after work and not just go through the endless cycle of work, home, bed, work, home, bed.

We came back from holiday in August and I saw an advert for the ‘Alternative Parenting Show’. I looked it up online and found out that it was at the Grand Connaught Rooms in Covent Garden. So, I suggested that we went along and have a look. Come late September, we headed out one summer Sunday through the tourists at Covent Garden tube, past the Mason’s Hall towards the Grand Connaught Rooms. As we got closer the butterflies in my stomach began to build. Unwanted thoughts started to enter my mind. “Oh no, we’re going to be identified as gay men in the middle of the day, out in the open!” and, “as a gay couple looking to start a family”. It felt like I was 18 and going through the process of coming out all over again. I had goose pimples and felt the hair standing up on my arms and back. As we approached the first step into the Grand Connaught Rooms, my mind shrieked out to, me, ‘run!’ Calm down I thought, I’m a 35 year old gay man and if I’m not old enough now to face life’s challenges, then, when will I be?

And that was how it started. Having children is a complex business, it is a journey of feeling. Until I started the process, my life was governed by hard fact and judgements based on outcomes. ‘If I want this, what will it cost me, what are the implications, how will this effect where I want to be, how will this affect those around me, what else do I need to do to make sure this happens?’ Thinking about having children, starting the process and getting underway for me, has been unfathomable, as it’s not possible to judge, quantify the impact, people’s reactions, expected financial outcomes when so much emotion is involved.

In Britain, as an LGBT community, we have attained so much, from equality in the eyes of the law for the age of consent through to marriage. However, the attainment of children and family life as well as established conventional norms, for what it is to be a gay family are still being designed and formed. In the next few issues, I would like to share with you my experience, following my own trail, as a gay man looking to have a baby through surrogacy. I will explore some of the key issues, such as: investigating where to start; the money; family, friends and your community; Health issues; politics and legal issues; and of course, the journey including taking the leap, and the various steps I encounter (sperm donation, choosing an egg donor, choosing the surrogate etc). So follow my experiences in THEGAYUK and on Twitter.

Next time, I want to take a look at the money. As the Thunderbugs once sang “It’s all about the money, dum, dum, de, de, dum.” At least, it is, to begin with.