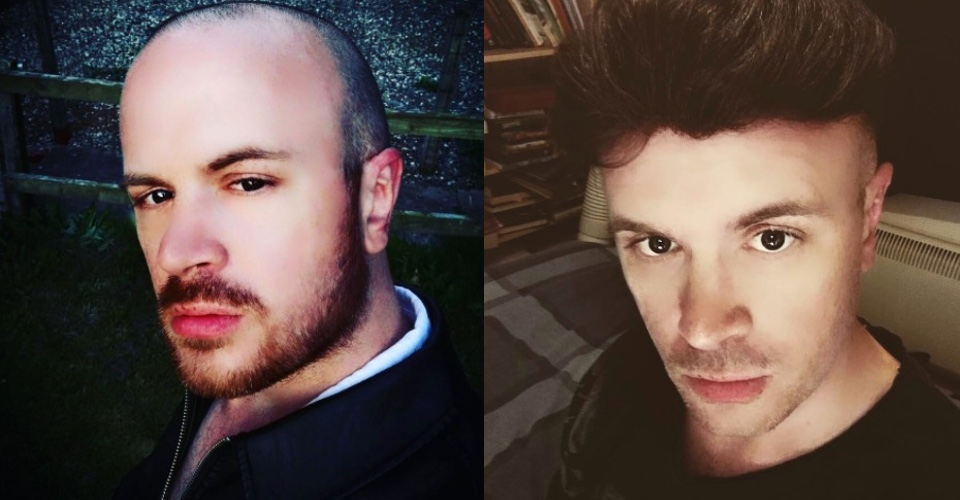 OK let me start off by saying that this is a personal journey I took, and obviously, this may not be for everyone, but for anyone dealing with hair loss, this is a viable option.

So, what am I talking about? I’ll say it, the dreaded Toupee word. However this is not the sort of thing that looks like an Ikea rug strapped to your head, this is a sophisticated hair replacement system. Now I’ve been dealing with thinning hair for best part of 8 years, and 3 years ago I decided to bite the bullet and shave my head down to grade zero.

Initially, I tried my damn hardest to rock the shaved head look and on the surface, I tried to portray confidence and not giving a s**t about my rapidly reduced hairline. But secretly I hated it and loathed having to re-shave my head every few days so that my natural 12 hairs, on the top of my head, wouldn’t show through.

I spoke to psychologist Emma Kenny about the psychological effect that hair loss can have on some people. She told me, Losing hair can be unbelievably traumatic and can make the individual feel unattractive and lead to low self-esteem. Hair is a hugely defining part of who we are and losing that aspect of our personality is painful. Being able to maintain and retain our image isn’t about vanity, it is about self-protection and helps to encourage positivity

Obviously, some people really don’t care about hair loss and kudos to you for rocking that look friends, but to me, it was not a pleasant experience. When I was in my early to mid-20s I’d had every style and colour under the sun, and I loved the process of doing my hair in a morning before I went out. By 26 I noticed that my front hairline was starting to not be in the place it used to be. At first, I didn’t think anything of it, but as the years went on, I was having to spend longer in a morning styling my hair to hide the fact it was thinning. I even tried those hair fibres, but I was constantly worried that I would get caught in the rain and they would all come tumbling out.

After shaving my head down to a grade zero I resigned myself to the idea that I wasn’t going to get it back, while the idea of a hair replacement system had been on the edge of my mind, I’d heard that these things could be horrendously expensive, with some systems setting one back nearly £2000, so I obviously pushed that idea to the back of my head, secretly hoping that maybe in 10 years, the price wouldn’t be that expensive.

Every so often I would check some of the companies out, but still, the price made me think twice, but then I spotted a company near where I live that I hadn’t heard of before. I thought, maybe an independent company might be a little less expensive, especially if they didn’t have a bigger business name behind them…and so I met Tom Fish, owner of Hair Replacement Hub based in Telford. After initially emailing him about the price, I was pleasantly surprised to find out he only charged £450, with no hidden charges.

So I spoke to him and immediately felt at ease, because he told me straight away he actually wore one of the systems himself. He was friendly, yet professional, and arranged a face to face meeting with me for a consultation. I wanted to ask him literally everything because this was still an investment to me. How could he charge so much less than some of the other companies? He was kind enough to come and visit me at home, and straight off I had to remind myself that he was himself wearing one of these systems, because I couldn’t clock it at all. It was only when I practically had my nose up against his head did I finally believe him.

We spoke for over an hour, and I wanted to ask him about his experiences. He told me he’d started losing his hair at the young age of 21, and had paid nearly £2000 for one of these pieces, and he had felt this was way too expensive, so four years ago he started his own business. Determined that other guys who experience hair loss shouldn’t have to pay through the nose. During my own research, I had seen some of the pictures from other companies based around the UK that did kind of give me pause for thought. They looked a little too fake for my liking, almost like it was plonked on the head, and a little unnatural, and in some cases the colour was way off.

Tom took his time to show me pictures of many of his clients, these systems all looked absolutely amazing and natural. Tom told me he used human hair in the systems and an “ultra-thin skin” base so that it looks as natural as possible. I kept scrolling through. Getting more and more comfortable in the decision I was making, and then I had a shock. A guy I recognised was among the pictures…I’d had no idea he even had one. I was suitably impressed. I asked why Tom worked alone, and his response was great. He wanted it to feel like a more personal approach, because he knew exactly the nerves one could feel walking into a salon when there are other people about, so he works from home, or will visit clients so that it’s just a one on one experience and having been through it all himself, he knows that for the people who choose to have one of these systems, the privacy he affords helps put people at ease.

At the time of consultation, I still had a shaved head, so Tom asked that I let it grow out a bit first so he could get the best match and style for me.

In the meantime, I contacted the guy I recognised, Hari and asked him about his experiences with Tom and Hair Replacement Hub. He told me,

“Tom has literally changed my life, I’d spend about 90mins every morning styling my hair to hide my baldness and now it takes all of 10 minutes max! He’s given me hair confidence that I have always wanted. I know when I leave the house my hair is secure and unnoticeable which has lifted a huge weight off my shoulders after reading all the myths about hair systems and lastly, Tom inspired me not just from his hair systems but for Tom being Tom, To know that a man who actually wants to help people and has so much passion for his job is out there really restores your faith in humanity”.

Fast forward 3 weeks, after letting my natural hair grow out a bit so that the system could be blended properly, I decided to visit Tom in Telford where he keeps a small home studio. He plopped me in the chair and turned on some music for me. He showed me the system, and it was an exact match to my hair colour, so we were already off to the promising start. I felt at ease as Tom styled the sides of my hair to help create a template for where the system would sit.

He also trimmed my facial hair, and washed and practically massaged my head, before shaving the centre-right down so that the bond would adhere securely. Once the system was on I looked like a mad professor, but Tom being the professional that he is, expertly started to cut and shape the system to fit in with what I’d asked for. I wanted it longer than usual on top because I’ll be damned if I go three years without hair to then not whip it back and forth once I have it again.

But this strange feeling came over me, I’d been so long without a full head of hair, I was kind of overcome with not only gratitude to Tom but a sense of relief that I was me again.  Another great service Tom provides besides the re-bonding and restyling of existing hair, which has to be done usually every 3-6 weeks, he also sells the products that are needed to keep the system in tip-top shape. The systems are fairly durable, and won’t need to be replaced often. Most last around 8 to 12 months depending on lifestyle, with even a very active person getting a solid 8 months out of them. But going back to Tom reduces the cost down, by £100 for the replacement

I cannot express how friendly, and professional Tom is. He knows what he’s talking about, and he knows how it can feel to lose hair, so he wants every person who goes to him to feel 100% better about themselves, and I’ll tell you what, I certainly do.

*Emma Kenny does not endorse this company or particular hair loss solution. She merely provided a psychological analysis of the effect hair loss can have on some people.