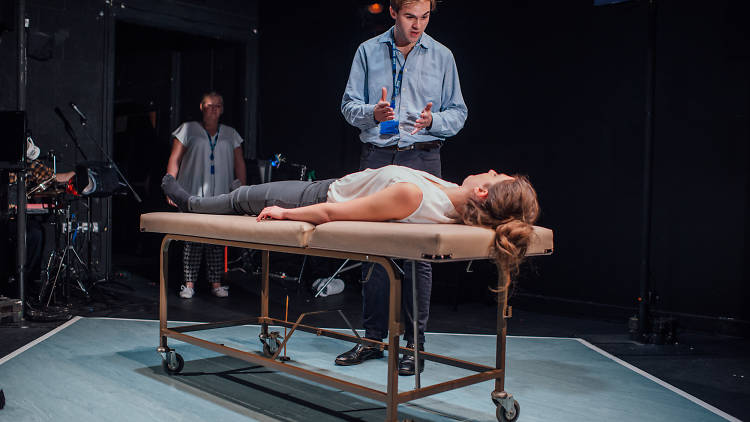 Sophie is a jobbing actress who’s working in a terrible soap opera, playing a surgeon with a brain tumour. She’s making up her income having endless neurological examinations performed on her by trainee doctors. Struck down by a series of strange nervous system symptoms she’s left unable to function and feeling desperate with paralysis, spasms and seizures. Naturally, modern medicine has an answer. Even if there’s not a cure then there’s a name for what’s happening to you and some sort of treatment, isn’t there? But what if every doctor you meet tells you that it’s good news and the tests are negative? The more doctors you see (and there’s a lot of them), the more tests you have and the more time passes your symptoms get worse and there’s still no answer. Is it still ‘good news’ about how normal your test results are? Welcome to the world of Functional Neurological Disorder, a surprisingly common and debilitating condition.

Still Ill returns to the The New Diorama Theatre near Warren Street after a successful run in 2016. It’s an achingly sad play with touches of comedy but an overall sense of optimism. It’s not as grim as the subject matter makes it sound. The company have carefully researched their subject under expert guidance and come up with a witty piece of theatre about a poorly understood area of medicine (and indeed life).

The cast of three skilfully play multiple parts and it’s convincing and watchable albeit with the odd off note where it feels like they’re over-egging the pudding. There’s a strange backing track of live music and a sense of physicality to some of the action and it almost works. This is well worth watching not just to gain an understanding of a rarely mentioned illness but to see what appears to be a sane response to a mad world.