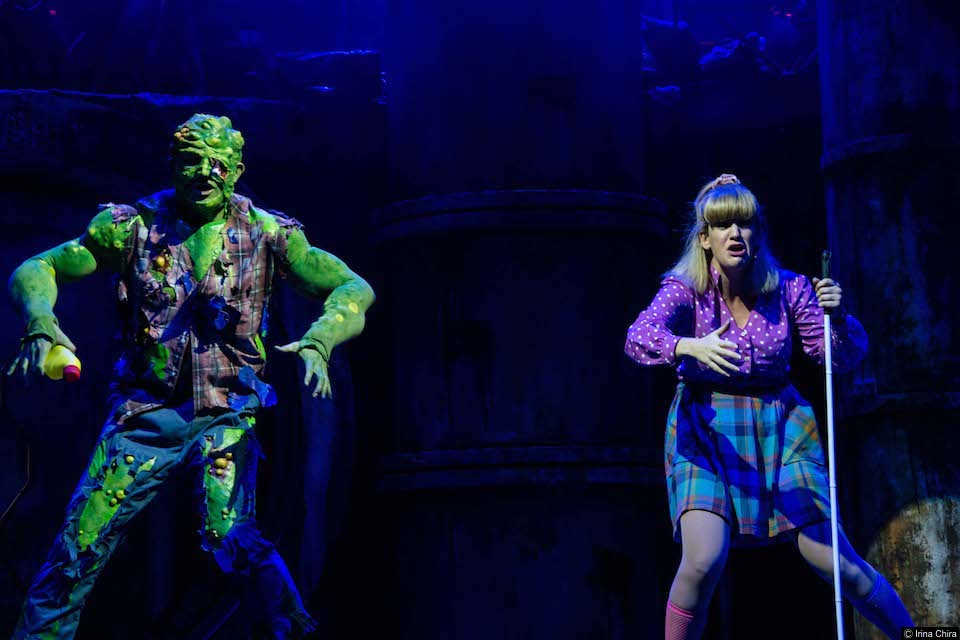 There’s a monster loose at the Arts Theatre in London; it’s toxic, it smells, and it’s completely hilarious!

It’s The Toxic Avenger, the show that was originally a movie (circa 1984) and just last year played at The Southwark Playhouse to rave reviews. Well, The Toxic Avenger is getting revenge by coming back to a much larger theatre, with a superb cast!

In a nutshell, the show takes place in New Jersey. You know the place, people only pass through there to get to the bright lights and big city of New York. Well, New Jersey is where the denizens of Manhattan dispose of all of its waste – not just garbage but everything and anything that they don’t want, New Jersey, unfortunately, gets.

But in a town called Tromaville, New Jersey, which gets the worst of the wasted, there is nerd and aspiring earth scientist Melvin Ferd the Third (Mark Anderson), his mom Ma Ferd (Natalie Hope), Sarah the blind librarian (Emma Salvo), and host of other characters played by Ché Francis and Oscar Conlon-Morray, named appropriately as black dude and white dude. But when Melvin decides to find out who is responsible for the vats of toxic waste in Tromaville, he plans to put a stop to it. His investigation leads to the Mayor (Hope again), but when she finds out Melvin is on her case, she gets her two goons to get rid of Melvin, and they throw him into a vat of toxic sludge. But Melvin does not get killed, he comes back bigger and better than ever – he’s been transformed into “The Toxic Avenger” (a/k/a Toxie)!

Toxie attempts to get his revenge, but in the meantime, blind librarian Sarah has a thing for him because she thinks he’s French (though when Toxie was Melvin he had a huge crush on her but she rebuffed him). Meanwhile, the Mayor is still up to no good and vows to kill Toxie no matter what it takes. But hilarity (and lots of physical comedy) ensue; lots of running on and off the stage by the cast, Sarah doing everything she can to get with Toxie, and the brilliant Hope has a scene with herself as both the Mayor and Ms Ferd – and one time she’s on stage as both characters! It’s a tour de force performance! Will Sarah and Toxie find love with each other? Will the corrupt Mayor have her way and turn Tromaville into more of a toxic waste dump? Will the front row of the audience escape unscathed? You will have to find out and buy tickets to this must-see show. And did I mention that it’s a musical? Everything you want and more is this show! And the cast are brilliant!

It’s hard to single out any one performer, but I’m going to. Of course, Hope gets the most exercise (and laughs) as both the Mayor and Melvin’s mother, but it’s Salvo’s performance that is most memorable because she’s playing a blind woman, and it’s so believable! And she’s so funny! Kudos to the cast, and production team, including director Benji Sperring, for bringing us a show that’s one not too miss. It’s got everything a musical should have; escapism, fantasy, great story, amazing performances, and some rocking songs. Buy tickets for this show now!

The Toxic Avenger The Musical is now playing at The Arts Theatre in London until December 3, 2017