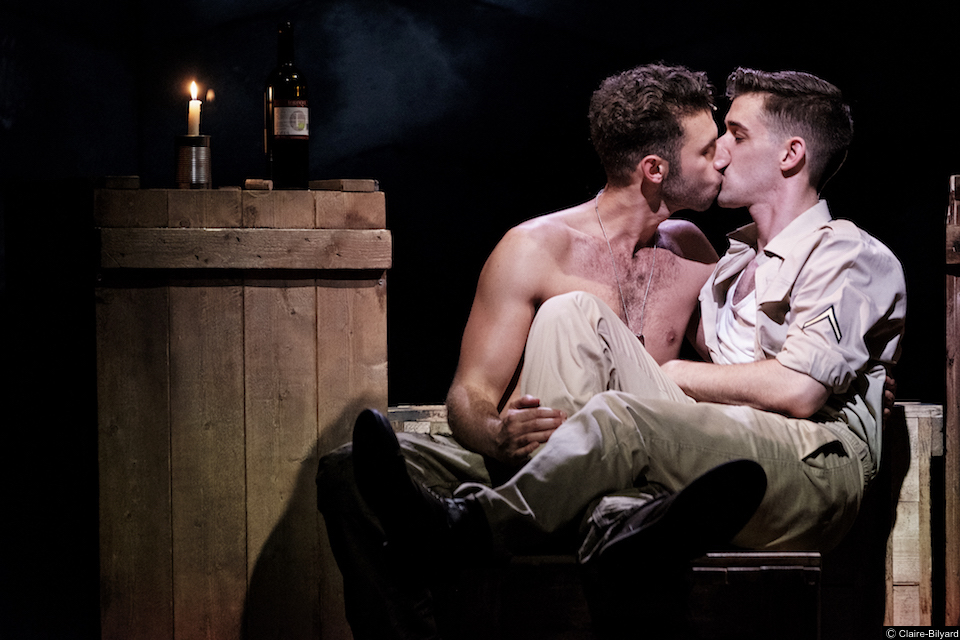 A gay fictional World War II love story that tells some of its story via musical numbers is now playing at the Charing Cross Theatre.

In Yank!, Stu (Scott Hunter), also given the name ‘light loafers’ by his 89th squadron fellow soldiers, is an 18-year-old wet behind the ears soldier drafted for WW II. His fellow soldiers know that he is gay, hence the nickname, but they must also contend with trying to save their lives as battles loom ahead. It’s not too long before Stu and fellow soldier, the hot and sexy Mitch (Andy Coxon), get together. After a few side glances and more than a few cheeky conversations, they expectantly kiss when they’re forced to share a bunk bed (ah, it’s all of our fantasies!). But is Mitch really gay or is he caught up in the moment? Their sort of relationship takes a turn when Stu is offered a job writing for Yank Magazine (it might just as well be called Wank magazine). It’s a job Stu wants because it will take him away from fighting on the front lines and will hopefully one day help him to publish the diary he has written of his exploits as a soldier. Stu’s new position takes him all over but he begs his editor Artie (Chris Kiely) to go to Hawaii as this is where the 89th is fighting, and it’s of course where Mitch is. Stu can’t stop thinking about Mitch and they rekindle the romance they had, well now it’s more than a romance, it’s a full blown relationship as Mitch discusses them moving back to his hometown and living together. But it’s the evil Tennessee (Lee Dillon) who steals Stu’s diary and turns in into the authorities in a time when homosexuality was absolutely forbidden in the army. And things will not be the same for Stu and Mitch and the rest of the 89th- war, death, and jail rear it’s ugly head.

Yank! is reminiscent of the war musicals of Rogers & Hammerstein (South Pacific) where romance, between a man and woman, was inter-spliced with memorable musical numbers. In Yank!, brothers David and Joseph Zellnik have created a gay WWII love story that pays homage to these 1940’s musicals and cleverly takes the name of their show from the WWII army publication Yank, the Army Weekly. Having opened up, appropriately, on gay pride weekend, Yank! is a celebration of gays in the military, but it does make a few missteps along the way. Hunter is fine as the scared soldier Stu, but I didn’t find him as charismatic as he should’ve been, while some of the staging and songs are a bit off, including a song about pin-up girls (“Betty”) that goes on way too long. Coxon shows that he’s the true stage actor among the cast – his acting and singing are excellent, while the rest of the supporting soldiers do the best they can do with what they have been given (a scene about gay telephone operators is a bit dreadful and really doesn’t need to be in the show). There is at times clever use of the stage, including during the battle and interrogation scenes, and Sarah-Louise Young is just about perfect in her various roles. Director James Baker just doesn’t get it exactly right in making this show a must see event. While it’s a show that is light on its feet and has a few snappy musical numbers, it’s not groundbreaking nor particularly excellent.

Yank! is playing that the Charing Cross Theatre until the 19th August