Vile thug has homophobic rant at Street Performer in Nottingham 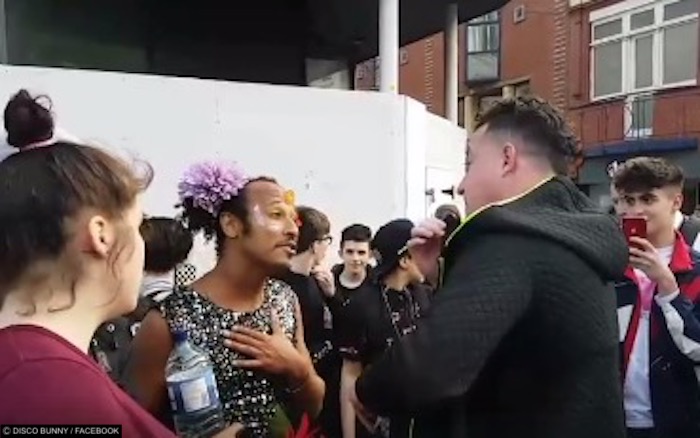 A street performer known as Disco Bunny has shared footage of him being abused on the streets.

A street performer known as Disco Bunny has shared footage of him being abused on the streets.

A performer known as Disco Bunny (Pablo Woodward) was entertaining the crowds in Nottingham city centre when he was set upon by a man in the crowd who took offence to Disco Bunny’s look. The man then proceeded to homophobically abuse the performer and at one point called Woodward a “f**king nonce”.

The unnamed man repeatedly asked Disco Bunny who he was sexually attracted to in front of a gathering crowd. When Disco Bunny refused to answer the man’s question the thug launched into a foul-mouthed six-minute rant in which he using the words “nonce” and “batty man”. He also said that he didn’t trust the performer with his six-year-old little boy. During the tirade, the man grew more and more agitated and at one point took off his t-shirt.

Disco Bunny, who travels up and down the country to entertain people in city centres, uploaded the footage on to his Facebook page where it has been viewed over 350,000 times and has been shared nearly 2,500 times.

The man’s rant drew a shocked crowd who jumped in to defend the performer. At one point two people hold up the rainbow flag behind the street performer. Speaking about his supports Woodward said, “I thank the public for their support and for their respect of my work and each other – and for their restrained behaviour. I bear no grudge.”

Police in Nottingham have begun an investigation after a hate incident was reported, Police said, “We have spoken to the victim, a 39-year-old man, and are aware that a video of the incident, in which homophobic abuse is shouted, has been shared online and this will be investigated as part of the enquiry,” a statement read.

“Anyone who witnessed the incident or has any information that could help the enquiry is urged to call Nottinghamshire Police on 101, quoting incident number 729 of 1 April 2019.”