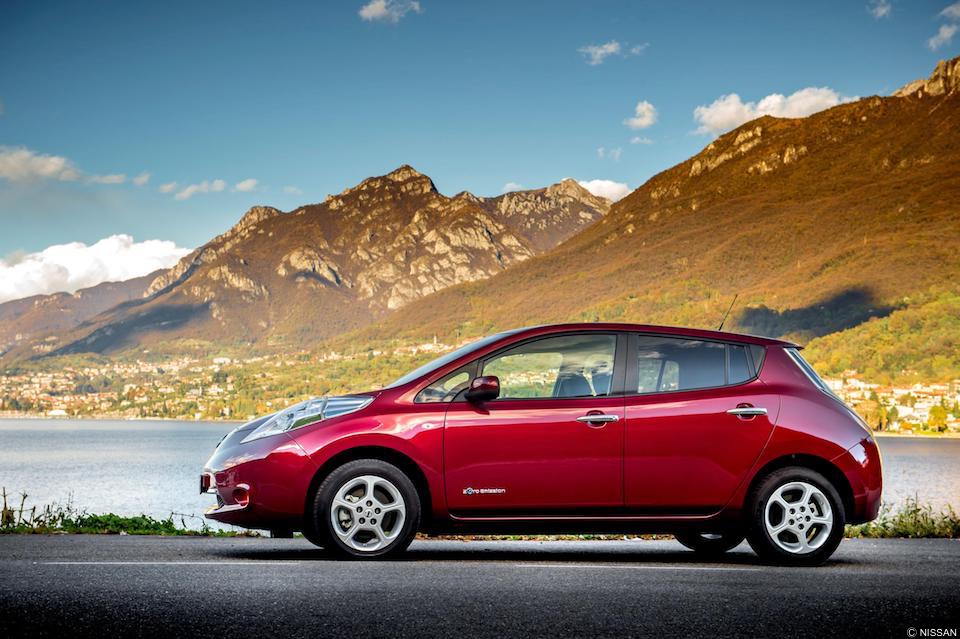 If you see a modern electric car on the roads, there’s a very good chance it’ll be Nissan’s Leaf.  ★★★★

First available back in 2010 with European sales starting a year later, over 180,000 have been sold in the last five years. With several major manufacturers releasing their own electric cars, is the Leaf still worth considering?

One thing that hasn’t really changed in the last five years is the Leaf’s distinctive shape. If I’m being kind I’d say it reminded me a little of a Japanese Bullet Train although you do need to squint see the likeness. While not classically handsome, it’s distinctive and easy to recognise as an electric vehicle if you’re after a bit of social smugness.

It also hides a very roomy interior, thanks in part to the packaging advantages you get with electric cars. With the battery mounted under the floor and the motor being compact, there’s a lot more room than you’d think possible in a car around the size of a Ford Focus.

I liked the high mounted LCD display for speed as it was right in your line of sight even when looking at the road. There’s also another larger screen in the conventional location that shows charge levels and how quickly you’re draining the battery. A touchscreen in the centre of the dash takes care of the infotainment and proves easy to use if not as sharp to look at as other systems from rivals. Overall the interior is well put together but lacks the premium feel VW do so well.

Rear seat passengers sit higher than those in the front so they can see out with both leg and headroom very good. The boot is large but disappointingly has a very high load lip; fine for light items but I wouldn’t want to wrestle anything too heavy up there. There’s a couple of canvas bags for the charging leads which hang either side of the boot which is nice but not as nice as a specific compartment as some electric cars have.

Speaking of charging, you’ll probably want to know how long it takes and how many miles the battery is good for. According to Nissan, you can get over 120 miles out of a single charge but if we’re honest; this is quite tricky to achieve. You’ll need to drive at less than 40 mph with no heating, no air-con and a very gentle touch on the throttle. More realistic is around 80 miles (even I achieved it) if you don’t mind limiting your top speed to around 60 mph.

Treat it like a petrol car with heavy throttle openings, air-con set to freeze and a good chunk of time spent at 70 mph and you’ll get even less. Still, the Leaf was never intended to be a long distance motorway car and to expect it to perform like one is unfair.

The quickest charger Nissan currently offer for home use takes around four hours, the standard offering around eight while plugging it into a normal plug socket will take an agonising twelve hours.

In practice however, most people won’t use all of the charge in a single day while fast charge points are springing up all over the country. Even supermarkets are installing more and more of them whether you slum it in Asda or go posh in Waitrose.

In the week I had the car, I never had less than twenty miles range when I parked up at a charger eliminating any range anxiety I might have had. Further helping this is Nissan’s ‘Carwings’ app which allows you to check charge levels remotely and even turn on the air-con from your smartphone. Impressive stuff.

Those that enjoy driving will find the Leaf much better than they might expect. Compared to the Renault Zoe I tested recently, the suspension felt well set up offering good levels of comfort while still feeling pretty agile around bends. There was also none of the under-damped feeling you got from the French car – any body movement after a bump felt well controlled with no wallow.

I never found myself yearning to go for a blast in the Leaf but neither was I ever unhappy with how it drove. Even acceleration is pretty brisk up to about 50 mph where it starts to tail off like most electric cars.

All but lowly Visia trim get alloys, body coloured mirrors and privacy glass while the higher trims add bigger, snazzier wheels along with more and more toys. Although the top Tekna trim I tested was rammed with equipment including a punchy Bose stereo, incredibly handy around view monitor that gives a virtual bird’s eye view of the car and heated leather seats, most people would probably be happy with Acenta models that are £2000 less. The main consideration for many will be with regards to the battery; do you pay £5000 to own it outright or lease it on a monthly basis?

Leasing may seem like a good option to protect yourself from potentially pricey battery replacement but they are proving very reliable. Some cab firms are reporting over 150,000 miles from the original pack with very little in the way of degradation while electric cars need much less in the way of servicing too.

Although it may be five years old, the Leaf is still a compelling option not just for those after an electric car but a roomy hatchback too. While it naturally gives the kind of smooth, serene acceleration electric cars do so well, the Leaf also offers drivers a little bit of fun should the road get twisty. Apart from that high load lip, it’s very practical too while running costs will be minimal. Motoring doesn’t get more sensible than this.