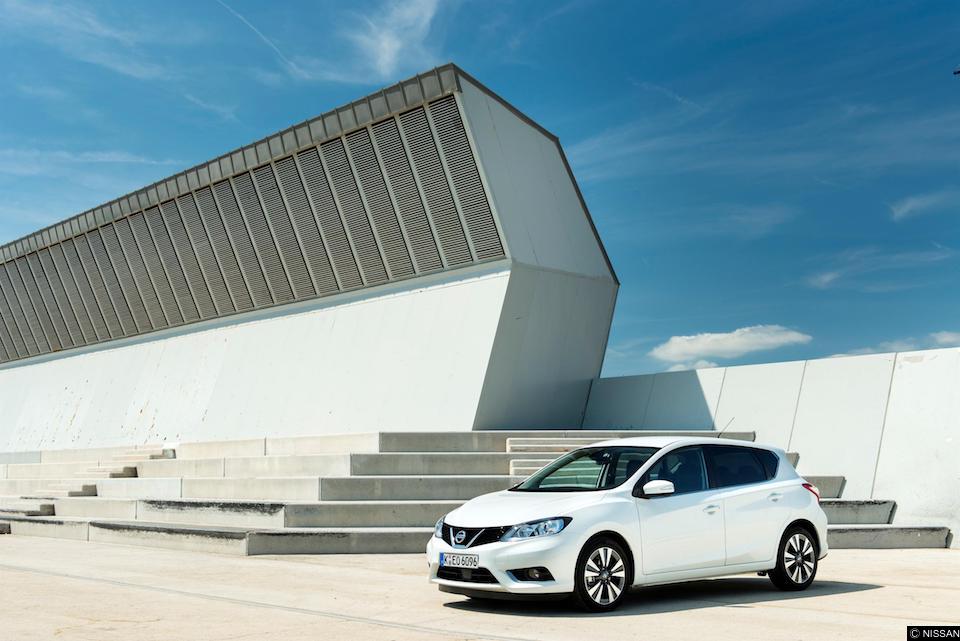 I can’t believe I am going to say this, however despite its relative absence on the road, the Pulsar isn’t that bad a car. Manufactures don’t really make dreadful cars anymore, they just make them indifferent to others that supposedly set the benchmark.

There were some perceived flaws with the Pulsar that I had from the start. It’s not as well thought out in terms of toys as in the Qashqai. I was expecting more. That said what I was given satisfied my needs.

Ok so it doesn’t sound great from the start but stick with it and the Pulsar will get better. For passengers, there is an abundance of room. The rear seat leg room with me behind the wheel cannot be matched in this class. Even cars in the next class up will struggle to match it. If I were given the chance of shotgun with the driver or lounging in the back I’d opt for the rear seat.

Up front as a driver you are offered a few touches of norm for this kind of car. The displays can be altered according to what information you require. The econograph was quite fun to play with. At one point I had the 1.5 DCI 110 humming along to an estimated 74mpg which I think is quite impressive for a car this size. Admittedly that was at a leisurely 62mph with the cruise control on. The average managed over the 200 mile test was 54mpg with my best being 67. I can’t however credit that to the nonintrusive stop start system that saved me 0.20gm of CO2. If you spend more time in traffic you could save more.

Another nice touch is the easy to use satnav that actually gives you the option to use daytime colours at night and adjusted brightness to suit. I could kiss Nissan’s engineers for this. And this is the thing with the Pulsar, it is some of the little things that make it a better car.

Sadly the Pulsar suffers two of my pet hates which are poor switch gear illuminations on the doors and pointless carbon fibre trim. This time the trim that gets a mention in the spec sheet is below the rear bumper. Park the car in such a way that you don’t have to look at this and all is good in the world. Goodness also comes in the padding on the door armrest. It’s as soft as a pillow. Boney elbows will not complain. In fact I doubt anyone will moan about the driving position in the Pulsar. It’s all very Nissan and all very matter of fact to the job it has to do.

Take to the controls and you will see why Nissan has always been easy to drive. In the past they have been a bit woolly, a bit learner driver and tended to appeal to the beige brigade. The gear change is wrist flicking quick and the clutch, while not being the lightest, has a very short pedal travel that further quickens changes both up and down the 6-speed box. If I have one criticism here is that the gate is very close together and until I had learnt to gauge its feel I was slipping it into the wrong gear. 4th became 6th and at one point 5th being 3rd. Thankfully the engine tolerates a lot of revs.

The steering was nicely weighted. It felt heavier than a lot I have tried but this wasn’t a problem. Again for me, it is these little differences that made the Pulsar likeable.

What was puzzling was the handling. The traction control system thwarted any kind of fun but pushed hard it could get a little crazy at times, yet switching it off and its road manners improved. It went from a disco bunny on poppers to Kylie to meeting your mother at church on Sunday when switched off. It would kick in when it felt it was at its set limits but the improvements in handling were noted for the better.

Another nice touch was the stereo increasing in volume as the speed increased and instead of a little, it was noticeable and I liked that. And then there was the 360-degree parking cameras. If you are from the Grand Theft Auto generation that played it from the over the top view you’ll appreciate this. Why more cars don’t have this I do not know. It takes some time to get used to it and what it is interpreting, though once mastered it made for ease of parking without really having to look in the mirrors.

The nice to use Pulsar is a difficult one to sum up and here lies the problem. It does nothing that makes it stand out from the crowd. It doesn’t annoy you in any way. It’s like a faithful friend who listens to your problems, rubs your shoulders, soothes your elbows and then drives you to get cheesecake. It will never leave you standing alone at the disco. If only it could have some drama to excite it, it might just start to be a major player in this sector of the market.