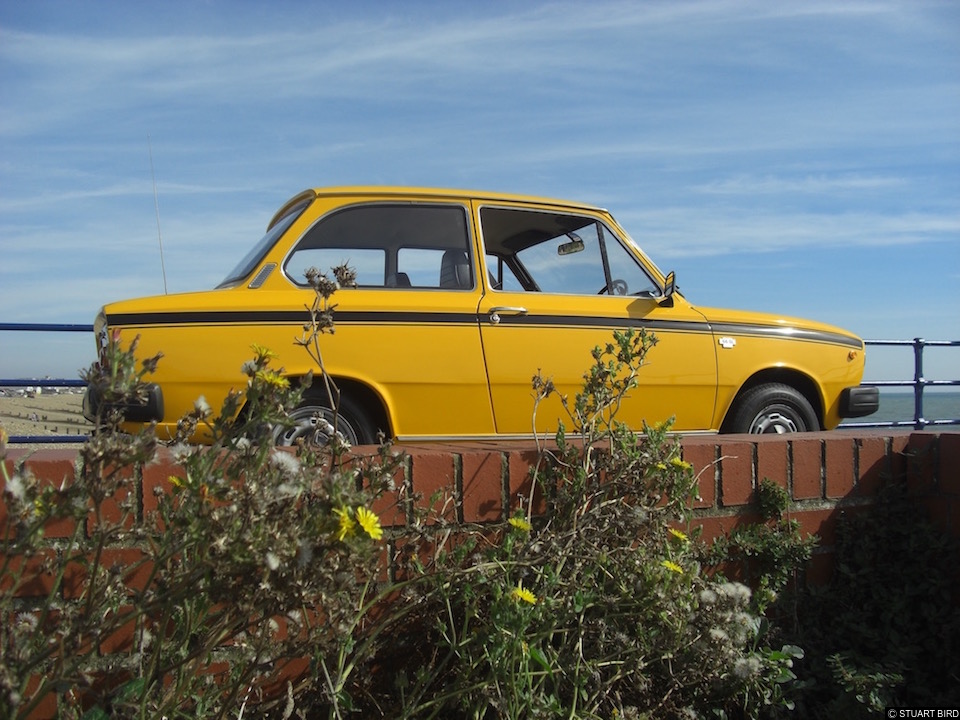 What a strange little creature the Volvo 66 is. It’s not really a Volvo at all. Underneath its square styling lives the Daf 66 and deeper into that is the Daf 55.

Daf’s car division was taken over by Volvo in 1975 and almost immediately they rebadged the Daf 66 to become the Volvo 66. Being safety conscious Volvo they added their stamp to the Daf by fitting big energy absorbing rubber bumpers to coincide with the newly launched 200 series from 1974. Also added was a revised brake system and inertia reel seat belts both front and rear. A first for a small car.

From a country that legalised the smoking of the herb, you can be assured that Daf would not make a conventional car. The interior is quite well thought out in terms of space. The mechanism of the front seat backrest tilts inwards to make getting into the back easier. It’s as if time was taken to think about it. A bit like being stoned and really focusing on something. Thankfully they wrote it all down. And then in the fit of giggles and munchies, someone suggested a transmission made entirely of rubber bands. This was back in 1958 and the Variomatic was born.

The 1970’s were a dark time for the motor industry. The first oil crisis of 1973 caused chaos to those manufacturers who only made big engined vehicles. And there were many who didn’t have small engined cars in their line-up. There was also the problem with the wants and need for the two car family. If there was no small car available, they would look elsewhere. Chances are they would also change the big car to match.

The cost of developing a new car in the cash-strapped 70s was great. Platform sharing wasn’t quite as rampant as it is today. Volvo already had a 30 percent stake in Daf and in 1975 increased that share to 75% taking over the little Dutch manufacture almost completely. A bonus for Volvo was that Daf was a year away from launching their new 900 project. This would become known as the Volvo 343.

Daf themselves were not unknown for sharing development costs by using 1300cc Renault engines in their 55 and bigger 66 models. Using Renault engines was not going to be a problem for Volvo either because they had already worked with the French manufacturer to develop a V6 engine with Renault and Peugeot.

The launch of the Volvo 66 sadly saw the demise of the sporty looking coupe body. If ever there was a company that needed added sexiness it was Volvo. The P1800 coupe that the Saint drove had gone in 1973 with no replacement. There was no sporty derivative of any Volvo.

Sporty it never was, but, a development within the rear suspension set up saw the development of a De Dion rear axle that was mainly found on Alfa Romeo’s of the time. This did give some improvements, not that you would notice it. The performance was still as lacklustre as the models before it.

Graeme has owned Daffy for two years. Despite it not being a total basket case, in 2013 when it was discovered, it was destined for the big scrap yard in the sky. Thanks to Daf owners club editor Richard Butler it was saved and made mechanically sound so it could propel itself once more. In Graeme’s ownership, it has received an extensive restoration to the body. Panels are not readily available so new metal was cut in carefully were needed. The company doing the work really did a great job. Graeme told me that several members of the body shop team hadn’t even seen one let alone knew what a Daf was. A sure sign that we are all getting older or an honour for them to be allowed to touch such a rarity from the normal exotica they worked on.

This 1975 example also has some historical value. On further investigating the car’s history, it is safe to say this was one of the very first 66s to be badged a Volvo and sent to the UK and the only one still in use today! Registered in November 1975 it is missing little touches like the V’s on the hubcaps and the rear seat belts were not Volvo labelled.

The famous continuously variable transmission or CVT drivetrain was used by Volvo up until 1996 in their 440 series though not quite in the same format as in the 66. Quite ironically that this much-maligned system would eventually be used by many manufacturers and even today it is seen as the best alternative by some companies like Toyota and Lexus on certain models.

It is more technical than just 2 rubber bands flapping about underneath. It’s easy to mock the system for its simplistic look. However, if you delve in a little deeper it also relies on vacuums and diaphragms. l am told the belts rarely give problems but the vacuum and diaphragms do. An air leak in the system can cause all sorts of problems. Set up correctly it is easy to see why it appealed to the city driver. A simple gear lever protrudes from the floor. It goes forward or backwards. That is how you know which way it is going.

In motion, it is surprisingly cute. The engine note not really changing but revving more and more. Come off the throttle and it feels like it is winding itself down. It’s not quiet and there was some vibration felt. l was told the system needed a little more fettling.

It’s a fun little car and the owners of these of whom l know several, all seem to be as eccentric as those who own Reliant Robins. They carry the heart of the car on their sleeves with a real passion. As a result, there is an abundance of support out there for them.

And before you ask yes it can go as fast backwards as it does forward.

GCCG member Graeme for the use of his Volvo. http://www.gccg.org.uk