INTERVIEW | Amanda Lepore: Always have the highest heels in the room 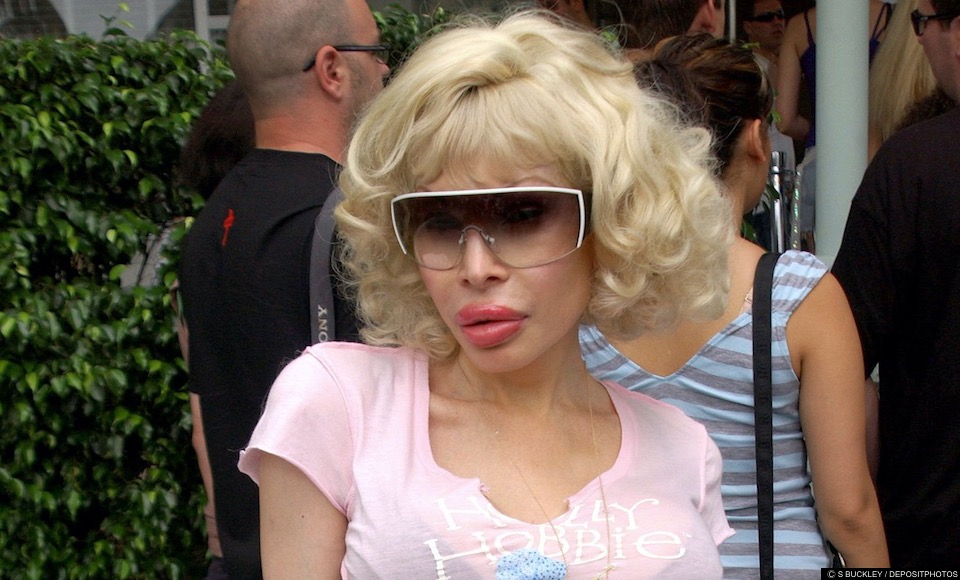 Icons draw attention, but none quite like Amanda Lepore. Her blonde hair and highly accentuated form are the stuff of legends. There are no double takes when Lepore walks into the room. Just one look and instantly you’ll recognise that you’re with a commanding presence and a persona that demands that all eyes follow. In 2015 we spoke with Lepore about plans for her new album and how she might be coming to a wedding near you.

JH: So do you ever get tired of being called fabulous?
AL: No!

JH: (Laughs) and that’s it! You dress to impress and it gets a lot of column inches. Tell me a bit about constructing the Ms Lepore look.
AL: Well, I love makeup, I’m very girly, I really enjoy perfume, and I like to take my time doing makeup and stuff. I’m really good at hair lately, I have a hair stylist too once in a while so that’s really fun and they do a more sculpted type of thing. I do like to show my body off a lot! Even as a child when I was visiting a psychiatrist to get the whole sex change thing, they said I was extremely body conscious because I always wore tight clothes and everything, so it’s just something I liked even before I was in the spotlight.

JH: You’re a bit of an exhibitionist then?
AL: Errrm, I think so. I wear what I like too so it’s sort of for myself too.

JH: Is it important to be talked about?
AL: I kind of just go with the flow. Before all this happened, I had no idea and I wasn’t a very ambitious type of person so I just went with what the cards were giving me. I guess I’m used to it, and I would probably miss it because I’ve had the taste of it, and I’ve made a career of it. So I guess it’s important at this stage but not initially no. I’ve always liked the attention though. Like when I worked at disco 2000 in the 90s, I was on the Joan Rivers show, and people were writing about me that “I was the girl of the minute” and a “Jayne Mansfield lookalike.” so I would always get them (the newspapers) and read them, so I did like it.

JH: Is it quite addictive?
AL: Yes, I think so, and it goes along with how I shaped my career too.

JH: So what is the first thing you do in the morning and the last thing you do at night?
AL: Well, the first thing I do is usually order breakfast and coffee and take vitamins. I’m like a vitamin freak. I learned one time, when I went to an Alexander McQueen sample sale, I took the vitamins without eating. Then I threw up. It was really embarrassing, so I had to get a banana from the deli. I learned that you have to eat if I was going to take all the vitamins and hormones. The last thing I do is either wear something sexy for a man or take off my make up and just sleep naked.

JH: So you say you order breakfast? Do you have room service where you live?
AL: Errrm no, but there are lots of restaurants and delis in my area. So I tend to just shop in my neighbourhood.

JH: It’s been a great couple of years in terms of visibility for trans people. How does that feel for someone like you?
AL: It feels really good, I mean I was ok without being visible and I made myself visible after David LaChapelle. I was always flamboyant about it and made a thing about it but I think it’s good for young people. Especially the super young people with their parents.It’s just much easier to transition and have your parents help. There’s more role models for them as well, there wasn’t really any when I was young, I had no transsexual friends when I first did treatments. It wasn’t until I moved to New York and met other transsexuals, I mean, I would see them at the doctor’s office and everything but I was super young when I went and they were older than me so it just wasn’t really right. I was with a dominant man at the time too so he kept me away from all of that. It’s really important for kids to have a role model.

JH: You’re part of that visibility obviously and part of the story for young people to have a role model. How does that make you feel?
AL: Even before the super visibility, I’d always get Facebook messages and people telling me, “Oh, like you gave me the willpower to transition and do it and everything,” so I knew that I was a role model and it would make me feel really good. I felt like I was spreading happiness. It always felt good being out as most transsexuals didn’t want people to know. Like, they would be more blending in the supermarket and like not have their boyfriends know. So, I think I helped make it more visible.

JH: What’s the best piece of advice you’ve ever been given?
AL: Go blonde? (laughs) I always remember that when I first transitioned that she (the doctor) said it was good that I was young when I first had hormones. So I always tell people to do it before you’re 24. You can change everything but afterwards, it’s harder to take away certain male characteristics. So, I say, if you do want to do it, you shouldn’t wait.

JH: And who would you like to musically collaborate with?
AL: Marilyn Monroe, she’s kind of like an idol. Elvis would be great too!

JH: Which has been the happiest period of your life?
AL: I think now, for sure, like things are the best now for me.

JH: And what is left on your bucket list to be done?
AL: I want to do more music, but have it more theatrical sort of like a Vegas show or like a Broadway show. Hopefully, I could get bigger audiences and more elaborate stage sets and stuff. That would be a dream! I’d like to do acting too, like a nice juicy role that I’m comfortable with. I think film more than theatre because they have more control over it (laughs).

JH: Are you a bit of a control freak?
AL: Yeah!

JH: What are your three top requirements for being a class A socialite?
AL: I think it’s really important to look people in the eyes and be nice with everyone because you never know who everyone is. It’s good karma! I think it’s important to smell nice too… And have the highest heels in the room. Just smelling good is the most important I think. Beautiful makeup!

JH: Is there new music coming?
AL: Well, there is new music coming out, but I was touring so much that we didn’t finish it. I did four new songs though so I’m excited about the new stuff as well but it’s a little delayed. I’m coming out with a book in spring and I’ll probably have a book tour with that. Also, I’m now an ordained minister so I’m doing weddings too which is really fun. I just married a couple and I can kind of do myself and just dress really glamorous and everything. I can look how I like and dress how I want.

This interview appeared in Issue 15, October 2015