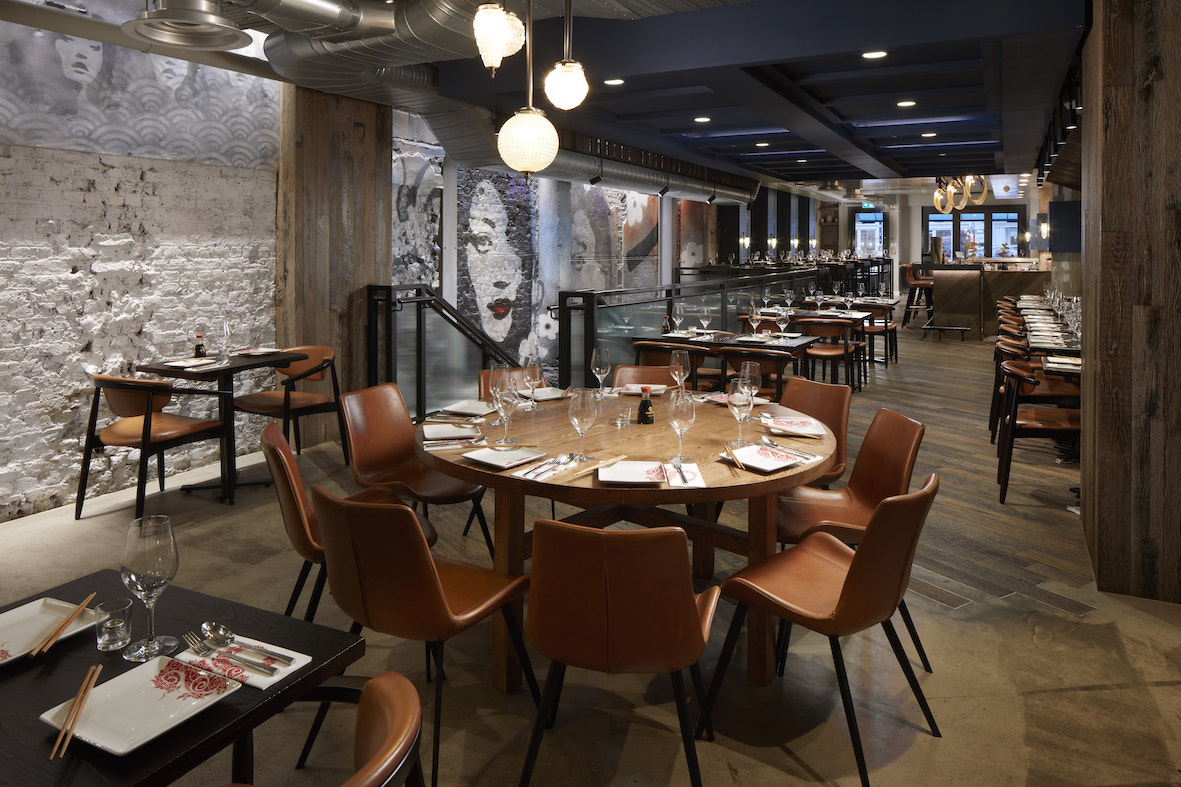 There are two words that I would use to describe PF Changs Asian Table restaurant – absolutely delicious.

Serving authentic pan-Asian food, and it is, no doubt, one of the best of these types of restaurants in town. Let’s get right to talking about the food. My main course – Grilled Asian Marinated (for 24 hours) Rib Eye was the star dish of the evening – and was great. Perfectly cooked, nicely-sized portion, uniquely sliced with a delicious side of wasabi mash, it was good enough to make a grown man cry – it was that good (and reasonably priced at £19). We were also given a mistake dish – a dish we didn’t order but somehow landed on our table – the Chinese BBQ Pork Ribs – and they were simply divine!

Four pork ribs – slow-braised, with a nice slather of savoury BBQ sauce, absolutely moist and tender and finger-lickin’ amazing! Sprinkled with sesame seeds and served with a side of garnish, they were succulent – an excellent mistake dish (a great deal at £11.25)!

My dining companion had the Grilled Asian Salmon – served on a bed of asparagus with red pepper slaw. It was a moderately-sized chunk of salmon, but a bit dry where the marinade did not come through in the flavour and served with a grilled lemon, (£14.25). To go with our main courses we had the Wok-Seared Tempura Cauliflower – slightly undercooked but still good and excellent value at only £4.25.

Our starters were quite amazing as well. I had to have The Original Dynamite Shrimp. There were ten or so tempura-battered shrimp in a spicy Sriracha aioli with a sprinkle of spring onions. The texture was amazing as they were crunchy and were nicely presented in a large cocktail glass – but were a bit too spicy for me – which the menu nor the waiter mentioned. My friend opted for the Handmake Pork Dumplings (£8.50) – four which came with a drizzle of soy & chili mash. They were very good.

We started the night off with cocktails. My Asian Mojito was refreshing as it contained a mix of pineapple juice, honey, lemon and sparkling green tea – ah – a very very nice combination (£7), and it came with a never seen shisole leaf. They, unfortunately, didn’t have my first choice – the Pink Paradise Cooler. My friend had the Tom Collins – an old-style drink with Gin, Lemon Juice, Sugar Syrup, Soda and Lemon Oil (£10). Lots of other drinks on the menu that I will try next time I visit (yes, I will definitely go again). And I will go back not just for the main courses or starters but also for the desserts – they were amazing!

The Kaya French Toast was absolutely stunning! Brioche bread topped with caramelised pineapple, maple syrup, kaya jam and whipped coconut cream – it’s better than it sounds! We were so full but we managed to finish most it! Dare I say it is a bit better than the American version of french toast – there I said it. Also pretty amazing were the Banana Spring Rolls. A bit hard to describe – they were four puff pastries with vanilla sauce and a smattering of berries along the edges with caramel drizzled on top, with ice cream (or sorbet) smack dab in the centre. The presentation on this was gorgeous and the taste even more so. Both desserts get five stars from me.

It really helps in deciding what to eat or drink as the menu comes with pictures. I wish every restaurant would adopt this idea.
The location of PF Changs couldn’t be more central – a minute’s walk from Leicester Square and the tube station. It’s not a massive restaurant – and the night we went (on a Sunday), the place was packed all the time. Even after ten p.m., people were still coming in – on a Sunday night! A mostly youngish Asian crowd all seemed to be very much enjoying their meals and their time there. I have to say it’s a fun place to be at and the hostess was absolutely lovely and cheerful. I highly recommend a visit.