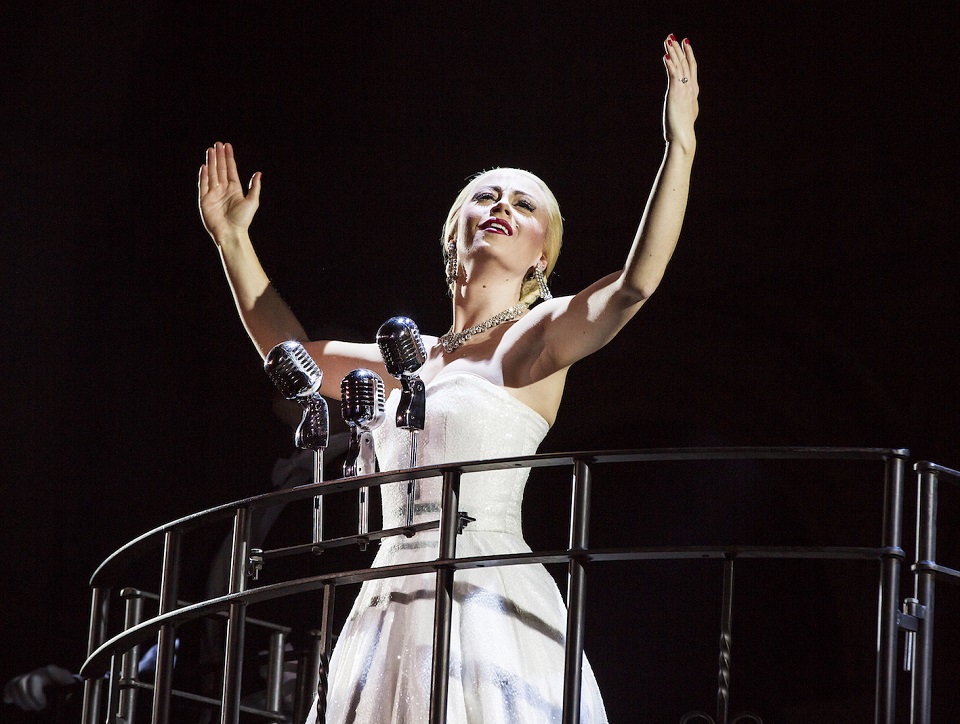 The classic musical ‘Evita’ has returned to the West End to mark the 65th anniversary of the death of Eva Perón, the woman who was revered in Argentina not only as the wife of that country’s President Juan Perón but also as a woman who was perhaps more powerful than her husband.

‘Evita’ takes us through the highs and many lows of Eva Perón. Played by Emma Hatton (‘Wicked’), ‘Evita’ begins somberly at her funeral, attendees dressed in black – and this sets the tone for the first 30 minutes of this show – dark, deep and depressing. With lyrics by Tim Rice and Music by Andrew Lloyd Webber, ‘Evita’ finally finds it feet with the rise of Eva, which was her real name. She becomes as actress in Buenos Aires, but she had bigger ambitions, ambitions that would lead her to meet Juan Perón at a party she’s helped to organize to raise money for San Juan, Argentina, which was devastated by an earthquake. Juan, played by Kevin Stephen Jones, falls head over heals with Eva – he’s met his match – she’s just as strong and confident as he is. But it’s the public that takes to her – they love her and see her as a queen and perhaps more – perhaps as a leader for their country. But as history tells us, Eva Perón never got to see her 34th birthday, she died at the age of 33 in 1952, and ‘Evita’ the musical takes us through this journey, with the help of narrator Che (excellently played and sung by Gian Marc Schiaretti).

‘Evita’ is pure musical joy. There’s not one word in the show that is spoken – the plot is all told in song, and what great songs they are, 39 years after they were first written. This includes the lovely melodies of ‘I’d be Surprisingly good for you’ – when Evita initially meets Juan; to the rousing ‘A New Argentina;’ and the show-stopping ’On the Balcony of Casa Rosado’ where we see, in a breathtaking scene, Evita speaking (singing) to the crowd from the balcony of the palace; also the classic ‘Don’t Cry for Me Argentina’ where Eva sings in the hospital after her fatal diagnosis; and the fantastic and very memorable ‘And the Money Keeps Rolling In’ where Schiaretti really shines, and proves, that he is the true star of this show. As Che, he literally steals the spotlight from Hatton. Schiaretti is a regular concert performer and has performed throughout Europe and has played Tarzan on stage – ‘Evita’ will definitely raise his profile. The rest of the production is just fine, with an excellent supporting cast (especially Sarah O’Connor as the mistress of the President who Eva replaces, and holds her own in the solo number ‘Another Suitcase in Another Hall.’) ‘Evita’ is only on for three months, so if you’ve never seen it before (this is third version I’ve seen, though I’m a bit too young to have seen the original version which made Elaine Paige a star in London and Patti Lupone a star in New York), I urge you to see it. While Hatton is very good, Schiaretti is amazing. And in this touring revival, directed by Bob Tomson and Bill Kenwright, is staged perfectly in the cozy Phoenix Theatre.

For tickets, please go to: