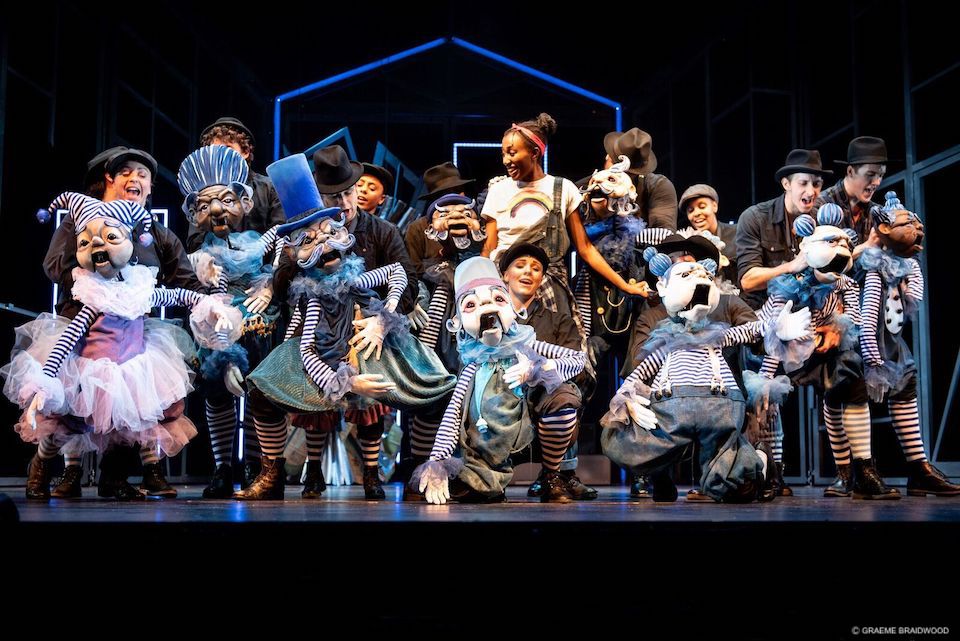 This seriously was the most fun I’ve had at a theatre for a long time. My jaw dropped countless times at the set, costumes, effects and the talent of the ensemble. The Wizard of Oz by Frank Baum, with music and lyrics by Harold Arlen and E Y Harburg, is a story that has been part of every generation, and The Rep pulled out all the stops with this gem.

From the start, you were gripped by Dorothy’s plight, and we highly sympathised with her not wanting to give such a cute dog away. The first scenes, our hearts melted with the use of a real dog who just looked adorable as the scenes moved and swished around him. Chisara Agor played Dorothy with much sweetness and love, making for a very heart-wrenching story live on stage. Chisara was very dexterous with her singing and movement abilities; it made for an unstoppable watch.

The three main characters, Scarecrow (Ed Wade), Tin Man (Dillon Scott-Lewis) and Lion (Kelly Agbowu) were surreally brilliant; sublime in their characterisation. Other than the original film, their portrayal was my favourite, and I felt like a kid again. I was a little nervous that the show may have been more for children, but every generation was in awe and drawn in with the magic and illusion. Ed was superb as the scarecrow with mannerisms being truly identical to the film, but with his own twist, rolling around and walking differently. Dillon was a movement mastermind. His dance ability resulted in a masterpiece performance of Tin Man – the way he walked and moved was an eye-popping effect on its own. I would watch it again purely to watch Dillon as Tin Man. Lion, played by Kelly, though lacking in courage, had vocal chords of an Angel, seriously what a voice! I can see why Lion had many songs as Kelly‘s voice was heavenly.

The set, designed by Angela Davies, was honestly spectacular. I have seen many shows now, but this show really made me feel like it was my first time experiencing new wonders. I can’t imagine how excited the children must have been in the audience.

The character of Oz was incredible – a massive head with eyes and mouth that moved as Oz spoke, and it made to appear like it was a real giant’s head. This was worth the wait.

The highlight of the show for me was the Munchkin dance when Dorothy arrives into the land of Oz and crushes the Wicked Witch of the East. The puppets, designed by Samuel Wyer, together with performers puppeteering them, dazzled the audience, and I just kept hearing ‘wow’ and ‘oh my god’ from all around me. The detail of the characters and the versatile movement of each character was a stroke of genius. I could watch that routine over and over again.

Never have I wanted to recommend a show as much as The Birmingham Rep’s The Wizard of Oz.