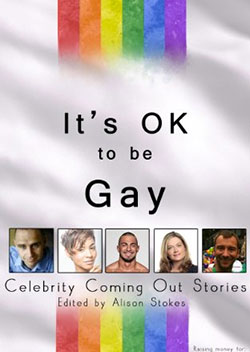 It's Okay To Be Gay

It's Okay To Be Gay

It’s OK to be Gay is a brilliant new book featuring the coming out tales of a number of high profile personalities. Edited by Alison Stokes, It’s OK to be Gay has been created to raise money for the charity Diversity Role Models.

It’s OK to be Gay contains the coming out stories of a diverse range of LGB people. It may have been too easy for the book to comprise of the usual gay celebrities telling the same tales we have heard many times before. What It’s OK to be Gay does is feature a number of prominent LGB people who discuss their sexuality, their coming out, and how it has shaped their lives. It’s an interesting read and I found myself relating to many of the situations the contributors had faced and the emotions they had experienced.

The balance of It’s OK to be Gay is just right; the tone is frank and matter of a fact, but not in a way that is shocking or headline grabbing. It’s a collection of real accounts that many readers will relate to. There is something for everyone.

The one story that stuck out for me was that of the great Phyllis Opoku-Gyimah, co-founder and director of UK Black Pride. Many of the stories show that coming out can be a positive experience, but this particular story shows that it is not always plain sailing. There are some of us who experience negative reactions when coming out and Phyllis’ story is a stark reminder of that. It covers not only being a lesbian, but also black and from a religious household. However, it’s not a story that focuses on the doom and gloom, and Phyllis’ journey demonstrates that each negative experience can be turned into something wonderfully positive.

Another story that drew my particular attention was the inclusion of the singer Diana King. A long-time admirer of Diana having been brought up on her music in my own mixed race, multi-cultural household, it was interesting for It’s OK to be Gay to feature a coming out story from someone who lives in a country where being gay is not widely accepted. In Jamaica it is a real risk that LGB people can be beaten or even killed due to their sexuality. I feel it is of the utmost importance that a book of this kind covers cultural difficulties that some LGB people can face, and it achieves that with flying colours.

As a whole package, It’s OK to be Gay covers all bases. The inspiring people who have contributed their stories come from all walks of life, which instantly makes this book endearing. Perhaps it’s true to say that several of the stories are quite similar, but it does prove that although our coming out experiences are as individual as the people we are, there will more often than not be those similarities. The majority of us experience the same worries and apprehensions when faced with coming out.

I thoroughly recommend getting your hands on It’s OK to be Gay. It’s a delightful and well put together book. I believe it will serve to help and inspire younger LGB people as well as reminding the rest of us that it can and does get better.

It’s OK to be Gay is available on Amazon.