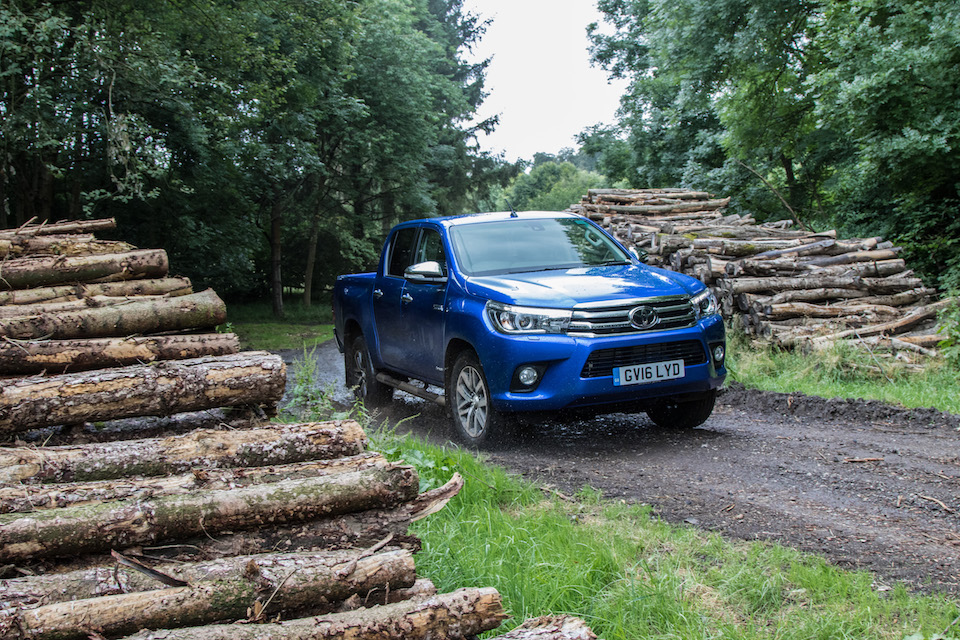 OK, that is a crap intro for a vehicle that is anything but. This thing can seriously take a lot of it. This vehicle really is the king of the pick-ups.

I was in a bit of a quandary when I took delivery of Toyota’s new Hilux. I’d trapped a nerve in my shoulder and the prospect of a harsh ride associated with pick-ups didn’t feel me with much joy.

I can say that THEGAYUK covered 200 comfortable miles in the Hilux. It’s not luxurious by any stretch of the imagination. In fact, the front and rear behave like Dr Jekyl and Mr Hyde. The front is soft and composed. The rear is a bit jiggly. That’s how it is with a fully functioning pick-up truck.

I like trucks but in the everyday sense of the word, the Hilux isn’t the best as a poser mobile. The Nissan Navara does that better. The Hilux is a working vehicle. Take a look at any worldwide disaster and you’ll see plenty of Hilux’s new and old on both sides of the law doing what they do best and that is carry whatever is needed to wherever they need to get to. There are many “classless” vehicles out there but non-so-classless as the Hilux.

You see despite my little moan about it not being the best in cold harsh terms, it is. Toyota has two particular things in this segment of the market that are essential and that is reliability and dependability.

That reliability just cannot be matched. Think of the original Land Rover. It was simple to put together. It did the job. Sadly it got complicated. A working vehicle needs to be fit for purpose including abuse beyond all limits. Despite not being filled with the latest gadgets for the price, the Hilux isn’t basic. The interior looks and feels purposeful to the job. The stitching on top of the dashboard gives a sense of craftsmanship when in fact it is moulded plastic. The door cards are plastic panels with a token of luxury with a fabric insert on the arm rest. You could put your garden sprinkler on in this to wash it down. It would still work.

The Hilux also has dependability. That go-any-place skill hasn’t come overnight. It has taken 49 years and now 8 generations to get here. If in those 49 years of being a load lugger, you become too complacent and don’t meet the expected needs, a reputation for failing then spreads quite fast.

People LOVE the Hilux. A friend has the last generation model. She will not part with it. I’m not sure if that is good news for Toyota or not that she won’t upgrade but it shows the admiration she has for her Hilux. She works with horses and needs to cross some pretty awful terrain and hills. Her previous 4×4 spent more time in the repair shop than on the farm. We now see her once a year for the Hilux yearly service.

The service intervals are short. 10,000 miles or annual service. Quite short when compared to some in this segment. Servicing on a regular basis as is seen on my friends truck proves dependability of her truck.

I didn’t get the chance to take the Hilux off-road. I did find a badly rutted path made by a muck spreader. I didn’t realise it was a muck spreader until l got home. The air lingered that night in the Avenue. That still didn’t stop me poking my nose underneath. This press vehicle has seen some action. The belly pan showing sign of doing what it does best and that’s protecting vital mechanical items. It’s a testament to Toyota then that despite this evidence the rest of the undercarriage looks up to the task and despite being a new vehicle showed no signs of damage. Vital items such as prop shaft and electrics are high out of the way. Only the exhaust is vulnerable and having sensors built in for monitoring emissions it’s anyone’s guess how well these items are protected.

On the road, it was surprisingly easy to drive. Navigating it around the lanes where l live and in town was quite easy. The auto box doing all that was needed. There was a little turbo lag from rest that l wasn’t too keen on. That moment’s hesitation can sometimes be annoying. What it didn’t do however was lift the inside rear wheel when pulling out from junctions. Something l have noticed other pick-ups doing too easily. So on the Hilux, there was no need to select 4 wheel drive. There is something to be said about a limited slip rear differential in an unladen pickup.

Motorway driving was effortless. Because of the isolation of rear wheels in the cabin, there were only 2 wheels that were able to transmit road sounds inside. I didn’t notice any. And the engine itself, all 2393 of diesel cubic capacity making 148bhp at 3400rpm and 400Nm of torque from 1600 to 2000rpm was subdued unless pushed. Torque is the key figure here and it’s torquey. On the motorway, it will thunder along quietly at legal speeds barely going outside of this range and for overtaking it’ll pick up speed and motor. The in-line 4 will become vocal when pushed during kick-down of the 6-speed auto box and then settle down to a whisper when cruising again.

It’s a big vehicle. The rear bed of the Hilux has increased making it even longer than the last model. Unlike the cheaper Navara, Toyota doesn’t have 360-degree cameras or reversing sensors fitted to this vehicle. It needs it. The reversing camera fitted is OK. The yellow lines do line up, it’s just that the extremities do get a little lost. It didn’t, however, stop me parking within an 1 inch from the bumper of my bus.

I’m not in the workman trade so for me, there is little to recommend the Hilux for use as an everyday vehicle unless that is I want something that has a reputation that exceeds that of all the other trucks out there. 18 million Hilux’s have been sold around the world. Yep, that’ll do it. SOLD.

Quite expensive
Lack of equipment
Noisy when worked hard