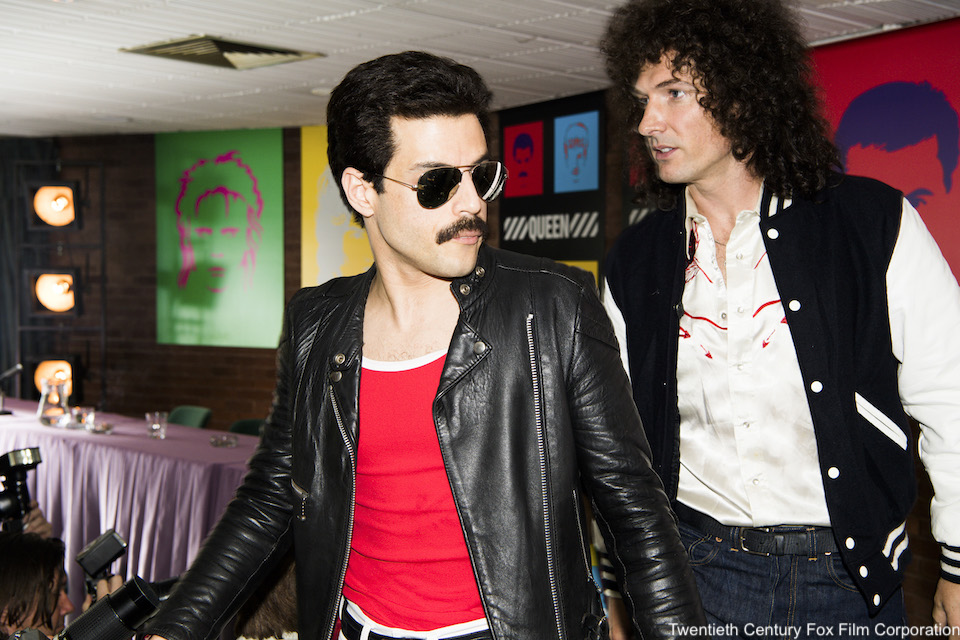 The life and times of Freddie Mercury and his band queen from there humble West London beginnings to storming Live Aid the biggest show the world has ever seen.

Nutshell – Freddie meets Roger Taylor and Brian May and together latterly with John they create some of the greatest rock music of all time. Their songs still stand the test of time today and include heavy metal, disco, 50’s rock n roll, opera and film themes along the way. The film also focuses on Freddie’s sexuality, his struggles with this and inner band dynamics plus hangers-on form the basis of this excellent rock biopic. Over twenty queen songs spanning the 70s/80s and 90s and then latterly comes the spectre of AIDS to bring the third act’s somber drama.

The Gay UK Factor – Freddie is about as big a gay icon as there has ever been and his incredible life story is nothing more than outstanding gay folklore. His love live and decadence is fully covered here in all its horny details but the reminder to a modern young audience about how devastating HIV and AIDS was in the pre prEP era of the 80’s and 90’s is the most important factor here. So many gay men gone but should never be forgotten, Freddie was just the brightest star to be extinguished at that time and this movie brings that right home.

Key Player – Rami Malek is the spit of Freddie, and after five minutes you forget he is an actor. Likewise, Gwilym Lee is a dead ringer for Brian May and this together (The less said about the Bob Geldof lookalike, the better) with the great musicianship helps the biopic feel as real as possible. Of course it is the Queen songbook which is possibly the best that exists besides Abba and the Beatles just when you think you have heard all the best songs there are another half a dozen memory joggers around the corner.

Budget – $52 Million… opening weekend $50 Million USA alone, so that is a result then, They are still the Champions… of the world, mic drop.

Best Bit – 0.57 mins; The biggest concert crowd ever at the time was the mega Queen concert in Rio and when the crowd take over one of the bands lesser known songs “Love Of My Life” you will be joining in too.

Worst Bit – 0.12 mins; The formative Queen band ‘Smile’ (one of them was a dentist) and their songs here are average, to say the least – maybe it is necessary for the structure of the film but speeding through this may have made room for “One Vision”, “Somebody To Love” or “Flash”.

Little Secret – Partway through filming, director Bryan Singer left the production and replaced by Dexter Fletcher. Singer the director of movies such as The Usual Suspects and X-men started turning up late, leaving early and then strangely disappearing for three whole days. Rami Malek, in particular, pushed for a change of directors. Twentieth century Fox the studio behind. The Wembley Stadium set for Live Aid was one of the biggest ever and was constructed from scratch as of course the Wembley twin towers have long since been demolished.

Further Viewing – A Star Is Born, any of the Beatles, Elvis or Cliff films, Mamma Mia, Rock Of Ages, Spiceworld, What’s Love Got To Do With It, Can’t Stop The Music, Jersey Boys, Straight Outta Compton, The Pet Shop Boys Movie, Whitney, TGIF but most of all next years Taron Egerton Elton John Biopic Rocket Man which looks incredible.

Any Good – Go for the music alone it is the very best. This is well put together and the live performances especially the mock-up of Live Aid with four songs alone here is sensational. A very enjoyable, exciting, thought-provoking, tuneful entertainment with a sad twist in the tail.