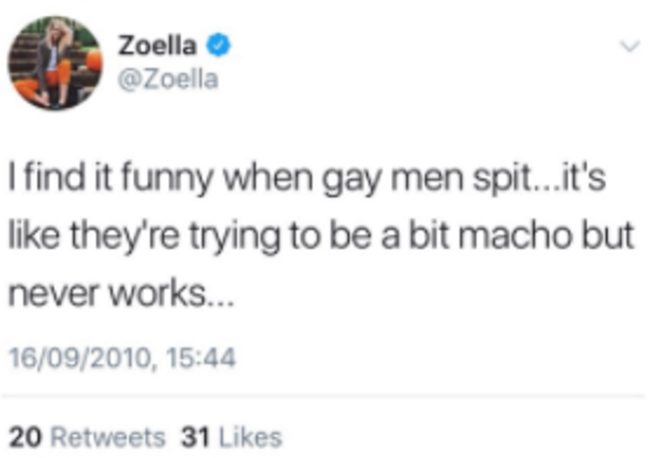 The stars were out in force with the blatant, everyday and casual homophobia this year…

It’s amazing how much homophobia there is on Twitter. Even some of the UK’s most loved celebs have been found to have messages that we’re sure they’d wished they checked for or never sent in the first place. Here are 13 celebs, who made the news this year, caught with having slurs against the LGBT+ community on the social timelines.

One of Britain’s most popular YouTubers, Zoella, was caught with homophobic comments on her Twitter timeline. The 27-year-old who has over 12 million subscribers on the Google-owned platform, tweeted, “I find it funny when gay men spit… it’s like they’re trying to be a bit macho but never works”. The tweet dated back to 2010, before Zoella became the household name.

In 2011 she allegedly wrote a tweet with an anti-trans slur saying,  “Are they honestly letting a tranny in a policeman hat speak to them like that? How odd! Haha x”.

In her apology she wrote, “I’ve seen a few of my old tweets from 7/8 years ago floating around (which I have now deleted) using words like “chav” “skank” and other words I wouldn’t use now as part of my language and lot of them were taken out of context referring to TV shows but I would never say those things now and I’m sorry if I have offended anyone, that was not my intention.

“Obviously that is not who I am today and I’d like to think I’m a little older and wiser! I’m not perfect and I’ve never claimed to be, I’m only human!”

Jack Maynard’s departure from I’m A Celebrity Get Me Out Of Here caused a huge media stir – with millions of viewers at home in the UK wondering what he had done so wrong to warrant leaving the jungle after just two days. Well, dozens of anti-gay tweets were discovered on his Twitter timeline dating back at least five years. Numerous racist slurs were also found on his timeline. The YouTuber left the jungle and it took him nearly three days to apologise for his error. It was an apology that didn’t go down particularly well – after he used a well-worn cliché “I’ve got lots of gay friends” during his interview with The Sun.

Nearly 20 homophobic tweets were found on the BBC’s ‘Artist of The Year’ – Stormzy’s twitter account. The tweets, some of which dated back to 2011 used homophobic slurs, like “no homo” and “faggot” to blast critics on his social media account.

Stormzy was swift to issue an apology. In a statement, he wrote that the messages sent from his account were “unacceptable and disgusting”. He also said sorry and that he regretted sending the messages.

An MP who sat on the Women’s and Equality Committee had past homophobic and sexist forum comments unearthed by the political website, Guido Fawkes. The MP, who unseated Nick Clegg in the last General Election, was said to have used numerous anti-gay slurs on the Morrissey Solo website forum and Drowned In Sound. Terms such as “fudge packers” and driving “up the marmite motorway” to describe gay people were used and a message was written that said gay people were “bitter and resentful about being homosexual”.

The Labour party took action to suspend the newly elected MP for Sheffield Hallam. He also resigned from the Women’s and Equality committee.

This year Katie had problems with Rainbow police cars, police marching in pride parades, non-binary people, transgender people, the LGBT+ community in general. To be honest, her twitter timeline is full of moans and angry tweets – but fear not, apparently she deletes her entire catalogue once a week, so the offensiveness doesn’t last long. Screengrabs, however, are forever.

As long as it’s not near me, sunshine. pic.twitter.com/W9VNHw7yXq

Where to begin. Piers Morgan’s timeline has been filled with rage against people whose gender doesn’t conform to the binary of man and woman. Piers has fought with campaigners on his ITV show and on his own Twitter timeline and even written about it in his column with the MailOnline.

Earlier in 2017, the presenter condemned LGBT charity Stonewall, calling them “Piers-phobic” after a spokesperson blasted him for “bullying” a couple who identified as non-binary on Good Morning Britain.

Josh Rivers, the new editor of Gay Times was suspended and then fired after just 20 days in the job, following the discovery by Buzzfeed, of antisemitic, lesbian hating, body shaming and anti-Asian tweets in his Twitter timeline. The majority of tweets were published between 2010 and 2015.

Rivers was working on a mandate of promoting inclusivity and diversity at the magazine when a number of incendiary comments on his Twitter account between 2010 and 2015. Some of the tweets which have been deleted described Jews as “gross” and some directed hatred towards lesbians, overweight women and men, and Asian and Chinese people. Apologising for his tweets, Rivers wrote: “To every single person who is hurt, offended and disappointed: I’m sorry”.

He has now deleted his profile.

Twitter itself came under fire this year for bi-erasure and for suspending a number of popular gay/ LGBT+ websites. Twitter effectively deleted the #bisexual hashtag from showing photos, videos and news items which used that tag. When users tried to use that hashtag in the search bar, they were met with a “no results” page. It took the platform several days to fix the issue.

British singer, Lily Allen used the word “fags” on Twitter and got a response, trouble was it probably wasn’t the one that she was probably hoping for. Her Tweet, “Fags Hate Trump” did not go down well it’s fair to say. The singer was swiftly admonished by many in the community. Some called the singer ‘homophobic’.

Another Celeb from this year’s I’m A Celeb, Amir Khan, was allegedly found to have Tweets on his timeline which were found to be homophobic. In a tweet said to have been sent in 2011, Khan allegedly wrote, “Nothing against them. Sort it out lad. No wonder pple think u like boys haha”.

In another post from 2010, a tweet which read, “Abuse @saj23x for keeping pictures on his phone, he is defiantly gay after today’s tweet. Asll the guys beware, @saj23x is GAY” was sent from his official account.

Amir has not apologised or commented on the tweets.

Yet another 2017 I’m A Celeb alumni was allegedly found to have casual homophobia found on her Twitter timeline. Vardy never commented on the Twitter and has not apologised for the offensive tweet.

Not Twitter this time, but on Instagram. Hazel E star of the Love & Hip-Hop Hollywood TV show asked her gay fans to forgive her for saying, “burn in hell just like God said in the bible”

Homophobic tweets sent by Big Brother housemate, Tom Barber came back to haunt him after it was revealed that he allegedly used the homophobic slur “faggot” and used “gay” and “lesbian” as pejorative descriptions in tweets sent to friends.

Channel 5, the broadcast of Big Brother refused to remove him from the show, despite previous housemates from other series being removed for racist language on their Twitter accounts.