FILM REVIEW | Guardians of the Galaxy 2 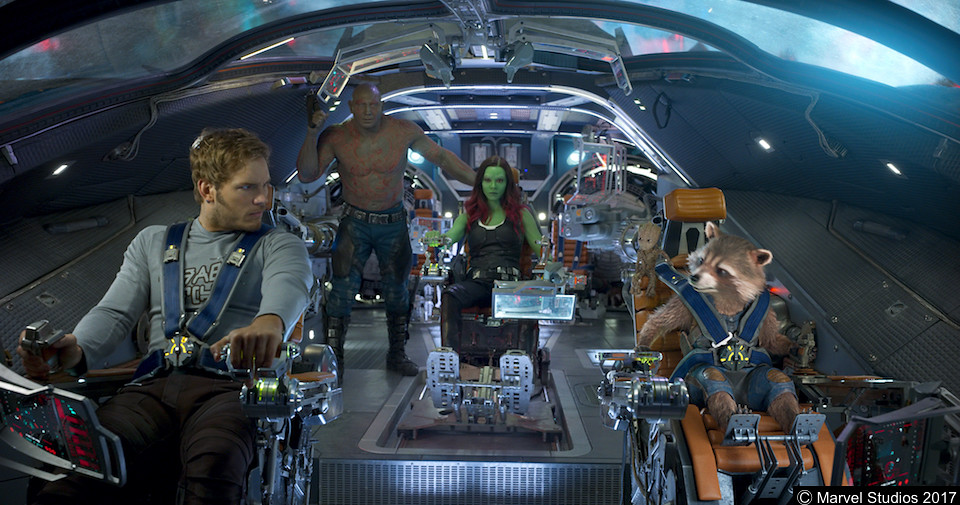 GUARDIANS OF THE GALAXY 2 – The Fab 5 of the Marvel universe are back after the surprise huge success of part 1 – cue big laughs, huge action and a fantastic 70’s cheese pop hit soundtrack.

Nutshell – After saving the universe last time our heroes are now in huge demand as hired troubleshooters across the stars dispatching monsters to the songs of ELO. Groot is now Baby Groot and Rocket the gun-toting racoon is causing havoc left, right and centre. Starlord finds his father, but is everything as it seems? Soon all hell is breaking loose and the universe needs saving all over again. This time with even more comedy in the funniest Superhero film of all time.

Tagline – ‘Anyone Can Save The Galaxy Once’.

THEGAYUK Factor – Don’t be late as right at the start Chris Pratt gets naked in two shower scenes which are wholly unnecessary except to satisfy his massive gay following that he is very aware of. You will greatly enjoy his buff muscular body and at this rate, we expect him to deliver full naked ass shots in next year’s Jurassic Park and we really hope he has to bend over to pick something up.

Key Player – It’s a three-way split between whoever produced the great sing-a-long Awesome Mix Tape 2, James Gunn who directed but even more successfully wrote it and Bradley Cooper whose rodent gets all the very best lines.

Budget – $200 Million which is a whopping sum but after its first week of worldwide release it has made $250 Million and it will make at least three maybe four times that in total – a new money making bandwagon has begun – sequel movies are going nowhere.

Best Bit – 0.47 mins; Rocket Raccoon takes on a whole army of opponents in a forest with a bunch of ingenious traps that will get any cinema crowd whooping and hollering. When Rocket is on the screen this movie soars.

Worst Bit – 1.35 mins; The characters here are great the story isn’t. This really hits home at the three-quarter mark when the big bad’s plan is revealed and you A) don’t understand it B. have no interest in it and C) don’t want it resolved by endless blinding CGI.

Little Secret – They planned a cameo by David Bowie but his death vetoed that, Miley Cyrus, The Hoff and Howard The Duck do make it in. Don’t be late or you will miss Chris Pratt naked and certainly don’t leave early as there are a record-breaking five scenes during the end credits.

Further Viewing – Guardians 1, Avengers 1 & 2, Thor 1 & 2, Fantastic Four movies if you really have to and everything in the Marvel cannon as all these films intertwine and we are heading fast towards Avengers Infinity War which is two films where the Guardians meet The Hulk, Captain America, Iron Man, Spiderman etc – The biggest movie or car crash of all time coming to megaplexes next year.

Any Good – Wow, this is great fun, really really great fun, you will laugh, cry, dance, sing and yelp with excitement – go see it now. After last years endless blockbuster disasters, yes Ghostbusters/Independence Day/Batman V Superman and X-Men we are looking at you with Beauty and the Beast & Fast & Furious 8 and now this we could be in for a run of Billion dollar movies through 2017 via Pirates/Aliens/Star Wars/Apes/Transformers/Minions etc – we predict 2017 will be the biggest money making year in a Century of Hollywood movie making; Exciting times.