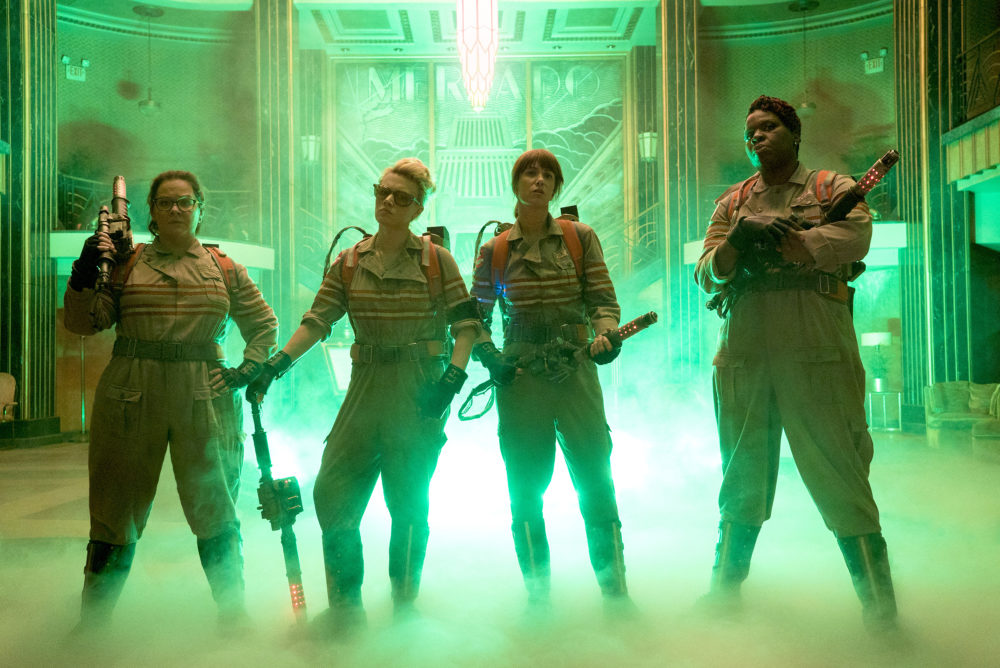 GHOSTBUSTERS – New York is flooded by angry ghosts once again – who ya gonna call ?… The all female reboot that’s who.

Nutshell – Thirty-two years after you first heard that legendary song and saw that logo the female Ghostbusters take over with a mega budget and a host of famous cameos plus all the major players (in different roles) from the original films. From the team that brought you recent megahits like Bridesmaids and Spy, means you are in very safe hands with four former Saturday Night Live girls in the lead roles who know how to get laughs a plenty. It has exactly the same tone as the original two movies and is great fun. Bustin’ makes us feel good.

THE GAY UK FACTOR – If THEGAYUK office was making a Ghostbusters movie we would put Chris Hemsworth in tight T-shirts in as many scenes as possible. We would show several shots of the 6’4″ Aussie muscle hunk with his shirt off and we would close the movie with a three minute private lap dance with the sex god over the credits. Guess what the producers give us exactly all that and more and therefore topping up to our wank bank to the brim.

Key Player – Melissa McCarthy is the current queen of comedy and she leads from the front here in what should be an ensemble piece. She has so many funny lines many of which she ad-libbed. She is on the biggest roll in Hollywood at the moment with twelve straight hits and no misses and it won’t stop here.

Budget – $144 Million, It will make a profit but won’t bust blocks as may have been hoped for it but a sequel will follow as set-up nicely with the post credit twist.

Worst Bit – 21.00 mins; The big bad is neither very big or very bad and the film really picks up when in Scooby Doo type fashion the evil spirit starts to take over various main cast members and upping both the fun and jeopardy.

Little Secret – When the movie was first assembled it was a butt clenching 4 hours and 15 mins long so some severe editing was required. As of today its trailer on YouTube was the most hated of all time as fans did not like the idea of the original guys being replaced by gals.

Movie Mistake – Lots. After the first ghostly encounter when Erin is covered in gloop she hugs Abby who in the next shot has no gunk on her whatsoever, the ghostbusters vehicle Ecto 1 appears in their garage HQ before they have even acquired it in the story and the evil spirit can control a whole army of men and makes them dance but stupidly appear to have no power over the four ghostbusting girls who are obviously the real threat.

Further Viewing – Ghostbusters 1 & 2, Men In Black 1 & 2, Bridesmaids, The Boss, Heat, Sister Act or anything with Sandra Bullock or Bette Midler in.

Any Good – Perfectly adequate no more and no less. We have a suspicion that now all the homages to the original is out of the way that the sequel will be truly great. A weird kind of experience where after a neat opening scene, the movie then dips substantially and then gets gradually builds and gets better and better throughout as it progresses to a very lively climax . Giving you a marathon feel rather than a sprint.