This new pride flag aims to be the most inclusive ever 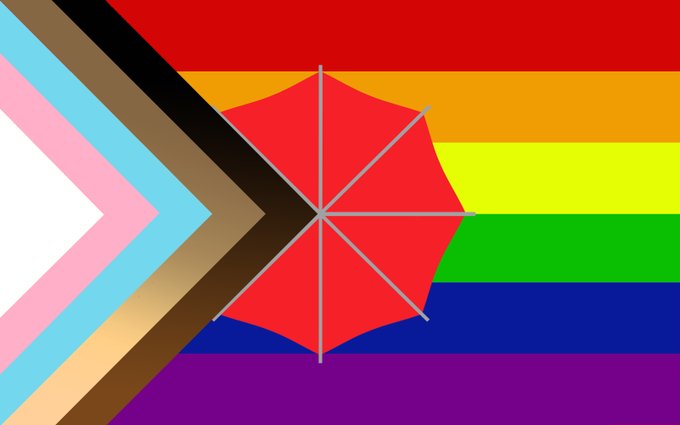 A brand new Pride Flag has been created with the aim of being even more inclusive than previous versions.

The flag, which was created by sex-worker rights and PrEP advocate Jason Domino includes a red umbrella symbol which has been used by sex-workers across the globe as a way to remember sex-workers who were victims of abuse and violence.

In the new design, the red umbrella has been superimposed on top of what is known as the “progressive pride flag” which incorporates the trans flag’s blue, white and pink stripes and a graduated black and brown stripe to represent LGBT+ people of colour.

Domino says that he collaborated on the flag along with HIV activist Shamal Waraich to “to be more accurate for skin tones of more POC/BAME.”

The original eight-stripe Pride flag was created in 1978 by artist Gilbert Baker who said that he created the flag as there was “no other international symbol for [the LGBT+ community] than the pink triangle which the Nazis used to identify homosexuals in concentration camps,

What is the history of the Pride Flag?

The original flag was an 8 stripe flag, but over time two colours were removed, the Pink and Cyan, to become the 6-flag stripe that is best-known across the globe to represent the LGBT+ community.

In 2017 activists in the US city of Philadelphia introduced a “more pride” flag which incorporated a black and brown stripe.

On Twitter, the new flag has met with positive reaction with people thanking Jason for including sex-workers.