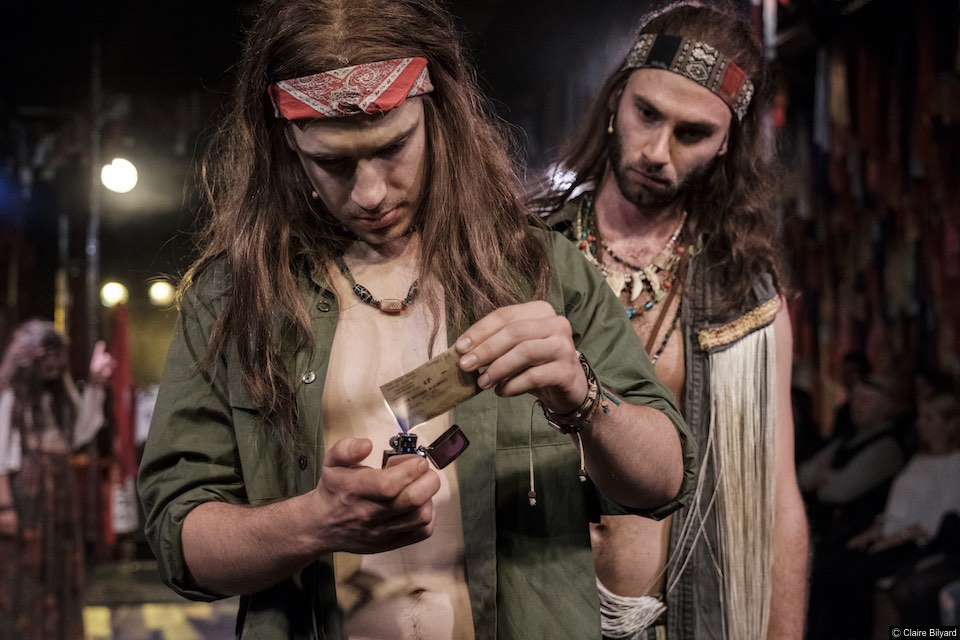 Hair, the original naked musical, is celebrating its 50th anniversary in a new production at The Vaults in London. Is the message that it sent in the hippie lovin’ 60s still relevant today? You betcha.

When Hair was originally produced off-Broadway in New York City in 1967, its message of anti-establishment and free love, anti-war, and its display of full frontal nudity shocked audiences back then, leading to more publicity and packed houses. Now that we have Donald Trump in the most powerful office in the world, and with the UK ready to break off from the EU, and not to mention the political and socioeconomic changes happening around the world, Hair’s message is perhaps more relevant than ever before. But is it actually a good show?

In the tiny, cosy and very hot theatre that is The Vaults under Waterloo station, 14 actors playing hippies sing and dance and sway their young lithe bodies all over the dirt floor that is the stage, and for one brief moment at the very end of the first half, they all get naked. And before and after in the second half, we are sung and spoken to by these youngsters as they tell their anti-war tales and burn their draft cards and the unlucky ones who are sent to fight in a war but come back with limbs, and emotions, gone.

Yet all the favourite songs are here, songs that include ‘Aquarius,’ ‘Good Morning Starshine,’ and ‘Let the Sunshine In,’ songs that make this show famous, more so than the script. So if you’ve never actually seen Hair performed, go and see it now as this might be your last opportunity, but don’t expect to be wowed and awed in this production, though it might help if you take some stimulants to get you through the evening as this show is as mellow as can be.

Hair plays at the Vaults Theatre, London until 3rd December 2017