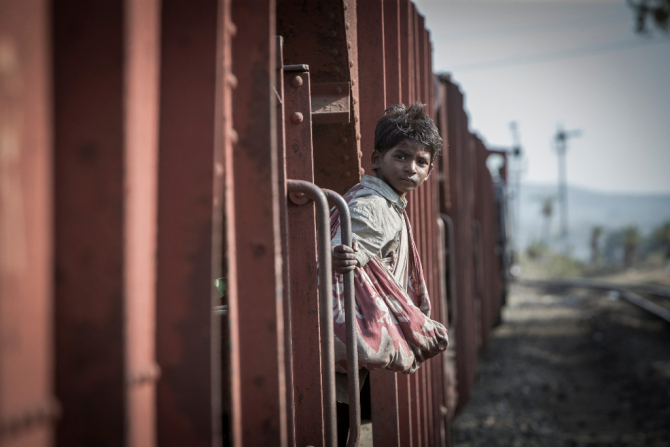 A young man attempts to trace his roots in the moving and excellent film Lion.

Dev Patel is Saroo Brierley. He’s adopted by Australian couple John and Sue Brierley (David Wenham and Nicole Kidman) and vaguely aware that he had a life in India when he was a very young boy – it’s all just a very distant memory. Now in his 20s, and in college, him and his friends (including girlfriend Lucy – Rooney Mara) have a discussion about their origins, and Saroo tells his classmates that he was adopted and born in India, and probably still has family there, but he hasn’t been there since when he was a little boy. This puts a spark in his head to try to find out where in India he comes from.

There are still a few very vague images in his mind he can recall from his childhood, and especially from when he got separated from his brother (a water tower, a train station). Saroo sets about determined to discover where he’s from and starts to map out India until he can pinpoint an area where he believes he came from.

But this is the not the entire movie. The first half of the film has Saroo as a little boy (played amazingly by Sunny Pawar), who along with his brother Guddu (Abshishek Bharate), are lost, so Guddu goes in search of help, and leaves Saroo on a train platform. Saroo falls asleep, then wakes up a bit disoriented, and calls out for Guddu, but he’s nowhere to be found. Saroo walks around the train station calling out for Guddu, but then ends up falling asleep on a train that accidentally takes him 1,000 miles away to Calcutta, taking him far away from home, far away from Guddu, and far away from his life.

Lion, as mentioned above, is a film with two halves; Saroo as a child and Saroo as a young man. And the first half of the film is simply amazing. It’s all down to Pawar, who as the young Saroo, after losing his big brother Guddu, is lost and confused and scared and aimlessly wandering around looking for food and trying to survive. He knows no one, is totally lost and alone, and is very very frightened. Eventually he is taken in by an orphanage which is where the Brierley’s adopt him and take him to their home in Australia, which is when the second half of the film begins.

Pawar deserves a Supporting Actor nomination or a special child Oscar for his sensitive and heartbreaking portrayal of Saroo (Jacob Tremblay in last year’s award-winning Room didn’t receive either but deserved one). Pawar is excellent. Patel is very good as the grown-up Saroo who is determined to find out where he comes from. Patel here proves that he was not just a one-hit wonder in the Oscar-winning Slumdog Millionaire. Kidman is fine as his adoptive mother, but it’s hard not to look at her on screen and think you’re seeing Nicole Kidman and not the character she is playing. The screenplay, adapted from the book A Long Way Home, written by Saroo Brierley, and adapted by Luke Davies, tells the story in a way that will tug at your hearts more than any other film this year. Director Garth Davis (who has done mostly television shows) directs with such a fine balance of drama and emotion that it’s a perfect film which tells a true story that truly deserved to be told. It’s the best film of the year.