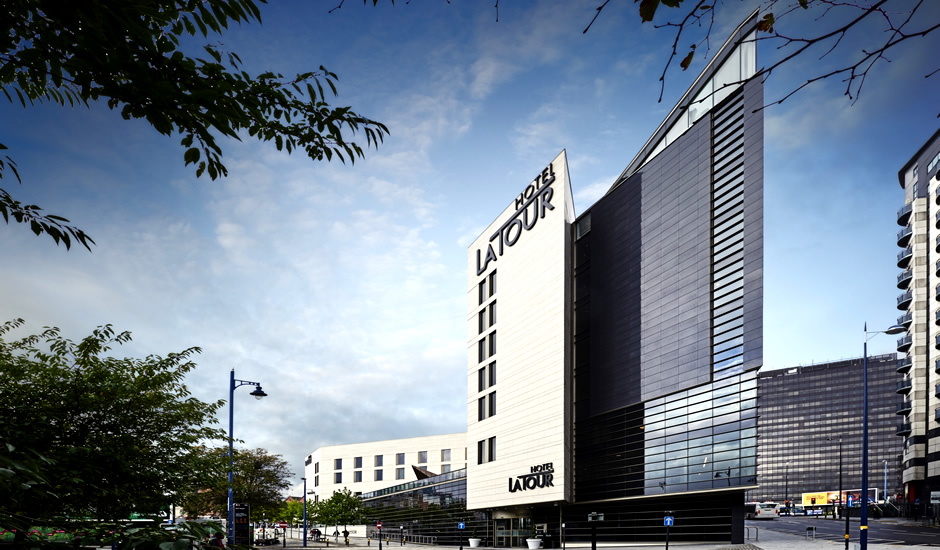 If you’re planning a city break in Birmingham, then you should check out the modern design of the Hotel La Tour. ★★★★

The large open reception area is clean, bright and very welcoming at the desk. The Hotel La Tour opened its doors in 2012 and offers comfortable sized rooms, including the standard City Room that we stayed in, right in the city centre. Like any good city hotel everything is there to make your stay pleasurable without being too fussy or over cosy. After all you’re more likely there to explore the city than sit in a room watching TV. However, A good firm king sized bed, modern bathroom fittings and phone system that controls the lights, you’ll be hard to find a nicer room in the city of Birmingham for the price. Other positives are the free pool tables in the reception area, great for when you stager back from town thinking you’re the next Karl Boyes… Ok, I had to look that one up, I didn’t know any World Eight-Ball Champions off the top of my head. The breakfast buffet is served in the Chophouse dining area, which I discuss more below, and similar to the rooms you have everything you need from a good buffet, cereals, fresh fruit, cooked items, all in a comfortable setting, without the fuss.

On the negative, If there’s one thing I can’t stand it’s celebrity chefs plastering their name on everything, such as the Jamie Oliver’s branded slate cheese board. It’s a piece of slate, likely mined from the Welsh hills, why on earth does it need his name engraved onto it? Well, sadly, it seems the celebrity chef name, or face on this occasion, has also been firmly rooted into this hotel’s surroundings. Housing the first Marco Pierre White’s Chophouse, which serves up a selection of meat and fish dishes inspired by 18th century London chophouses, is a great addition to the hotel. However, you get to dine with pictures of chef Marco Pierre White plastered everywhere, on walls around the dining room, in the reception area, on TV screens in the lifts, and even in the bedrooms! I left feeling like I’d spent a weekend with the guy. The disappointment here being a little like my cheese board, Jamie won’t be popping round to serve from it, nor will Mr White be in the kitchen at his Chophouse to dish up your food. This is only a minor irritation in an otherwise fantastic hotel with great location.

The UK’s bitchiest agony aunt. Send her your woes if you dare.