Is This Homophobic? Butcher Advertises “No Drama Queens” Job 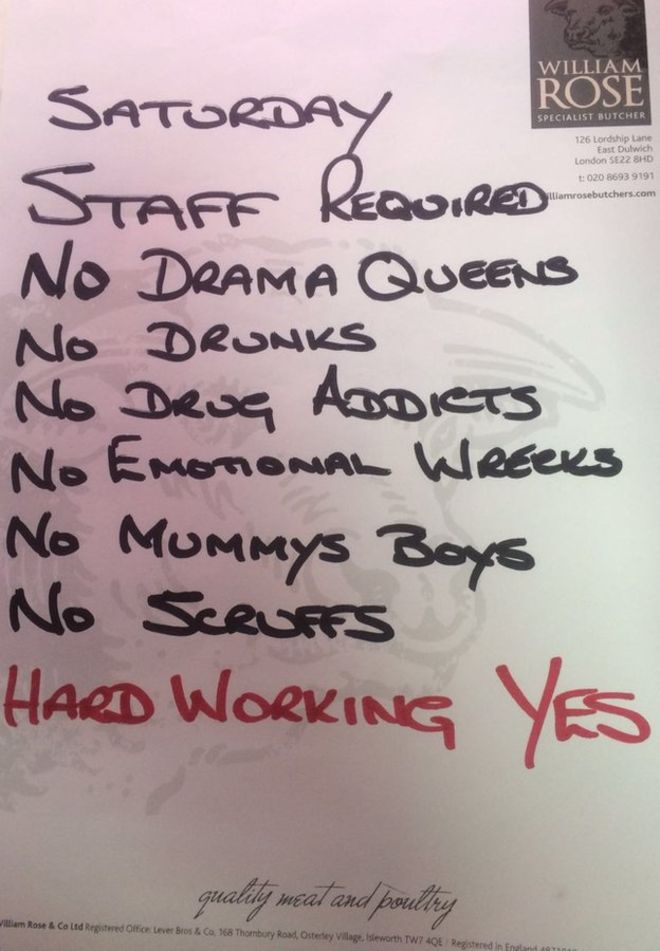 Is This Homophobic? Butcher Advertises “No Drama Queens” Job

A shop owner in London has been criticised for the language used in a description advert for a job in his shop. A butcher in London has been criticised after an advertisement for a job appeared in his window, where he asked that ‘no drama queens’ or ‘Mummy’s boys’ apply.

William Rose, 60, said that he had advertised the job for Saturday staff  in his East Dulwich butchers for one month – but had received little interest in the position, but when he put the hand written poster in the window, he received 18 applications in one day.

Along with no ‘Mummy’s boys’ or ‘Drama queens’ Mr Rose also doesn’t want ’emotional wrecks’ or ‘scruffs’ to apply for the shop position.

Speaking on BBC London Mr Rose defended the advert by saying that previous potential employees had smelt of drink and had struggled to talk to customers, but that he had managed to find a suitable applicant – “a very smart young lad with a little family to keep”.

According to Mr Rose, the advert was “just for fun” but an employment lawyer had told him that, “‘You can’t put mummy’s boys you have to put mummy’s persons’.

The term drama queen is considered by some in the gay community as a pejorative term and highly homophobic.

So do you think it’s homophobic or sexiest?