★★★★★ Alright Bitches | Winter blues getting you down on your knees, feeling the cold-finger from old Jack Frost or just in need of some sun, sand and seamen? 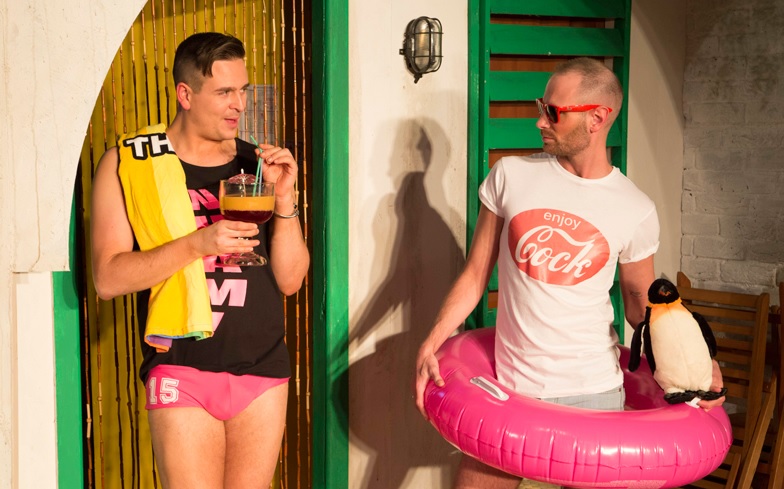 Look no further. No need to stock up on Piz Buin, dig out ya passport and pack ya fave twelve pairs of AussieBums, just head south to the Costa del Vauxhall and lay ya beach towel in the stalls of the Above The Stag theatre.

Writer Martin Blackburn can recite the words to Wicked, Les Miserables and The Last Night Gimp Fight at the drop of a Philip Treacy multi-buntal-ribboned scarlet bonnet. You’ll be able to tell that as well as being a theatre buff, Blackburn has spent many a holibobs in Las Palmas Gran Canaria soaking up more then just the rays.

You’ll be looked after and led through the performance by holiday rep Thabian’s (Jack Bowman) infectious tones – can’t imagine where Martin got his inspiration?

Apart from being more packed with double entendres and diaphragm-clenching witticisms than a peacocks-posing pouch mincing along Playa del Ingles, Blackburn touches on real issues such as being ashamed of being gay, how the virtual scene has impacted the organic get-shit-faced-and-pick-up one, and do different bank balances, ages and interests really attract?

THEGAYUK asked Blackburn why he wrote this play. Martin said “I go to the theatre all the time but never really laugh”. Not much chance of your respiratory system leaving Alright Bitches without a workout.