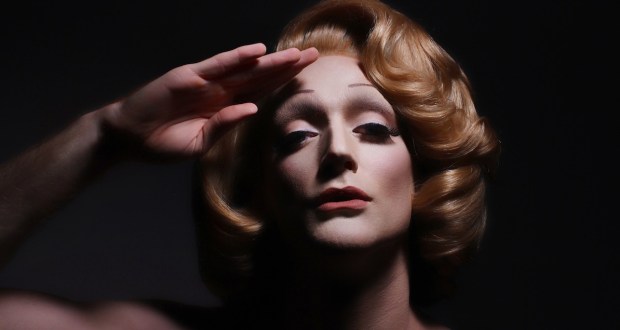 Described as a one (wo)man show, Peter Groom’s take on legendary teutonic beauty Marlene Dietrich is literally breathtaking at points. There’s an uncanny likeness between him and the screen goddess with his cat-like cheekbones and arched brows. He’s clearly spent a vast amount of time studying her mannerisms and speech too as he captures every wink, every drag on a cigarette and each sultry gaze. There’s something uncanny about his appearance that makes you feel that you’re anywhere but in the Vaults which is essentially a dank series of tunnels under Waterloo Station. The bare brick and smoky interior is entirely appropriate with it’s underground club feel.

Groom has written a witty show with a touch of pathos based around Dietrich’s wartime experiences. It was a stark choice for her as she made the decision to leave behind her beloved mother along with her mother country and flee to America. Taking on the role of ‘Captain Dietrich’ she entertained and supported the troupes and saw first hand some of the horrors of war.

The show is based around a saucy cabaret performance with Groom slinking on in a spectacular gown and rasping out some of Dietrich’s songs. Heckling by a reporter makes her pause and reluctantly answer some probing questions. Not only is Groom a fabulous mimic but he’s also a deft and skilled writer as the script lurches between camp comedy and deep sadness. This is an absolute tour de force. If you can catch this tonight or tomorrow then get down to the Vaults Festival. If not then keep your eyes peeled as this is a show that’s sure that make a return.