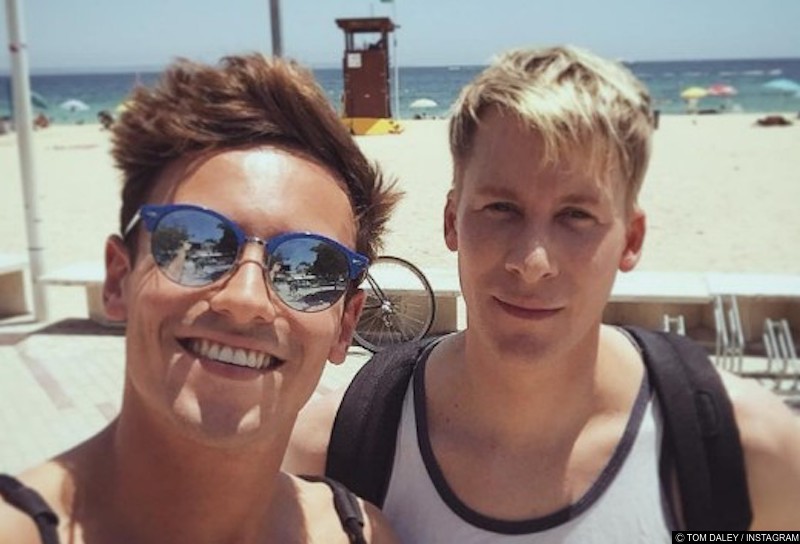 As for age gaps in relationships, Tom Daley and Dustin Lance Black’s is quite a big one…

But by no means, is it the biggest in the gay celeb community… one of the biggest was the relationship between Liberace and Scott Thorson, which was 48 years. Stephen Sondheim and his partner also have 48 years between them.

There’s around a 20-year age difference between Tom Daley and Dustin Lance Black and speaking recently to a newspaper, Tom revealed that the couple, who got married earlier this year, never thinks about the age gap and he feels like the oldest in the relationship sometimes.

Speaking to the Belfast Telegraph, Tom Daley said, “I don’t really think about age and we never notice the age gap. Funnily enough, I feel older in terms of maturity.

Opening up about where his maturity stemmed from, Tom revealed that he felt he had to grow up quickly because of his profession and all the travel he had to do as a child going to and from competitions and events.

“I had to grow up quickly because I was only 10 when I first travelled to Australia without my parents to compete.

“In a way, I did miss out on some aspects of childhood because I had to learn to do things for myself and stand on my own two feet quite quickly, but, on the other hand, I was so lucky to be able to travel and have so many experiences.”

Tom and Dustin was “Love at first sight”

Tom and Dustin have been together since before Tom Daley came out in December 2013.  They announced their engagement in 2015 and got married earlier this year.
Before it was revealed that Tom was in a relationship with Dustin, he described meeting his boyfriend as “love at first sight” during an interview with Jonathan Ross in 2013.