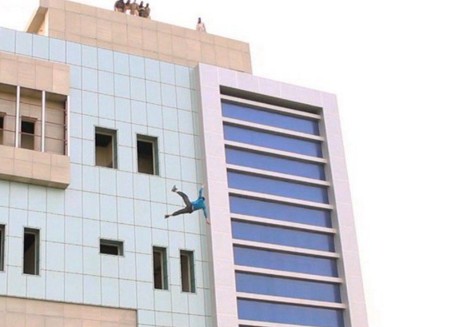 The Islamic State have released pictures in which a man is thrown off a roof after being found engaging in gay sex.

A man has been executed in Iraq after he was found guilty of engaging in gay sex. A crowd of onlookers watched as a group of around six ISIS fighters threw the man off a multi-storey building site in Iraq. The location of the building has not been confirmed, although it is thought it could be in Mosel in the north of the country.

The man, who was wearing a highly visible turquoise jumper and dark trousers was watched by a group of onlookers – who stood at the foot of the building. The crowd included at least ten children.

Unusually for this type of execution, the man was not bound at the feet and hands.

In the series of pictures released by ISIS, and published by TerrorMonitor.org, one includes a man dressed in black speaking into a microphone who it is believed was reading out the charges facing the man.

Throwing victims off tall buildings is the most common way in which ISIS execute men they find guilty of homosexuality of those who engage in homosexual acts.

ALSO READ: Where in the world is being gay a crime for which you can get the death penalty?

ISIS have taken over large portions of Syria and Iraq and it is believe that around 10 million people live under its control.

Although the death penalty is not law in either Syria or Iraq in Islamic State controlled areas, in which they use Sharia Law as their legal system, gay men face capital punishment.