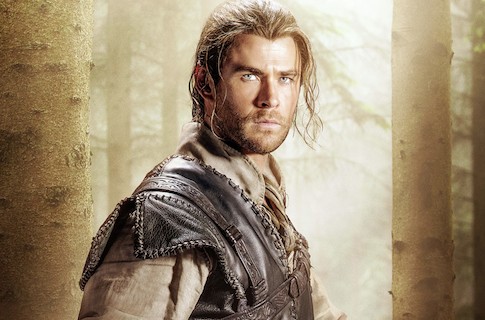 Two Hours of Chris Hemsworth wielding his very big chopper and chasing some very big men with it.

Nutshell / Hollywood pitch – Let’s make a prequel/sequel to the successful 2014 film where Snow White means Game Of Thrones. All other sequels go darker and moodier but here we go lighter and up the comedy and the action beats too boot. Evil Queen has even more evil Sister who has watched too much Frozen as like Elsa she can control snow and ice but here without bursting into ‘Let It Go’ at regular intervals. Chris Hemsworth has to save the day in the land where love has been banned yet he can’t help feeling the need to breed so he sets off on adventures to avenge a death…  It has a decent midway twist and Charlize Theron hamming it up superbly in two important sections in the secondary villain roll and you won’t be able to take your eyes off her when she is on screen.

Certificate – 12A so the fights are very user friendly.

THE GAY UK FACTOR – A full length feature in the company of the ultimate muscled man of the countryside Chris Hemsworth The Huntsman himself who can hunt us anytime – You can virtually smell his pits and testosterone through the screen this is one serious big Alpha male guy, unfortunately with one of the worst haircuts in movie history this time out. On the upside he does briefly decide to get into the bath naked which stills have already flooded across the internet on every gay blog and wank site.

Cast – The Aussie Hunk Thor Chris Hemsworth and the South African beauty and Oscar winner for Monster Charlize Theron. Another Oscar worrying actress from The Help and Zero Dark Thirty Jessica Chastain plays the love interest and Emily Blunt (The Devil Wears Prada) round out the very heavy girlie cast which may be the reason for it’s average Box Office success. The supporting cast is Nick Frost (Shaun Of The Dead), Sheridan Smith from the superb TV Drama Cilla and Rob Brydon from BBC’s Would I Lie To You?, Gavin and Stacey and even Lock Stock and Two Smoking Barrels.

Key Player – Mirror mirror on the wall who is… you know the drill. Charlize Theron does not have a huge screen time here but like the first film she dominates and steals it from everyone else and she seems to be having such fun maybe she should do a lot more villainess roles. We could all do with her evil mirror if it makes us this attractive.

Budget – A not cheap $115 million. It hasn’t opened in the States yet but only garnering $44 million Internationally it maybe the first flop of the Summer blockbuster season. The previous film in the series made $396 million let’s put it simply, this one won’t.

Best Bit – 1.02 mins; The central fight scene in the woods and over a rope bridge with some very nasty creatures is the high point here. It is tense, well directed and the monsters are very good indeed and pretty unstoppable.

Worst Bit – 1.18 mins; The big spectacular action sequence where Hemsworth has to climb a mountain and assail the villains castle roof tops should be a thrilling stunt fest with hands over your eyes moments and fingernails dug into your armrest’s but it just isn’t – Diehard With A Vengeance this is not.

Little Secret – Charlize Theron was reportedly offered a lot less money to reprise her role in this film than Chris Hemsworth and she refused to sign on. Later the producers agreed that she was a big star and an International draw in her own right and raised her money up to $10 million for the movie exactly the same as what Chris got.

Movie Mistake – Normally we would point out the bloopers and continuation errors but there is something bigger here. He is great to look at but Hemsworth’s accent here hits like a badly cast BBC 70’s comedy. When they move North the characters go all Scottish and when they go West they go Welsh – no problem for Rob Brydon but his three side kicks come over more like Bonnie Tyler, Charlotte Church and Gareth Thomas with bad head colds.

Awards – Charlize and Jessica are massive award magnets but Chris is pure action man who will never get any gongs. The last film won nothing and nor will this except some Golden Rasberries for those accents.

Further Viewing – Game Of Thrones, Snow White & The Huntsman, Maleficent, Alice In Wonderland and all Disney’s revamped darker versions of former cartoon fairytales, Thor, The Lord Of The Rings and Hobbit trilogies and a million fantasy sword and dragon movies.

Any Good – Well you will certainly get your monies worth as a lot of that hundred mill is up there on the screen. It’s a decent Friday night out which won’t change your life. We just wonder if more Theron and some other male leads would have helped somewhat.

Rating – 76/100 (76th out of the last 100 films reviewed with 1 being Gay UK filmatic ejaculatery heaven and 100 being as much fun as a long haul International flight next to a screaming baby whilst you are trying to concentrate on Thor The dark world.