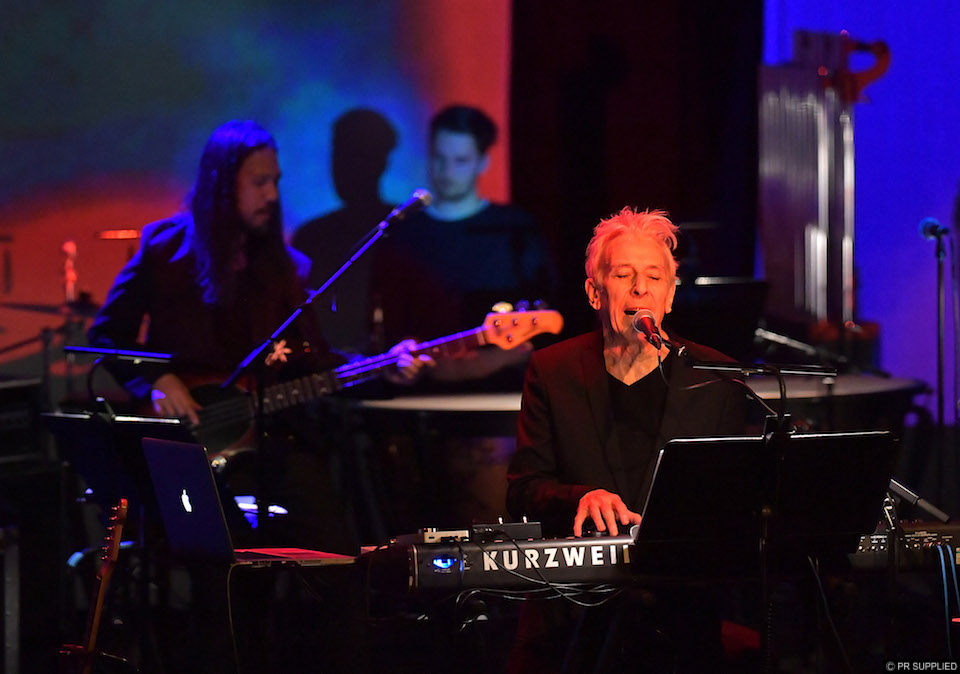 Should gay men -especially pop music fans -adore non-gay artists? Oh Hell, yeah! Take John Cale, the legendary other half of the totally transgressive, sicker-than-sick shock-jocks of the 1960s, the Velvet Underground. Sure, okay, they were spearheaded by uber-gay, ex-street hustler Lou Reed, but if not gay himself, Cale was most certainly GBA – Gay By Association! How could he not be? The Velvets’ first two albums literally drip with metaphorical semen from the grooves, and – once you slap those vinyl platters on antediluvian turntables – you’ll be conceptually violated by blistering. sonic portraits of smack dependency, botched, D.I.Y sex-change ops, brutal – if unintentional- murder, and mass, totally fucked-up drag queen orgies!

Holy Jesus Christ on a hot-wired crucifix – what’s not to like? But, if less flamboyant than Lou, Cale brought a hugely disturbing, forensic stripping of human foibles worthy of the Marquis de Sade to the Velvets’ awesomely experimental table. And please, remember – unlike today, in a social media climate which smugly prides itself on clunky expressions of gender fluidity, in the mid-to-late 60s, nobody gave the slightest f*ck what clunky acronym you chose to publicly parade under! Simply, you’d just screw whoever – or whatever- turned you on, with no big deal, a far less heavy-handed sexual etiquette than now!

But why, pray tell, am I resuscitating tales of John Cale for readers who, quite understandably, are pumpingly content with semi-sexualised, fanboy fantasies centred on Rihanna and current trans poster saint Ezra Furman, who – FYI – has just released his rather staggeringly good latest opus, Transangelic Exodus? Well, duh, because knowledge is power, an ability to counter, decisively attack and enlighten dumb, bigoted assaults on gay musical excellence, so it’s vital to recognise and be aware of a major, gay-friendly musician at least equal to Bowie!

But, let’s not forget the one utterly magical, essential link that chained the fifth, fury and shockingly transcendent perversions of Lou Reed and John Cale together; Andy Warhol. Possibly the ultimate gay icon, Warhol was a furious, non-stop workaholic. Perpetually partying, even more fiercely than the equally manic-for-inspiration Alexander McQueen, Warhol had one, pathological pet hate – laziness. Famously, he called Lou Reed – the amphetamine cranked, 24-7 sensation junkie – ‘a rat’, the most poisonous put-down poor tongue-tied and socially timid Andy could manage. Ah, but beneath the badly-fitting, signature, snow-white nylon wigs, Andy’s inner bitch was barreling along with frightening, freight-train venom. Okay, granted, it didn’t surface in print until years later – in Andy’s smash, publishing sensation, ‘The Diaries’ – but especially then, as inescapable fact, Andy’s bile crushed poor Lou.

Tough. The lazy bum should’ve – as Andy hissed – written more songs. Warhol, after all, was publicly billed as the producer of the Velvet Underground’s still-astounding first album, with Lou as front-man, so why shouldn’t Andy insist on humanly impossible excellence?

Lou, after all, was risking nothing – back in ‘67, he was just a snotty queen and junkie hustler, but Andy was America’s pop-art God supreme. Sure, Lou, later – with methamphetamine poked in every possible orifice – excelled himself with stacks of respected vinyl, but arguably, it’s John Cale – the John Lennon to Lou’s Paul McCartney – who blew the roof off Andy’s inhuman expectations.

So, back to John, who briefly flamed down this March in London town, still crackling with all the brutal, insolent genius of a singed Satan gunning to kill – stupidity, that is. So he should – John’s back, hell, even his current catalogue – backs down to nobody in inventive brilliance, not even Bowie. And if Bowie – for the better part of a decade – retreated into past mystique, John, non-stop, gleefully trashes his own legacy, and re-arranges it as something far more rich and deranged.

It shows. Not content with producing stellar, landmark albums by Patti Smith, Iggy and the Stooges, Brian Eno and junkie diva Nico, he’s still creatively frenzied. In London, that’s signposted – quite obviously, tonight – in the ripped shrapnel dissonance of his dress-sense, a classical musician’s frock-coat and street-scum sneakers.

Mercifully – unlike Lou – John exhibits no desire to perma-bond himself to past glories, in Lou’s case as the sullen, presumed Poet Laureate of Perversion. Rather, he’s refined the fierce, forensic intellect exhibited on his Paris 1919 album, and the razor-cut, dandy’s discrimination iconically frozen on that record sleeve.

And please, gleefully flush any notions of crawling, sycophantic X-Factor stage presentation straight down the shit-caked sewers they so perfectly deserve. Unlike Beyonce, Gaga or the flocking legions of sub-prime lingerie models pathetically doubling as auto-tuned divas, John – rightly – doesn’t give a fuck about sartorially simpering to the audience. Jesus, he even manages-with superbly blasé aplomb!- to make the clunky cast on his right foot instantly achieve the aura as a must-have, cool-as-fuck religious relic from the body of a still stubbornly living, genuine rock Messiah!

Better yet-with a casual, Roman emperor arrogance female foghorn Adele would die for -John chooses to leaves his full, onstage orchestra largely redundant, as if they might, just perhaps, add a possible classical flourish at John’s passing whim. Oh, it’s such moments that make one ache that John’s not gay – that ruthless, dictatorial streak would go down (ha, ha) stormingly in S&M sex!

Still, even for me – a devoted fan – John’s chosen, blinding, banshee holocaust tonight makes almost every song unrecognisable. Yes, maybe, there are ringing, guitar chords and a full orchestral heft identifying Cale staples ‘Dying On The Vine’, and ‘Half Past France’ in the eye of the sonic storm, but so what? Complete irreverence for his work is John’s fabulously unique, to-die-for appeal, and tonight, he’s stunningly massacred Lou Reed’s iconic ‘Waiting For The Man’, an acknowledged masterpiece, making it stronger still. So what raging idiot would want – or even need? – some knackered burn-out screeching excruciating parodies of their finest, long-gone moments? Frankly, that’s best left to failing show-tunes divas, superglued like rotting corpses to the screamingly obvious!

But John – like Brian Eno and Bjork – is continually scaling unexplored, creative heights. Who else would dare imagine deploying an orchestra of flying drones at the Barbican, or blatantly re-working the Velvet Underground’s iconic, pansexual legacy, although bureaucracy crippled the drones idea? Still, no wonder John’s smiling as he leaves, as ragged chants of ‘Happy Birthday’ intermittently pepper his set. Always totally non-precious, unlike Mariah Carey clones who dictate backstage comforts with the ferocity of a third-world dictator, John even treats his 76th birthday as just another gig. An undoubted, trans-genre genius, he may have released ‘Music For A New Society’ way back in 1982, but tonight, his audience – still basking in his scorching afterglow – have almost caught up with him!