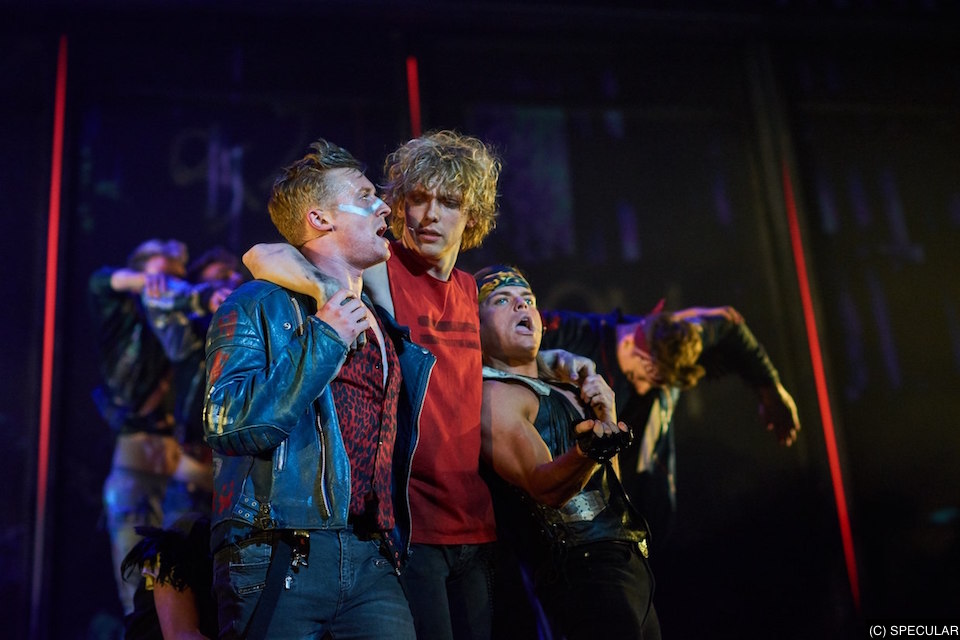 Bat Out of Hell returns – and it’s just as rocked up and fantastic as it was when it played in London its first time around.

Bat Out of Hell had a sold out run at the London Coliseum last year, and it was practically begging to open again – and it has – this time in a bigger venue (Dominion Theatre). It’s the same story – a musical set to Meat Loaf’s mega-selling 1977 album of the same name. While some of the actors have not returned from it’s original run, it’s still a rocktastic, fun and mega exciting ride.

Raven (Christina Bennington – returning from the original show) is literally locked up in a mega mansion in the sky by her parents Falco (Rob Fowler) and Sloane (Sharon Sexton). Raven is a lonely girl – she’s not allowed outside at all – but she really wants to experience the outside world, to ride the subway, to meet a boy. In the outside world Strat (Andrew Polec) leads a gang of nomads and hangers on, and he’s always dreamt of catching the girl – particularly Raven, but she’s not available. So all sorts of musical mayhem takes place including Strat trying to kidnap Raven so that him and her can be together. Meanwhile, one of the gang members (a fabulous Danielle Steers – returning) is slowly falling in love with another gang member, while she’s actually a maid in the Falco household. She knows their secrets, and lies.

This is the story, in a nutshell, but the way it’s told is spectacular. Motorcycles, explosions, video projection, skimpy costumes, a convertible on stage that was formerly a dining room table, and said convertible plunging off the stage into the orchestra pit – it’s all musical mayhem – from a rock classic album, and it is just as good on stage as it is on the album and when it played at the Coliseum. The cast dance and prance on stage, and with most of the songs dealing with love, Bat Out of Hell is a love story set to rock music. It’s loud, it’s crazy, it’s superb!

BAT OUT OF HELL is currently booking until 27 October 2018.