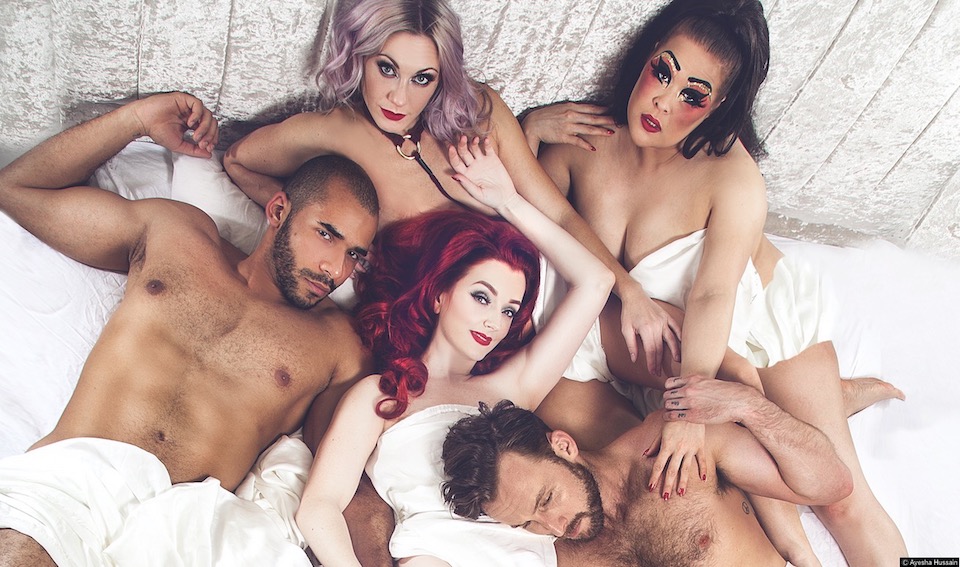 London’s most famous burlesque entertainer – Miss Polly Rae – is hosting a new show at London’s Underbelly Festival on the Southbank. It’s Between the Sheets, and between you and me it’s fabulous!

Polly Rae, along with a cavalcade of other naughty acts, perform a variety of skits while scantily clad in a show that’s fun, and dare we say it, titillating. There’s so much on offer in the show for both men and women as Rae’s performers delight the late night audiences with the ability to do a variety of stunts while simultaneously taking their clothes off.

Come and watch the amazing duo of Duo Visage (Beau Sargent and Sam Smith) combine their spectacular artistry, along with their perfectly lithe bodies, as they do spectacular stunts on the stage in a venue where every seat in the house is good. Then there is Tom Cunningham and Myles Brown, two very good-looking men who take off all of their clothes in one very cute skit while in another scene they most memorably perform a romantic and sensual dance with each other that’s both erotic and emotional and very memorable. We are then treated to the very funny Lilly Snatchdragon who provides comic relief in between the flesh-baring performers. But it’s Kitty Kitty Bang Bang who impresses us the most with her fire eating skills along with her splashing around in a very large cocktail glass semi-filled with water. Did I also mention that she’s scantily clad while doing this? And the gorgeous Beau Rocks rounds out the cast of Between the Sheets, and rounds out just simply describes her and her amazing body and personality.

Playing for a limited time only, Between the Sheets will literally thrill you out of your seat with a spectacular show which takes place in one of London’s best venues. Kudos to Miss Polly Rae for bringing this sort of burlesque show back to London in a visually stunning and hilarious romp. It’s a night out that you will truly not forget.

There are three more shows left of Between the Sheets – all on Fridays: August 25th, September 8th, and September 29th.