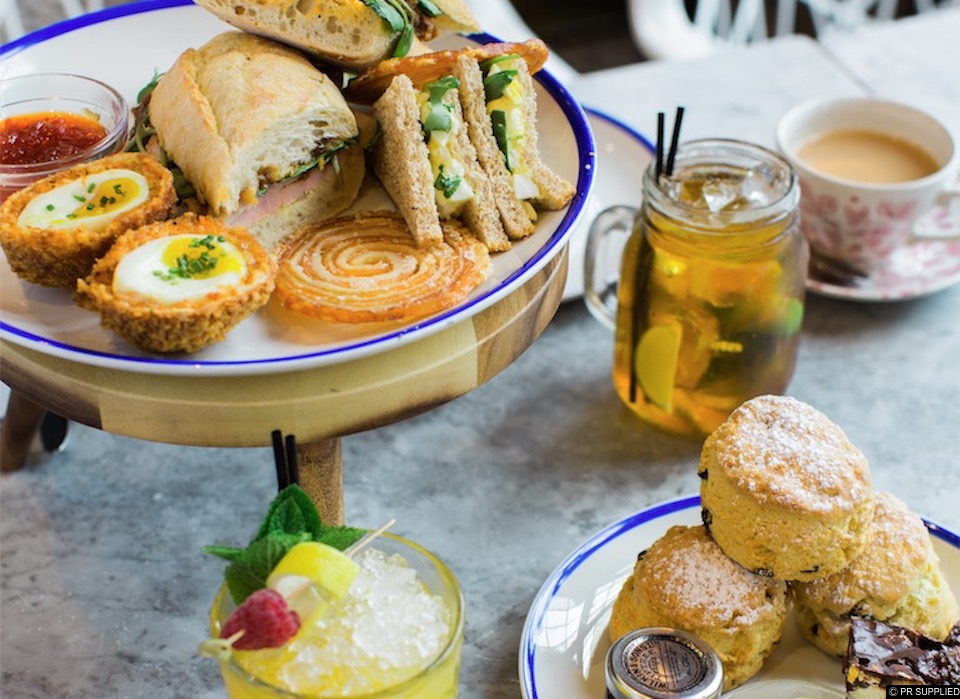 Afternoon Tea is a delightful, British experience which we do not often do. The fresh sandwiches, the warm scones, the ever-flowing tea and the high-end service is something of a treat nowadays. The Gentleman’s Afternoon Tea at Lost and Found takes all you know about tea and cranks it up a notch – and all for just £18.95 per person.

To start off our afternoon marathon, we were greeted with a glass of prosecco each with a raspberry, and Josh provided us a warm and friendly service throughout. The menu for the Gentleman’s Afternoon Tea consists of meaty, bulky and monster sandwiches which were packed with flavour and you could taste the freshness with every bite. Crispy chicken and chorizo on a ginormous baguette halved was spectacular – fresh rocket and well-cooked chicken with just the right amount of chorizo that let the southern style chicken take centre stage. The glazed ham and homemade chutney baguette was very rich on the palate and the sweetness of the chutney really complemented the meat with an added crunch from the lettuce. The egg, mustard and cress sandwich was a really nice light and fluffy mix to the board. My favourite thing that went in my mouth, though, was the scotch eggs – what a highlight! The egg was cooked perfectly and freshly which had the yolk running and put your knife through, with delicious batter and pork paste full of flavour and the combination together sent fireworks. The feta cheese and caramelised onion pastry was another delicate yet fierce competitor for the palate. The pork scratching on chilli jam was okay, I found the scratching too hard to chew and it was just one on each ramekin with loads of chilli sauce underneath – not sure how I feel about this one. The scones were average, did not really stand out as a feature, but popcorn Tiffin was superb. The teapot was very big which meant we probably got about 5 cups each which was enough to go with until the food-athon was over.

You can opt for any of the Afternoon Teas and attach a Tipple, where you select from one of the three cocktails to spice up the experience for an extra £5. It is definitely worth doing that.

In the end, it was too much and we had to admit defeat – doggy-bagging half of the crispy chicken and chorizo baguette and two Tiffin cakes. I must say, I had the sandwich for my lunch the day after and it was equally as tasty and fresh as the day before. It shows that good ingredients and care is put into the afternoon tea platters. Presentation wise, it could have been more ornate considering the grandiose nature of Lost and Found with its botanical themes in the décor. I was half expecting some leaves to contribute to the aesthetics, but the whole tea was served on one slate board. It looked great, but I could have done with separating the cakes from the sandwiches for practicality.