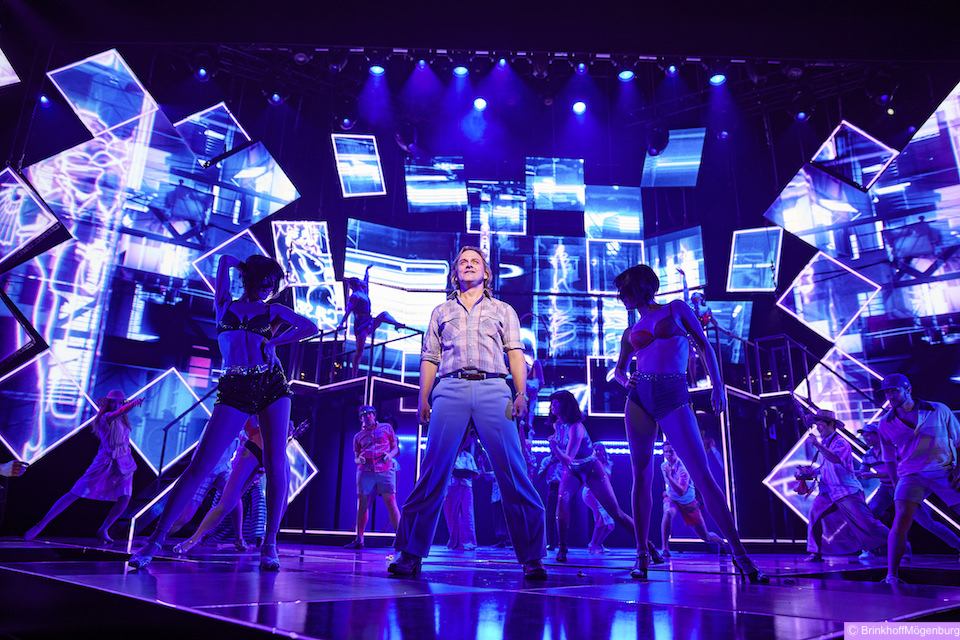 Chess is a show about Chess……and it sort of works!

This new production is its first in London’s West End in over 30 years. With music and lyrics by Tim Rice and the two B’s in ABBA (Benny Anderson and Bjorn Ulvaeus, Chess, which deals with the intense chess rivalry between the U.S. and USSR in the cold war days of the 1980s, has a political message that’s just as timely now as it was back then.
But, you might ask, how exciting is a show about the game of chess? Well, the real answer is not very exciting, nor it is very sexy. Chess can easily be described as an opera, and if opera is your thing, then you’ll will love this show. For the rest of us who like catchy memorable tunes and some razzle-dazzle and great choreography ensemble dancing, i.e. Chicago and almost everything else playing in the West End, then you will be bored at ‘Chess.’ However, Chess, which specifically deals with the rivalry between Anatoly Sergievsky (an amazing Michael Ball) and an inappropriately named Freddie Trumpier (Tim Howar) – both fictional characters – is slow to build, very slow. I was actually quite bored in the first half, but by the end of the show, I was standing on my feet.
This is not because the storyline is great or the ensemble dancing was amazing (it wasn’t), it’s because of the truly talented singers on stage. Ball, who was the original Phantom in Phantom of the Opera, commands the stage in every song he sings. Cassidy Johnson, who plays Florence, Freddie’s agent who happens to fall in love with Anatoly, is almost as good. Johnson, who most recently played Carole King in ‘Beautiful,’ has quite a few showstoppers, including the famous hit ‘I Know Him So Well.’ Also included in the cast is  X-Factor winner Alexandra Burke, who shows up in the second half, and makes a great effort in playing Anatoly’s suffering wife.
Chess starts out as Freddie arrives in Russia on a plane, cleverly staged, to take on Anatoly in a chess match to determine who is the world champion. But besides the match, Chess is, as previously mentioned, about the cold war, and the longstanding chess rivalry between both countries. It’s cleverly staged, with cutting edges to resemble a chess board, with video screens that show close up the actor’s facial emotions while they sing. And while some of the musical numbers don’t seem to work (’One Night in Bangkok’ is a bit out of place as well as an over-the-top American cheerleader sequence, and a video tribute to former chess champions has no impact), Sergievsky and Trumpier’s chess rivalry is just as intense as is the political situation between both countries then and now. Would I recommend you taking a gamble to go see Chess? The answer is yes!

CHESS plays at the London Coliseum until the 2nd June