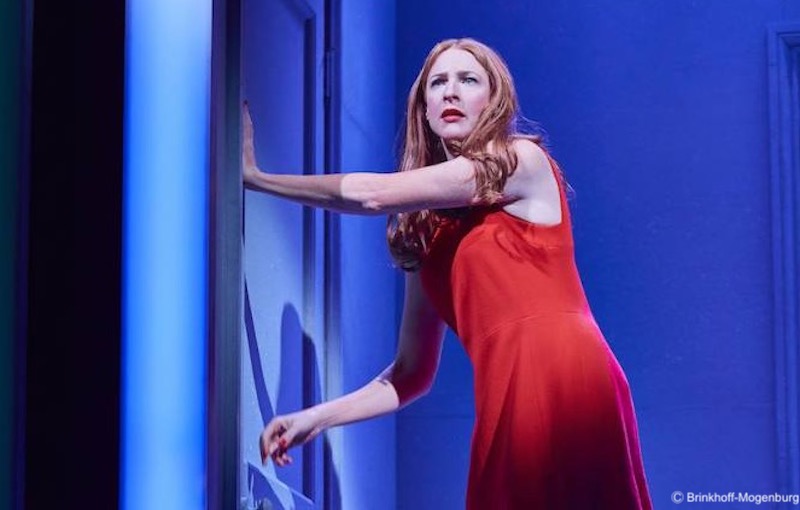 Marianne Elliott’s production of this 1970 show is as modern and up to date as possible, but please, more more more Lupone next. Here’s to the lady who steals the show!

The stage legend that is Patti Lupone is gracing London’s West End with her presence in a new revival of Stephen Sondheim‘s Company.

Lupone is not just a star, she is a STAR, having played Evita in the first New York City production in 1979 (Elaine Paige was the first Evita in London’s West End in 1978).

In Company, Lupone is not actually the star and lead of the show, but every time she is on stage the audience seems to gasp and hold their breath.

But Company is not at all about her character (an older wiser woman who doles out advice), it’s about Bonnie (played by Rosalie Craig, recently seen in the mega-critically acclaimed The Ferryman), who seems to live in a world full of couples (and of course in this modern society one of the couples is gay). All of her friends are in a relationship, but it’s her, who at her surprise birthday party (which is not really a surprise as someone tells her about it) at the tender age of 35), that she realises that she is single and alone in a couples world.

Originally a musical about a single man (Robert), showcasing a single strong professional woman is just the message that is needed right now in this #metoo time.

While Bonnie trots along, there are clever sets (by Bunny Christie) that float in and out of the stage like picture frames. And a scene-stealing moment takes place when, right before his gay wedding, Jamie (a superb Jonathan Bailey – give him his own show NOW), starts to hyperventilate and talk 100 miles a minute as to whether he will go through his wedding – it’s a brilliant turn.

But the show stealer is none other than Patti Lupone; when she sings the classic ‘The Ladies Who Lunch’ you just want to lick your lips and savour each second. Sitting on a cocktail chair, she sings absolutely delicious, and when she says “I’ll drink to that,” you just want to melt. For me, her song is the most memorable part of the show, and it is an absolute gem.

Marianne Elliott’s production of this 1970 show is as modern and up to date as possible, but please, more more more Lupone next. Here’s to the lady who steals the show!

Company plays at the Gielgud Theatre until March 2019, Book tickets now (with no fees)