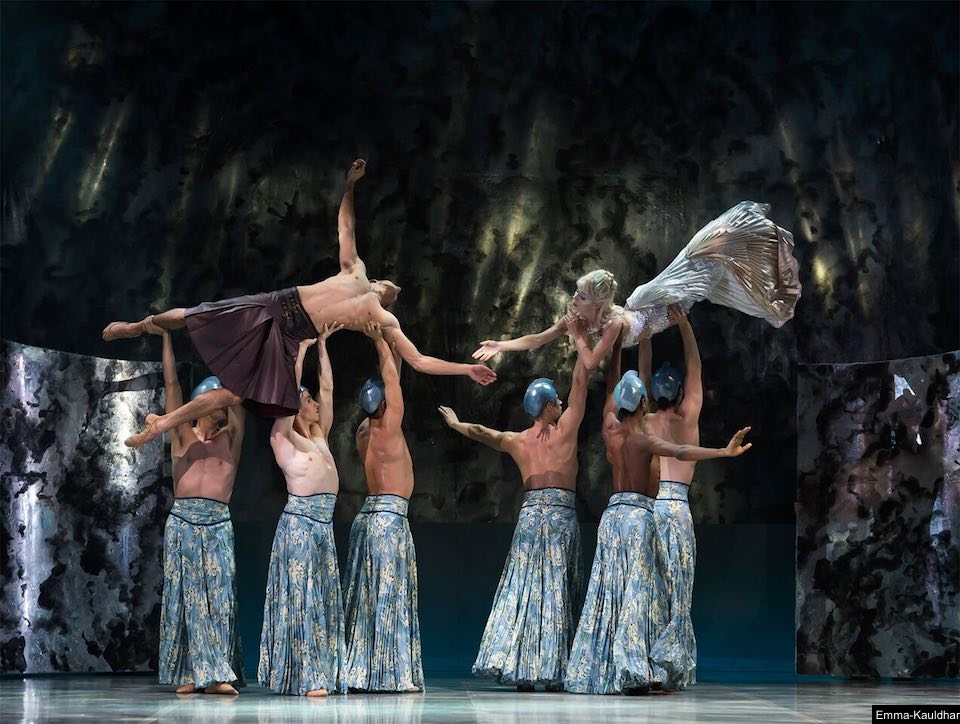 Northern Ballet return with their third new ballet this year, The Little Mermaid. Based on the much loved fairy-tale, the ballet tells the story of Marilla, the little mermaid who dreams of life above the waves, and who falls in love with Prince Adir after she saves him from drowning. But her love is unrequited; as the Prince falls in love with another young woman who he mistakenly believes saved him. Exchanging her tail for legs, and with her voice lost, Marilla sets about trying to win his heart.

David Nixon’s choreography is well conceived, and executed, with a keen eye for detail and a style that lends itself well to the underwater setting.  The nuances of the choreography are impressive, with a real fluidity of movement in the underwater setting, reflecting life beneath the ocean and the gentle swaying of the current. Nothing stays still underwater, whether it is the beautifully designed flowing costumes, the mermaids held aloft as they weave and bob across the stage, or the ever-active limbs of the ensemble cast, with the sequential movement of the dancers accurately depicting the ebb and flow of the tide. But perhaps the crowning glory to this is Nixon’s use of the ensemble cast at one entity – the sea – and using these multiple bodies as one to form the ocean into a character in itself.

The original score, which has been composed by Sally Beamish, flits between the primarily light and playful to the romantic and finally to the dramatic, feeling cinematic and engaging. The costumes work very well, with long flowing skirts that accentuate the gesticulation and mobility of the cast. Joseph Taylor was engaging and charismatic as Prince Adair, whilst Abigail Prudames enchanted as the titular character and the delicate movements of the cast as a whole was technically well executed.

The ballet itself appears deceptively simple.  The demarcation between land and sea seems to be little more than a lighting change, and two large concave structures are used to good effect to set each location; thrusting the narrative to the forefront and portraying that with ease and clarity.  The narrative is decidedly darker than the familiar saccharine Disney version, adhering more closely to the source material, but is all the better for it. What the audience is left with is a production which requires very little thought as a viewer, allowing you to simply be able to be swept away by the music and movement on stage.

The Little Mermaid is at Leeds Grand Theatre until 17th December 2017, before moving on to Edinburgh, Milton Keynes and Leicester in the New Year. In 2018, Northern Ballet will be touring with a Mixed Programme, Jayne Eyre, The Three Musketeers and The Nutcracker. Visit Northern Ballet’s Website for details.