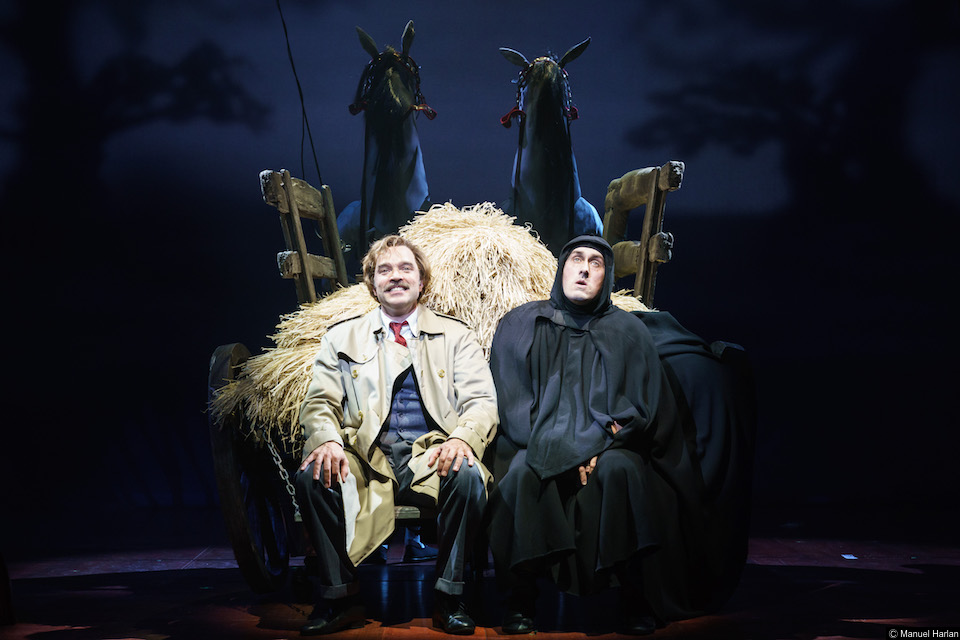 The classic comedy Young Frankenstein has finally made it’s way to the West End, and it’s just as funny, or perhaps even funnier, than the hit 1974 film.

Mel Brooks, still kicking around at the age of 91, directed and co-wrote (along with Gene Wilder) the Oscar-nominated film. Brooks wrote the music and lyrics of the stage version which had it’s Broadway debut in 2007 to rave reviews and several Tony award nominations. Its arrival in the West End is welcome because there is a lack of stomach-splitting comedies on offer, and Young Frankenstein is not only stomach splitting – it’s laugh out very loud funny!

Scientist Frederick Frankenstein (Hadley Fraser), who insists his last name is pronounced Frankensteen in order to disassociate himself from his grandfather – the mad scientist Dr Victor von Frankenstein, and which becomes a running joke throughout the show, learns that he has inherited a castle in the town of Transylvania Heights from his grandfather. He decides to check it out and boards the Queen Mary Shelley ship (Shelley is the original author of the book of Frankenstein), says goodbye to his fiancé Elizabeth (Dianne Pilkington) who sings the camp song ‘Please Don’t Touch Me’ in reference to her devotion to Frederick. Once Frederick arrives in the town, he is greeted by Igor (Ross Noble), a man with a hump on his back which keeps on changing sides. Frederick also hires an assistant to help him at the castle, and this assistant is the blond, beautiful, buxomy and German Inga (a wonderful Summer Strallen – who practically steals the show with her looks, and dumbwitnedness). They ride up to the castle on a wagon to the tune of ‘Roll in the Hay (because they are literally on hay and during the bumpy ride Inga practically exposes almost every part of her body – it’s too funny to be seen! Once in the castle (the production designer cleverly takes up deeper and deeper into the castle through the use of darkness and doors that continually reveals amazing new sets). There we meet the fabulous housekeeper Frau Blücher (Lesley Joseph) who has an absolute scene-stealing number with the song ‘He was my Boyfriend’ in reference to Victor Frankenstein. While in the castle, Frederick and Inga find a secret entrance to the laboratory, which inspires Frederick to create a monster in memory of his grandfather. Well, Igor gets a corpse for the experiment, but it’s not exactly what Frederick had in mind, nonetheless, a monster is born, but knocking on the door are the town’s villagers, led by the one-armed and one-legged Inspector Kemp (Patrick Clancy) (it literally cost him an arm and a leg! Tha dump!). He and the townspeople know that something is up in the castle, that many years ago bad things happened there, and they want to find out exactly what is going on in there. And the rest, as they say, is history.

Young Frankenstein continues with the laughs, and laughs, and laughs, culminating in the rib breaking song ‘Puttin on the Ritz’ sung by The Monster, Frederick, Inga, Igor and company. This show has got to be the funniest show I’ve seen in the West End in a long time (funnier, I think, than ‘The Book of Mormon’). And all the cast are excellent, but Strallen and Joseph are lucky enough to be given show-stopping songs to sing, and Noble as Igor is just too good to be true, and let’s not leave out Shuler Hensley who plays, to great effect, The Monster. This show is just about perfect for a comedy, and Director and choreographer Susan Stroman has created a masterpiece, while kudos goes to set designer Beowulf Boritt. It’s a shame that this show is at the small Garrick Theatre, it needs a bigger theatre just so that more people are able to see it and enjoy it, but nonetheless it’s one you definitely don’t want to miss!