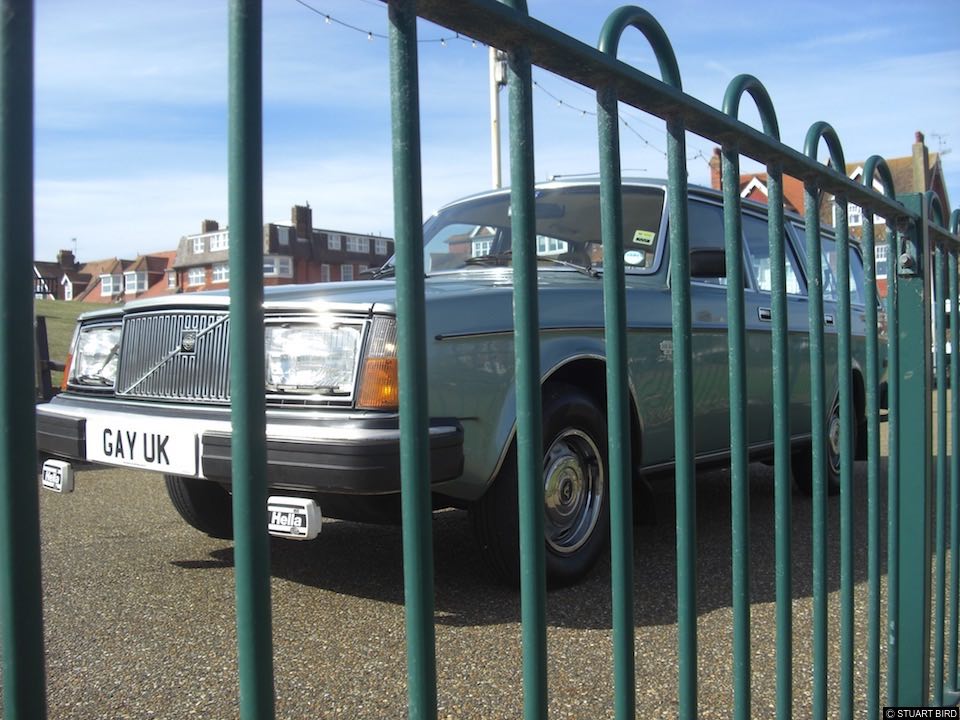 When someone says “think Volvo” there are many things that you think of. If you are mechanically minded you might think of extreme safety. If you are a gentleman with a liking of old things, you think of cavernous boots and the ability to carry grandfather clocks.

If you are gay you think of uber-posh socialite Margo Leadbetter and her much put-upon husband Jerry. You also think of Felicity Kendal too. Before you came out you had a bit of a thing for her doe-eyed good looks. Anyway, I digress about myself, we are talking Volvo, not vulva.

The 1974 Volvo 200 series from front bumper to the bulkhead was all new. From front screen and beyond it was the same as the 100 series it replaced, give or take, a bit of trim here and there. The frontal area was treated to a sloping wedge as first seen in 1972 with the VESC (Volvo Experimental Safety Car) Other important changes related to the brakes that were discs all-round and rack and pinion steering with power assistance available on higher specification models.

To differentiate the 260 model with its V6 engine over the 240 4-cylinder was the grill being enlarged and upright while the bonnet had a protruding ledge that sat over the grill. They also gave it square headlights and some chrome brightwork trim. You couldn’t say it made it look a million dollars compared to the lesser 240s but it added a visual difference to let those out there know that you had bought a flagship model from Sweden.

What did try to look like a million dollars was when Volvo asked Italian coachbuilder Bertone to build the 262C coupe version. A two2 door low-roofed version built between 1977 to 1981. It wasn’t money well spent. The 200 didn’t have sex appeal and removing two doors and having an elephant sit on the roof did nothing to further its appeal.

The Volvo 265 GLE estate was an expensive car. As is the example here, in 1978 it cost £7800. For that money, you did, however, get the PRV V6 from Peugeot, Renault, Volvo (hence the name) and leather luxury. It also came with air-conditioning, all-round electric windows, electric door mirrors and headlight wipers. In an estate, this was top-notch luxury.

Estate car drivers in the 70s and through most of the 80s were treated as second-rate motorists. Very few offered luxury to the carryall estate.

Ford offered luxury options on their estate versions. In comparison to price, the Ford Granada Ghia was available with a better V6 option and cheaper too. Datsun offered the generously appointed wooden clad 280C for less. If you were not after such luxury but instead favoured sheer carrying capacity and technical advancements, then you could have the Citroën CX Safari.

It’s not that the Volvo 200 series was without its technical advancements. It’s just that they were all pretty much hidden under the skin. Unlike the bumpers that were there to remove your skin should you walk into them. Big bumpers were a thing of Volvo styling. Mostly born out of American legislation for 5mph impact bumpers, Volvo fitted them to everything they imported into Europe too. Toymaker Matchbox even got in on the act and fitted an impact bumper to there Superking Volvo 245 model.

This big bold bumper took on a form of styling cue that Volvo then used when redesigning the 100 series to the 200 and the square bumper resulted in keeping the square styling. And this went onto became the new design language used by Volvo until they learnt that they could blend them into the bodywork.

The legendary bumpers that were sometimes fitted with reflective stripes across them were not the only visual things you could see. A Swedish trick was that the side lights illuminated all the time. Better to be seen with a 5-watt bulb glowing then none at all. Swedish regulations also stated that a headlight wash system was available too.

Under the skin, the engineering department of Volvo was busy bringing collapsible steering columns and crumple zones into the main arena of car design and brochure print. Volvo was sold as a safe car. The 200 series also had door bars.

Indeed Volvo had a bit of an obsession with crashing their cars. In their home country, word was that if a Volvo was involved in an accident they would study the crashed car, makes notes and use it to further their enviable reputation for safety.

Owner Graeme has owned this example for two years. In that time he hasn’t had to do anything to 64,000 mile “Burt” except give it a good wash and wax and regular servicing. The car is totally original and comes with dealer fit options like tow bar and front fog lamps.

Riding in the 265 you are immersed in the then luxury of the 1970s. The leather has really stood the test of time. The general fit and feel of the car is as good as it was back in 1978. The doors shut with a hefty thud. Much to the annoyance of your neighbours, you can’t shut them quietly or they won’t shut at all. Not that you would care about waking them up.

It all worked well. That V6 engine, however, did not. Fitted to the hopeless Borg-Warner automatic 3-speed box it makes a terrible mess of an engine that won praise in the Peugeot 604 and Renault 30.

Sadly according to the DVLA, there are only 7 265GLE estates left on the UK roads. It might look as soft around the edges as a fresh stack of post-it notes but this car revolutionised car safety and if you’ve ever been in an accident, chances are it was this car genetics that saved your life.

Thanks to Andrew Wood for the use of the Matchbox toy picture.

GCCG member Graeme for use of his Volvo.