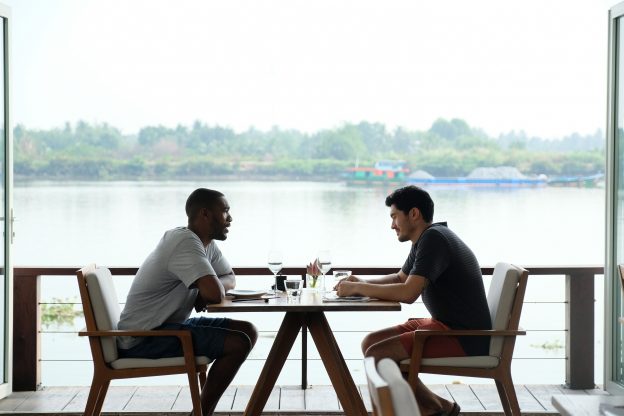 From the man who brought us the brilliant ‘Lilting’ in 2014 returns with his new offering Monsoon.

Lilting, directed by Hong Khaou, told the story about the death of a young gay man leaving his lover to deal with a grieving Chinese Cambodian mother. It was quiet and meditative as is Khaou’s new film Monsoon.

In Monsoon a young man of Vietnamese descent, who now lives in Britain, returns to Saigon to return his mother (her ashes) to her home country, a country her and her husband fled during the Vietnamese war. But Vietnam is also a country that Kit (Henry Golding) also knows very little about – he was 5 when they left. So his return to the home country is a poignant one, his father has also died and Kit’s brother is bringing their father’s ashes so him and Kit can bury them together. While Kit returns and visits old friends of his and his mothers, he falls for American Lewis (Parker Sawyers) and establishes a semi-relationship with him. While the gay storyline is a bit irrelevant to the focus and mission of the plot, it’s played out against the backdrop of a city full of traffic, noise, people, motorcycles, and beautiful sunsets that linger in the horizon.

Monsoon also brings us lulled moments – quiet and contemplative – in a film that’s oh so short at 85 minutes.

Henry Golding (Crazy Rich Asians) is good in the role – but the film itself could’ve explored more of his background and his relationship with his family (perhaps flashbacks) to give more of a background into his homosexuality. In all, if you’re looking for a meditative and quiet film, this film is for you.

‘Monsoon’ is now out in UK Cinemas.