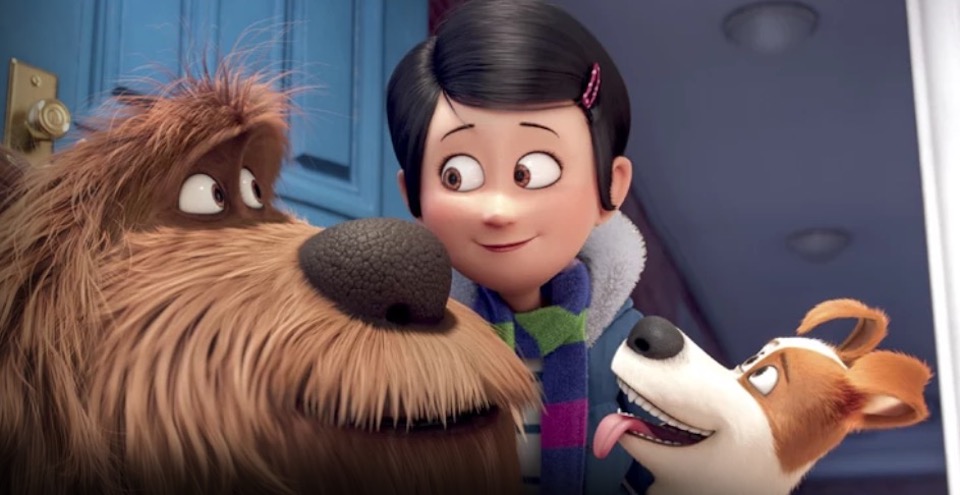 THE SECRET LIVES OF PETS – Is this the best film of the year? A modern animation film with as much appeal for adults as kids – just like Pixar used to be with added heart and more laughs per minute than Mrs Brown’s Boys or Ab Fab.

Nutshell – A group of pets have one hell of a day when their owners are out at work. Centred largely around two dogs that via a chain of events get themselves lost across New York and then fall in with some very bad animals indeed. The rescue is on from another hound in love. He meets, an overweight cat, some birds and a rodent and it is pure happiness from start to finish.

You will laugh in the first thirty seconds and still be splitting your sides 90 minutes later.  Let’s make it simple; this is a classic and a must see. In this depressing Summer. This film is the tonic we all need and then some. Bloody fantastic.

Tagline – ‘Ever wonder what your pet’s do all day?’.

THE GAY UK FACTOR – Don’t be sick, if you’re into animals in that way move on now. This is simply the best fun you can have with your clothes on.

Cast – Voice cast of quality rather than pointless star names for the sake of it. Albert Brooks, Kevin Hart, Louis CK, Dana Carvey and Steve Coogan.

Key Player – Cinco Paul, Ken Daurio and Brian Lynch the three writers that give us a fresh, fun, laugh out loud, thrilling and exciting story that all this year’s live-action blockbusters have failed to do.

Budget – $75 Million only opened in a couple of European territories but we expect it to make over $150 million and climbing in a month then there are DVD sales, TV Deals, toy sales and a million other memorabilia marketing possibilities after all this is the team behind the Despicable Me series and look what they did with that Minions brand.

Best Bit – 0.01 mins; Which is when you first realise how good this movie is going to be but we could have picked any of the 90 minutes right through to the superb Bill Withers song climax set piece.

Worst Bit – There isn’t one. There we said it. Maybe if you don’t like snakes, there is a dark sequence in the middle that will leave you squirming.

Little Secret – 2016 will go down as the best year for animation in history ironically in a year that has been largely rubbish for live action. With Zootropolis, Kung Fu Panda, Angry Birds, The Jungle Book, Ice Age and Finding Dory plus more to come all hitting really big the animated Oscar race will be cutthroat we presumed it was a shoe-in for Zootropolis, but now it is probably handing the trophy over to these furry critters.

Movie Mistake – There is never any mistakes in animation just loads of opportunities for fun inserts, and here we have a lot of references to characters from the studios megahit Despicable Me series as well as posters on buses etc. for their forthcoming movie releases like Sing – never miss a chance for a few subliminal advertising guys.

Any Good – Well Yessss! Hopefully, by now you will have got the message that this is unmissable. If you own a pet of any sort or love animals, then you will get even more out of this. Take your niece, your nephew, the noisy kid from next door but whatever you do go and see the most lovable group of animals since Mowgli set foot in the jungle or Babe learnt how to herd sheep.