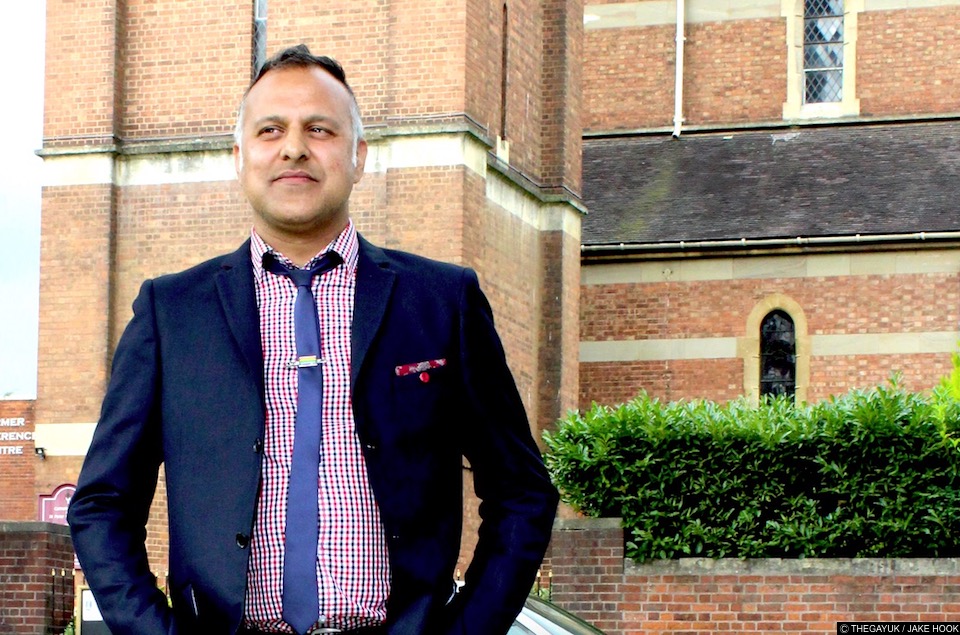 Khakan Qureshi was one of Warwickshire Pride’s key speakers… Read his epic speech about being gay, Muslim and dealing with division.

No. Being LGBT and holding the flag is about being able to connect with others, understand each other’s struggles regardless of colour, creed or class and not say I’m  as Good As You but say I’m the SAME as you meaning:

We Are All Human.

I was invited to speak at this event as there was a lack of diversity and the organisers wanted persons from minority ethnic backgrounds. They couldn’t get Rupaul so here I am !”

In the UK, we commemorate 50 years since the partial decriminalisation of homosexuality. Long gone are the days when many LGBT were in the closet, discreetly knocking on doors, and entering clubs and bars which were underground and only known to the LGBT community. 50 years of challenging the status quo has brought changes and in recent years we have civil partnerships, the right to adopt and foster and equal marriage.

We talk about diversity and representation but there is also division and derision.

On the peripheral looking in, the sense of being different can lead to isolation and in my case, it provided me with a different world view.

In the mainstream, I was too Asian.

Within the South Asian community, not Asian enough.

I didn’t present to the world a confident young man.

I was shy, quiet, an introvert. I didn’t fit in with the gender stereotypes like my brothers and peers, who displayed outward signs of being very much heterosexual men – confident, ambitious, competitive, sporty.

Whilst I felt more comfortable at home with my mother and sisters, watching TV, helping them cook and clean, offering them style tips on dress and makeup.

The more apparent forms of homophobia, although I didn’t recognise it as such at the time, and discrimination came from my brothers who would mock and ridicule, my voice, my mannerisms and my close relationships with the females in the household.

Later, as I shied away from them, I created my own make-believe world in which they didn’t exist.

Unfortunately for me, the bullying didn’t just stop with them. It would sometimes rear its ugly head at school. But again, I was protected by female companions and teachers who realised I was different in the sense I was very creative and could express myself very well in the written word. I daren’t speak up too often, especially after having years of torment from my brothers, brothers in law and peers, about how I spoke or sounded which made feel too embarrassed about my voice.

When I spoke up at school, it led to all forms of humiliation and name calling. It identified me as “queer, sissy, gay, batty boy” in amongst other name calling such as “Paki, brown boy, coconut “ and variations on how to pronounce my name –

Being Muslim and gay, you don’t just deal with coming to terms with it. There’s the cultural oppression and religious guilt to contend with.

But I was fortunate.

When I came out, aged 22 to my mum 26 years ago, she said whatever makes you happy makes me happy.

And my happiness stems from being in an interracial relationship of 26 years.

But in recent years, with the rise of homophobia, bi-phobia, transphobia and Islamophobia, it makes me wonder how far we, as an LGBT community, have really come?

We don’t want our lives and identity defined by labels.

I don’t want to be boxed in because of the colour of my skin, my religiosity, my age, my relationships, my sexual orientation. I want to be allowed to be me, burst out of that box and say to the world I am what I am.

Being LGBT isn’t about one-upmanship “my oppression is worse than yours” or “Muslims persecute gays, therefore, being white LGBT gives you higher privileges”.

No. Being LGBT and holding the flag is about being able to connect with others, understand each other’s struggles regardless of colour, creed or class and not say I’m  as Good As You but say I’m  the SAME as you meaning We Are All Human.

Being LGBT, being human means reaching out and overcoming obstacles and difficulties, offering support and understanding, demonstrating compassion and delivering words which say I am with you all the way.

We are continually looking outside when we really need to look on the inside and face reality.

We are LGBT and your truth is not the same as mine.

What I do know is that we need to navigate our own lives in the here and now, be mindful of our circumstances and safety, and not look to what others say or all the yesterdays.

Martin Luther King said, “Let us not seek to satisfy our thirst for freedom by drinking from the cup of bitterness and hatred”

Acknowledge the past as we can’t change history, try and live for today as we don’t know what tomorrow will bring.

Whilst we are trying to be citizens of the world, let’s try and educate and inform others about the A-Z of identities to make future generations more understanding and accepting.