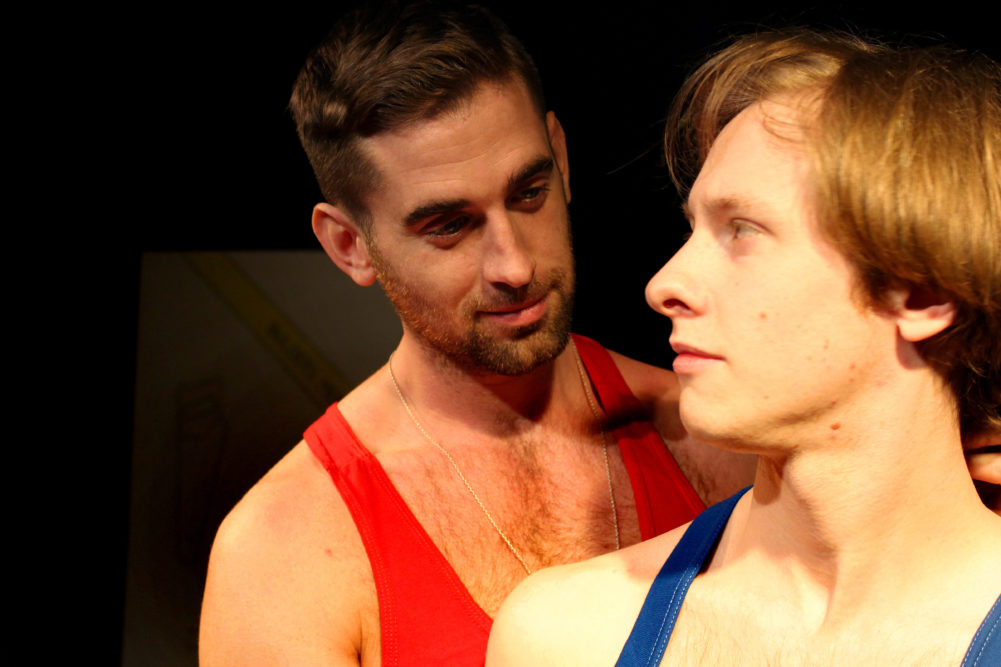 Jeff is a married man with a fetish for wrestling. He’s walked out on his religious but shrewish wife and is hiding out in his hometown in southern England where he’s having a fumble with grieving youngster Malcolm. By coincidence, Malcolm’s boss is Jeff’s Biblical claptrap spouting father.

Is a play about a secretly gay married man still relevant in 2016? Sadly it is. It’d be naïve to think that being gay in contemporary British society was accepted by everyone and that gay men weren’t still suppressing their sexuality and trying to hide in plain sight. Any foray into gay life will tell you that the phenomenon of the closeted gay man is still very much present. You can’t spend more than five minutes on a hook-up app, the Internet or in a sauna without tripping over a married man or two. The issues in the play are still prevalent. Gay men might be able to marry and public opinion might have moved on but people are still prejudiced and still spout obscure parts of religious tracts to justify this. Some people are still so affected by the prejudices of others that they suppress their natures and try to be things that they aren’t.

In spite of this there’s something dated feeling about “Abominations”.

The problem with the play isn’t the subject matter but the dialogue and characterisation. Whilst Jeff feels generally convincingly drawn and credible, his wife feels like a two-dimensional throwback to a dated sit-com. Malcolm is an earnest ukulele-playing buffoon who reveals few other character traits than naivety and rather than endearing, is more of an irritant. The dialogue is stilted and quaint at times. Scenes are short with awkward shuffling pauses. In spite of some well-drawn sections the sum of the play is much less than its parts and fails to gel. The comedy often falls flat and sits awkwardly with the more intense and better-written scenes.

The saving grace of the piece has to be the stunning central performance from Alexander Hulme as Jeff. He handles the part with style, imbuing the character with credibility and hinting at the shifting emotional landscape of a man unravelling. He’s all swagger and brittle chav charm but manages to give glimpses of something deeper and darker with a softer core. He’s also very easy on the eye and displays a lot of flesh that distracts the viewer. In the midst of the play there are some genuinely moving scenes between Jeff and his father and Gary Heron displays some fine acting that ably supports Hulme in his role.

This is definitely a play that had potential and there are glimpses of unrealised style and impact. The well-written lines stand out and there are scenes that have real power. Sadly, the finished overall product felt almost as tired and lacklustre as the location of the theatre: Camden High Street.