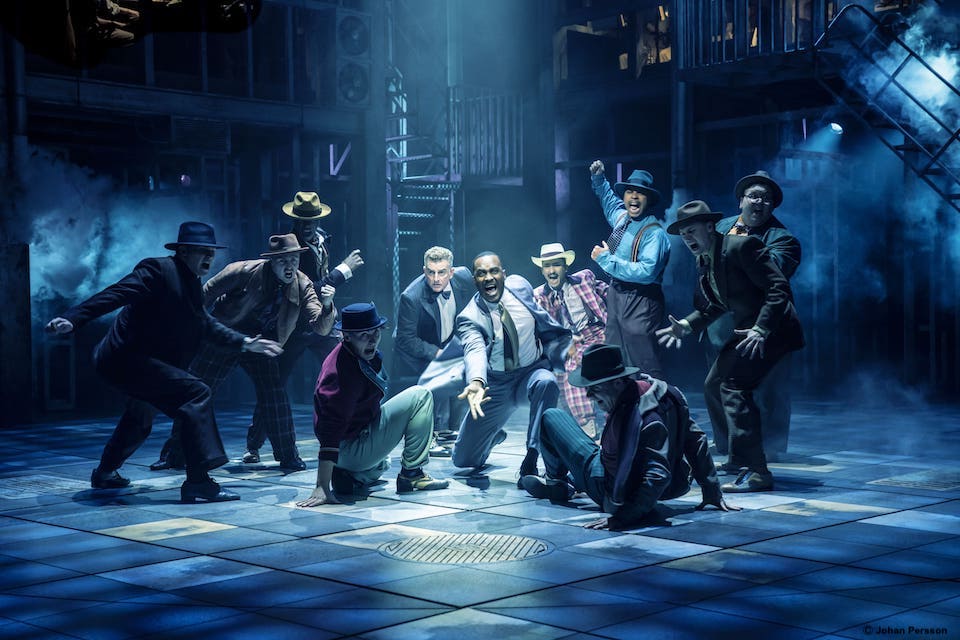 In an attempt to gather enough money to organise an illegal craps game, racketeer Nathan Detroit enters into a wager with gambler Sky Masterton that he can’t convince a girl to accompany him on a gambling trip to Havana. The catch? The girl in question is Sarah Brown, a religious and upstanding member of the Salvation Army, whose only interest in men like Masterton is in trying to convince them to leave behind their life of sin. So whilst Nathan Detroit does everything he can to avoid marrying his long suffering fiancé Miss Adelaide, Sky Masterton unexpectedly falls in love with the Sarah, as he tries to win the bet.

Robert Hastie’s revival is punchy, pacey and perky and zips along at a cracking pace. With an ingenious set design of sliding panels which slot together to form the backdrop of prohibition era New York, and zoot suits which are as sharp as the script, Sheffield Theatres production of this classic musical is utterly delightful.

Kadiff Kirwan oozes charisma as Sky Masterton and Martin Marquez brings a cheeky charm to the stage as Nathan Detroit. But whilst the ‘guys’ were great, the stage belonged very much to the ‘dolls’. Natalie Casey, as the lovelorn Miss Adelaide, beautifully balances comedy and sadness whilst giving a masterclass in musical theatre; and Alex Young brings warmth, humanity and female independence to the role of Sarah Brown.

There is some dazzling choreography which the cast (and the audience) delight in, and the big numbers, including ‘Luck be A Lady’ and ‘Sit Down You’re Rocking the Boat’, don’t disappoint at all. For a show written some 70 years ago, there is something about this production which feels really fresh and vivacious. Thoroughly enjoyable and tremendous fun, Guys And Dolls is the perfect antidote to the dark winter evenings and is everything you would want from a feel-good classic musical.

Guys and Dolls plays at Sheffield Theatres until 18th January 2020.