THEATRE REVIEW | Land of our Fathers 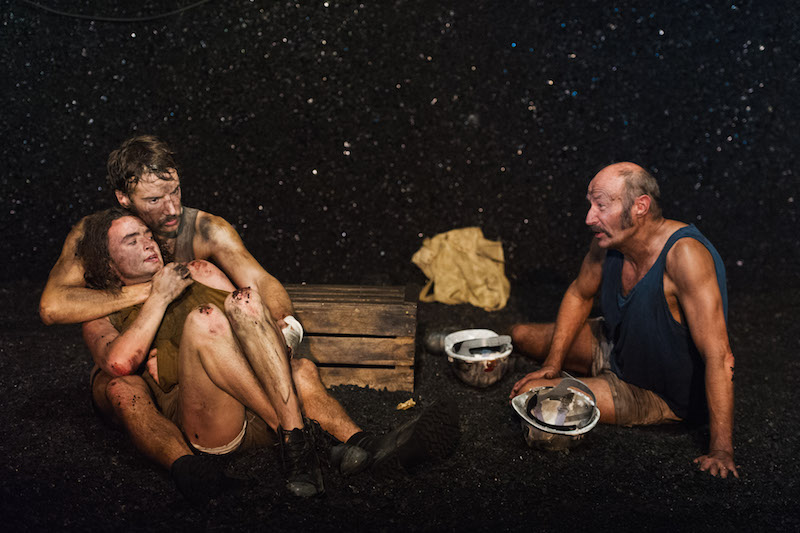 Six miners wait to be rescued in the brutal and powerful ‘Land of our Fathers.’

It’s 1979 in South Wales, in a dark and dirty mine where the men are trapped. And the six of them struggle with the brutal conditions, and each other, in this two hour play. There’s Mostyn (Joshua Price) who likes to sing show tunes but who also misses his mom; there’s brothers Curly (Tomos Eames) and soon-to-be dad Chewy (Taylor Jay-Davies); chief of the bunch Bomber (John Cording); Polish Hovis (Robert Jezek), and the old man of the bunch Chopper (Cornelius Booth). They don’t have much food among them, they need to ration carefully because they don’t know when they’re going to be rescued. But writer Chris Urch’s script delves deeper into their situation, we get to hear their hopes, and their fears, and see the terror in their faces when they realise that they might not get to see natural light again.

Land of our Fathers had it’s first run in 2013 in a 63-seat venue called Theatre 503 in Battersea. After being nominated for several awards and playing to sell-out audiences, it transferred to Trafalgar Studios in September 2013. Now it’s playing at the very intimate Found 111 Theatre on Charing Cross Road in Central London.

It’s the perfect setting for a play with a minimalist claustrophobic set where the audience gets to see the actors up close. We can see their blood (literally), sweat, and tears as they struggle with their situation. And all the cast are excellent. The men open and close the show with the song ‘Land of our Fathers,’ – it’s the National Anthem of Wales, and it’s a fitting title for a show about Welsh miners.