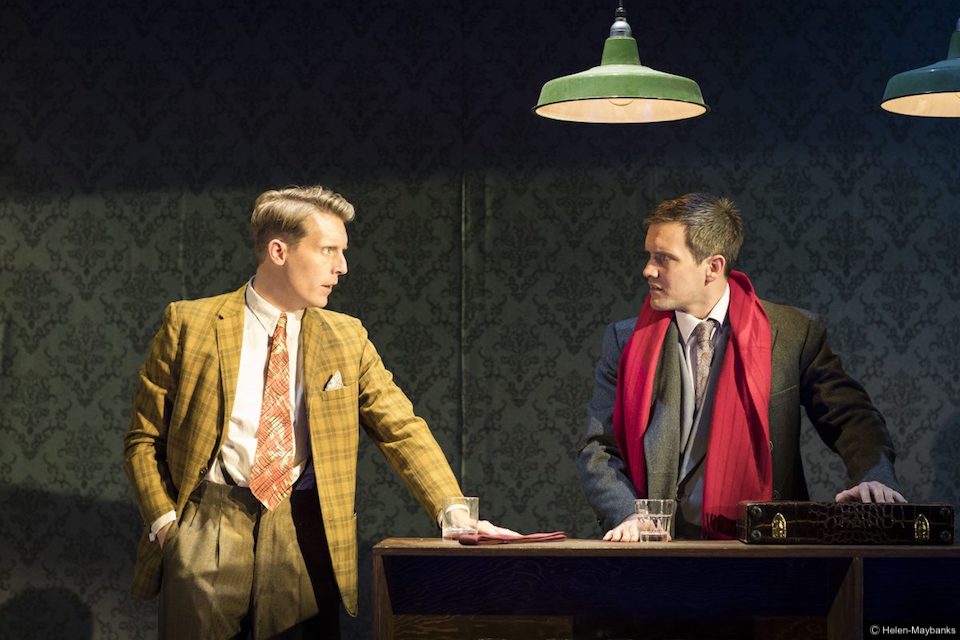 During a chance encounter on a whiskey-soaked train journey, two strangers, Guy Haines, a respected architect and Charles Bruno, a drunken playboy, jokingly plot to commit a murder to assist the other in moving on in their lives. Bruno proposes that Haines kill Bruno’s overbearing father, whilst Bruno himself will kill Haines’ adulterous wife. But what starts out as a drunken joke becomes something more sinister, as Bruno keeps up his end of the bargain and expects Haines to do the same.

Based on the novel by Particia Highsmith, the narrative of the piece starts promisingly enough, with sufficient threads of the story put forward to generate interest, but the early promise simply isn’t sustained, as the play draws itself out into something over long and turgid, leading to an incredibly dry second act which never even begins to gather momentum.

Feeding into the dryness of the piece are the performances from the cast which were truly terrible across the board. Jack Ashton is suitably dashing and fares best of the bunch with a rather flat portrayal of Haines, but never comes close to depicting a man whose life is in turmoil as a result of the relentless harassment by Bruno, the murder of his wife or his harboured dark secrets. Chris Harper is just plain irritating rather than menacing, with a pantomime-villain portrayal of Bruno, being more akin to an annoying drunken work colleague at the office party than a scheming manipulator and calculating killer; and Helen Anderson’s over the top histrionics as Elsie Bruno were sharply juxtaposed with the stiff, wooden delivery of Hannah Toiton as Haines’ new wife.

Anthony Banks’ direction is sadly lacking, and manages to produce a play with no drama, no tension, no menace and no pace. The set, comprising of a series of sliding panels, projections and micro-sets looked lavish and generally worked well, which was the saving grace of the production; but sadly a flashy set design is not enough to prevent this thrill-less thriller from coming off the rails.

Strangers On A Train is currently at Sheffield Lyceum before continuing on its national tour until 31 March 2018; calling in at Glasgow, Birmingham, Manchester, Woking, Richmond, Cambridge, York, Aylesbury and Cardiff.