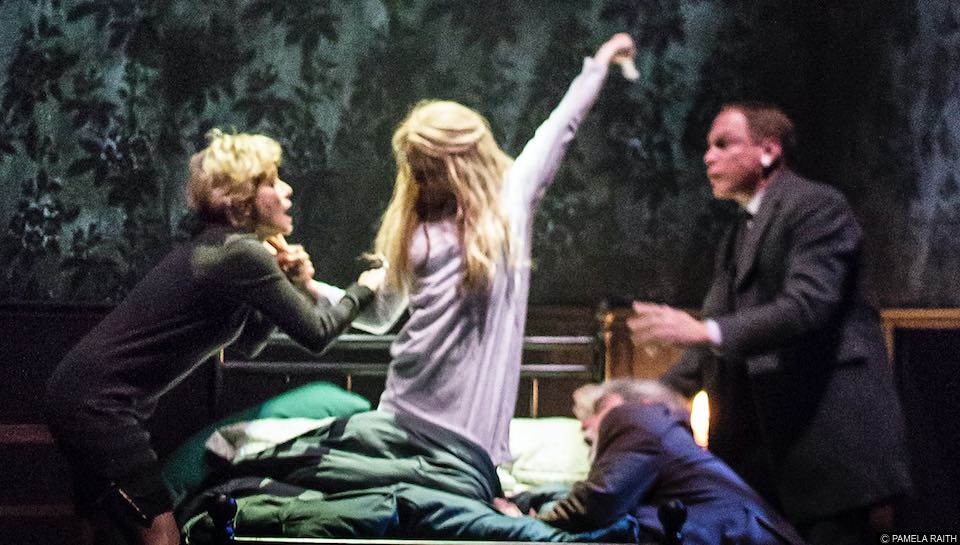 Breaking news: There is a young girl who is possessed by the devil in the West End.

Her name is Regan, and she is 12 years old. She once used to be a playful little girl, happy, singing, always with a smile on her face. Then one day she started mentioning to her mom that she had an imaginary friend in her room. This friend, which went by the name Captain Howdy, would talk to her, and tell her to do things. But eventually Captain Howdy started to take over her life, and her body, while mysterious and strange goings-on take place in the house (windows opening, doors not closing, strange writing on the wall). But the worst was yet to come. Regan started to harm herself, and harm others, and the sight of blood didn’t phase her. But she was becoming extremely dangerous, not just to herself, but to the people in her household, which includes her actress mother’s best friend and film director, Burke Dennings. At some point, Regan needs to be tied to her bed, and it’s then, and only then, that we realize that Regan is possessed by the devil. She spews vomit, turns her head at a 360-degree angle, and levitates over her bed – actions that only can be performed by something that is very very evil – not of this world. Regan’s mother by this time has lost her wits – she doesn’t understand and can’t cope with all this, so she brings in Father Damien Karras whose job it is to determine if Regan is actually possessed, and soon enough he realises this is the case. So it’s time for the Exorcism and it will take the work, and expertise, of one Father Merrin to free Regan of the evil inside of her, an evil that could kill Regan if it’s not exorcised out of her in time.

Based on the hit, and terrifying movie of the same name, and now cleverly adapted for the stage by John Pielmeier, The Exorcist is scaring audiences at The Phoenix Theatre, and scaring is putting it mildly. What the director, Sean Mathias, and cast have done is to have successfully brought the story to a live audience and all of its bone-chilling and terrifying moments. With the excellent performance by Clare Louise Connolly who lives and breathes Regan and the voice of the devil by Ian McKellan in tandem they practically make is a believable experience. Peter Bowles chews up his scenes as Father Merrin and Adam Garcia is a very good as Karras while Tristram Wymark as Dennings has the much needed funny lines in the show to relieve the chills. The Exorcist is downright scary, not suitable for children, but nice and scary for the adults. Perfect for this time of year.

The Exorcist plays at the Phoenix Theatre until 10th March 2018