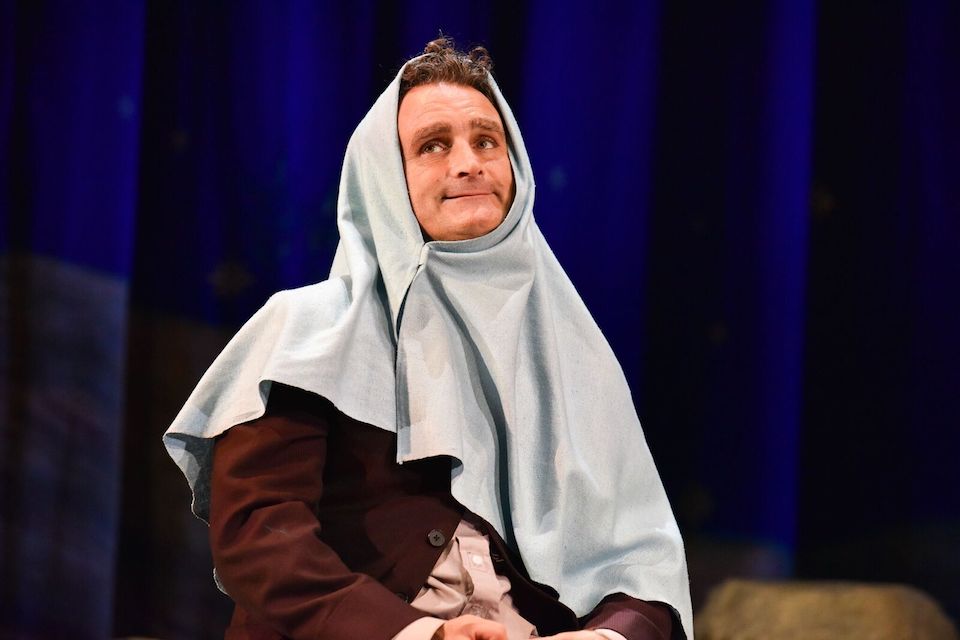 The Messiah is certainly a feast for the ears and eyes. Through revolving stages, versatile props and clever lighting, as well as the comedy mastery of Hugh and John, and with angelic Lesley, this show is one worth watching time and time again.

a naughty nativity that goes wrong\

Hugh Dennis, John Marquez and Lesley Garrett present a hilarious version of the birth of baby Jesus with pleasurable modern references. The Messiah by Patrick Barlow gave Birmingham a night of gut-busting entertainment. The comedy and writing was really intelligent and versatile for the audience age-range – fantastic!

The premise is a small theatre company puts on a nativity play, but the two main characters Maurice Rose (Hugh Dennis) and Ronald Bream (John Marquez) break out of character to deal with personal issues and have a full-blown domestic.

Hugh was very clever with his comedy, the jokes landed, and his contrast to John’s foolish character, was sublime. The dryness of Hugh’s humour complemented his character perfectly. The tremendous energy of multi-part playing was very captivating.

John Marquez was one of the funniest actors I have seen this year. His role as Mary was comedy genius; every time he put the cloth over his head the audience went wild with laughter, and every word he spoke was mirthful. Even though each character had very similar traits, John’s natural flair made each one comedy magic.

Lesley Garrett was amazing with her heavenly vocals interluding between the madness of the two other characters. Lesley added a new layer of comedy singing when she wanted to and interrupting scenes with Hugh and John. It was incredible to see Lesley live like that.

The Messiah is certainly a feast for the ears and eyes. Through revolving stages, versatile props and clever lighting, as well as the comedy mastery of Hugh and John, and with angelic Lesley, this show is one worth watching time and time again.