British Airways did something amazing for this couple 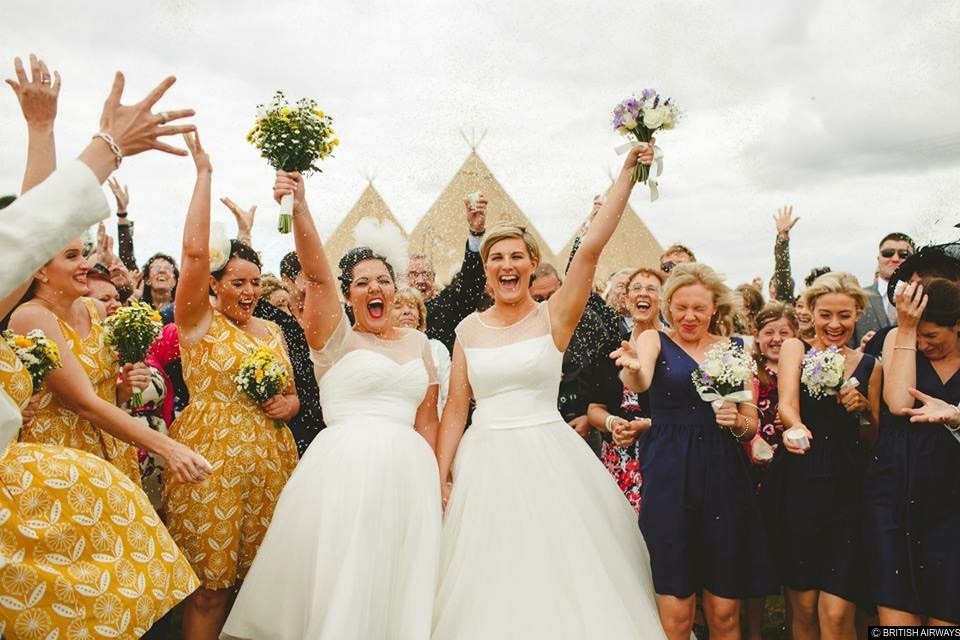 Lisa and Hayley, despite being married live 10,000 miles apart, due to a family tragedy, British Airways did something amazing for them.

Lisa wrote into the airline’s BA Magic campaign to tell their story. She explained the couple had met in Australia in 2011 and moved together to the UK in 2012. Just before Hayley’s 30th birthday, Lisa took her to Paris and proposed. Hayley said yes, and the pair married in a beautiful ceremony in Derby surrounded by friends and family in August 2015.

The only people that couldn’t be there were Hayley’s mother, Debbie and father, Steve. Steve was recovering from Stage 4 tongue cancer and Debbie has the degenerative condition, Muscular Dystrophy, so the journey was just too much. They were there thanks to Facetime technology though, with Steve delivering a very proud father-of-the-bride speech.

The happy couple moved to Glasgow, where Lisa started her dream job as a police officer in one of the city’s most deprived areas, while Hayley pursued her passion, establishing herself as a blogger and vlogger of all things vintage.

Sadly their happy bubble burst just a year-and-a-half later when Hayley received the devastating news that Steve’s cancer had returned and was now terminal.

On Valentine’s Day this year, she rushed back to Australia leaving Lisa, their beloved pet dog, Hettie and all her friends behind in the UK.

Steve died peacefully with Hayley by his side on March 26.

Hayley has been in Australia ever since, helping her Mum sort through her Dad’s affairs and assisting her Mum through her own condition. Lisa and Hettie have moved back to Lisa’s hometown of Derby, and she is now an officer for the West Midlands Police Force.

The BA Magic team read Lisa’s letter and knew they had to reunite the pair so, with Lisa, Debbie and Hayley’s boss, Adam’s help, they planned the surprise of a lifetime.

After weeks of secretive planning, British Airways cabin crew member, Claire Allinson found herself hidden in the wings at a conference Hayley was attending, with a pair of return business class tickets from Sydney to London for Hayley and her mum, Debbie.

Under the ruse of a work request, Adam asked Hayley to remain seated at a table in the large conference room as it was cleared after lunch. As Hayley waited for him to return, a video of Lisa rolled through one of the giant screens telling her to get packed as she and mum, Debbie were flying to London the following day.

After a sleepless night for the pair, they were picked up early and welcomed at Sydney’s Kingsford Smith Airport by the British Airways team, before boarding the aircraft early and being seated with a glass of champagne.

During the 22-hour flight Hayley and Debbie caught up on some much needed sleep on the airline’s fully flat business class beds, watched numerous films and enjoyed the in-flight catering.

Waiting for them at Heathrow was Lisa complete with balloons, flowers and their dog, Hettie, for an emotional reunion.

Hayley said: “I couldn’t believe it and it certainly didn’t sink in until I was back in the UK! It all happened so fast and was like a dream. One day I was at a conference, the next I was in a British Airways business class seat on my way to London to be reunited with my wife!

“Being able to take the trip with Mum was the most special thing and it has meant the world to her. She’d never been on a long-haul flight before and it would have been Dad’s dream to take her on holiday like this. It has awakened so many possibilities within her. This is just the beginning of a new chapter and I know there are many adventures in store for her yet.”

Lisa said: “I got in touch with British Airways more out of hope than expectation. I couldn’t believe it when they said they’d help us. The fact we could surprise Hayley and that Deb could come too, knowing she’d be comfortable and looked after on the flight, made it all the more special.

“Hayley must have wondered what was wrong with me in the run-up to them arriving as I was constantly rushing off our frequent Facetime calls as I was so worried I’d give it away!

“I barely slept a wink the night before they arrived and Hettie and I were at the airport bright and early waiting for the flight. It was so wonderful to see them both appear through arrivals and we had the most amazing time seeing friends and family, visiting Buckingham Palace, walking the gardens of Chatsworth House, touring villages with thatched roofs, savouring proper Cornish pasties and sipping champagne on the London Eye.”

Carolina Martinoli, British Airways’ director of brand and customer experience, said: “As soon as we read Lisa’s email, we wanted to help. They’ve all had an incredibly tough time and it was in our gift to make a big difference.

“It looks like they’ve had an amazing trip to London and we were delighted to hear that it has opened up a world of travel for Debbie again and shortened the distance between Lisa and Hayley seeing each other next. It’s lovely that we’ve been able to help them create some incredible memories and we wish them all the very best for the future.”

British Airways is asking customers who have booked a trip with them to email their stories in, in the hope of making their trip a little bit more magical.

Customers can visit the BA Magic page (https://www.britishairways.com/en-gb/destinations/where-in-the-world/bamagic) to watch Lisa’s and Hayley’s video and share their own story.