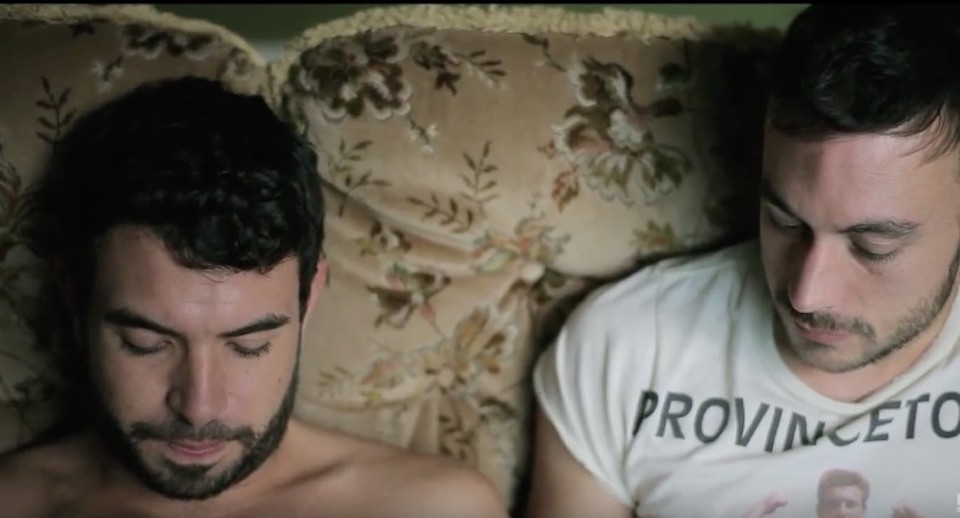 It’s the kind of movie that Hollywood would run a mile from, and that’s a good thing.

It’s quiet, introspective, understatedly self-assured and unhurried. A story about Russell (Tom Cullen), who heads out to a club after a drunken house party with his straight mates. He meets Glen (Chris New). Expecting just a one night stand, their relationship turns into something else.

Russell and Glen are two quite different characters – Russell unassuming, happy to mix in a world of mainly heterosexual coupled family and friends, in their semi detached suburban houses. Quitely apologetic about his sexuality, he lives alone, surrounded by second-hand goods. Even his prowling at the gay bar is underwhelming – resigned to settling for second best, happy to take second prize. Glen, louder, abrasive, politically aware, activist, assured and confident, all banter and words, knows what he wants and isn’t afraid to offend in getting his agenda across. The dramatic foundation of the film comes from the differences between these two newly acquainted lovers. Their differences and their arguments are intense, brief and affectionate.

It’s clear that director/writer Andrew Haigh wanted to take his time to explore young British gay guys over a weekend of booze, drugs and hookups. To delve into their relationship hang-ups, their awkwardness with public displays and unpicking the sometimes complicated rules surrounding brand new relationships and one night stands. Whilst the rest of the cinematic world is bound up in fantasies of heterosexual picket fences and 2.4 children Weekend is the discovery of an alternative love story in 2012. Love Vs. Sex, Marriage Vs. “It’s Complicated” It’s gay life and it doesn’t apologise for that, it’s ok for relationships to begin in a seedy dark club, eyeing each others’ pink bits in the toilet.

Oddly, the film has no soundtrack to speak off, no underlining of key moments, no underscoring of emotions. There aren’t many to underscore. Although Russell’s character is tragic, eking out a childhood in various care homes to living a single, footprint-less life in a tower-block in the suburbs, the film doesn’t allow him to wallow in this backstory. It’s merely presented as fact. The look and feel of the film are artistic and edgy. It looks like it’s been shot using an Instagram effect, pallid and washed out. The frames aren’t always ascetically pleasing, but technically precise, tightly focussing on the observations of its two principles. The editing mixes rough cuts to long extended views. In Hollywood, the creative team would probably focus on some outstanding cloud formations or an interesting arty, out of focus object. But Weekend makes no apology for its simple focus. It’s life. Dull and as messy as life can be on a wet, dreary, October weekend in England.

It’s a confident and welcome move which relies on the superb acting from the two leads Tom Cullen and Chris New, whose performances felt somewhat improvised and therefore played with an edge of reality that you believe that they are in the throes of a brand new relationship. The film leaves a potent silence in the room as the credits roll. A quiet acceptance and understanding creeps over you as the film’s story sinks in and you almost ache at the end for a Hollywood ending. It never comes.

In a brave and raw move, Weekend doesn’t provide our lovers with a happy ending or even a resolution. As with life, things are never wrapped up in a nice neat bow, ready for filing in ‘Happy ever after.’