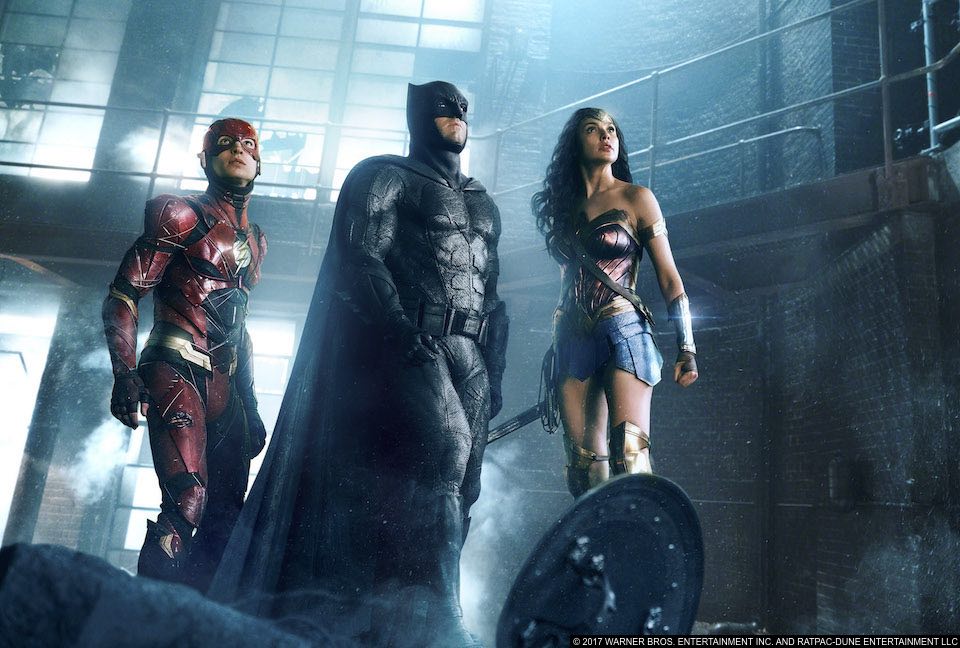 THE JUSTICE LEAGUE – The biggest superheroes in the DC Universe come together Avengers Assemble style as earth is under a massive alien threat yet again and the Marvel lads are all on their hols but can Batman, Wonder Woman, Aquaman, The Flash & Cyborg be able to work together and are they in time…

Spoiler alert the answer is No!

Nutshell – After the death of Batman in the previous film, sacrificing himself saving humankind, Batman is inspired to recruit a reluctant team of superpowered latex clad buddies to deal with an unprecedented outer space threat. The Justice League is formed and after the destruction of Wonder Woman’s island paradise and Aquaman’s submerged home the global chase for three all-powerful MacGuffins is on, watch out for the big surprise guest appearance.

Tagline – ‘Justice For All – You Can’t Save The World Alone’

THEGAYUK Factor – OMG it’s full of great looking guys in hot fetish gear. Led by the fittest guy ever from Game Of Thrones Jason Momoa who is a new gay icon – for us muscle lovers – as Aquaman and his outfit is stunning and boy does it show his ass off along before the many times he strips down to swim. We cannot wait for his stand-alone movie which will be two straight hours of pure Grade A handy shandy material. Add the bulging spandex crutches of Ben Affleck, Henry Cavill, Ezra Miller and Ciaran Hinds and you get one horny film with the bonus of the new queen of camp Gal Gadot and her ring of truth which only makes us think of Momoa’s ass once again.

Cast – Affleck, Gadot, Momoa, Cavill lead the league but we also get Jeremy Irons, Diane Lane, Connie Nielsen, JK Simmons and Amy Adams playing the least sexy Lois Lane – ever – for your ticket price plus another huge star at the end of the final credits.

Budget – An absolutely massive $300 Million which is less than many countries earn in a year – its a cliché but most of it is on the screen with very big production scenes maybe more should have been spent on the script though, which brings a whole new meaning to the word formulaic.

Best Bit – 0.21 mins; When Aquaman strips off for the first time showing his many tatt’s and boy does he take his time otherwise the battle and chase of Wonder Woman’s Amazonian tribe on horseback is by far the best action beat.

Worst Bit – 0.19 mins and 0.34 mins and 0.48 mins…..; Basically every time the Flash comes on the screen, he is weak, his scenes are weak and he is less Premier League and more like Southern Conference League up against everyone else here and anyway Superman is faster so whats the point of him? He probably suffers from premature ejaculation too.

Further Viewing – Really!!! With over 50 films featuring the superheroes above just go to Google and type in stretched spandex over bulging crutch movies and whilst you are there just search for Marvel or DC Comics and you will have two weeks worth of identical movies to watch with everyone saving the world each and every fucking time in just under two hours.

Any Good – This is a very expensive perfectly adequate film, you will smile, laugh, get excited and be entertained throughout, the trouble is it is just so damn generic and we have seen it all so many times before. A magical object is hidden on earth that can now destroy us all and good guys/bad guys with whatever powers they need to survive 50 rounds of unrealistic fighting and nobody ever seems to get injured or hospitalised. It’s all about as realistic as a Donald Trump promise to protect LGBT+ rights. Do stay right to the end of the credits as the last secret scene is well worth the 10-minute screen scroll wait and it gives a huge clue as to where we are all going next as if six superheroes in one film weren’t enough?